At 5 in the morning I woke up from frantic ringing of the door bell and Eslie running around, making noise, and shouting that we should get up. Groggy and unaware of what was going on, I put one foot on the floor and immediately stepped into water.

In the kitchen, water was gushing out of a grey hosepipe that was sticking out on the floor below the washing machine. Something must have burst somehow while we were sleeping. The water was already about 1 cm high everywhere and rising quickly: 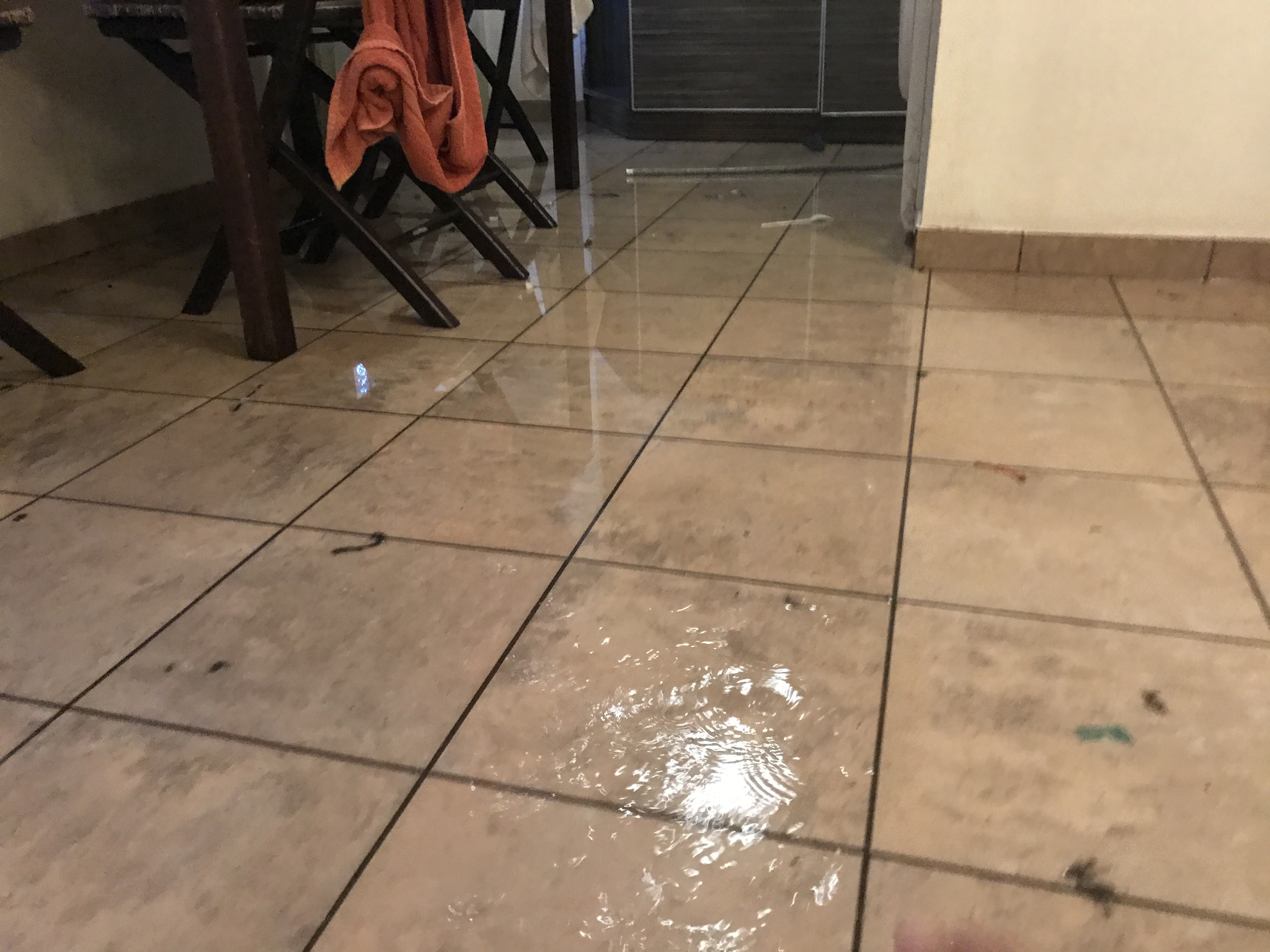 We managed to find the main water valve in the bathroom and close it. Someone was still frantically ringing the doorbell. I opened the door; it was the guy from below. He led me downstairs into his flat. In his bedroom, the water was literally raining down from the ceiling. Poor guy.

Everything was messy and chaotic. I could not reach anyone on the phone as it was too early in the morning. We started cleaning up. Eslie’s and Zsolt’s iPhones were swimming in the water and took damage, which really sucks. Many other things were wet: books, my backpack with my clothes, etc. We spent about an hour mopping up all the water and rescuing our stuff. Then, finally, I reached the landlady on the phone. She sent for someone to fix the water. I said we couldn’t wait for them because we had to leave for our pre-booked Chernobyl tour.

We left around 6:45am because we had to be at the main railway station at 7:30am for the Chernobyl tour bus. (Chernobyl and the 30 km zone around it can only be visited as part of such a tour, and not individually.) We had pre-booked a one-day tour with a Ukrainian tour operator.

The tour was an absolutely unique experience. The Zone is easily one of the most impressive and weird places I have ever seen in my life. This should totally go onto the list of places to see before you die. We were lucky: our tour group was very small. Just us, our guide (also called Timur) – a really easy-going guy full of interesting information – the driver, and only one other tourist, a dude from Latvia. So it was quite intimate. To save some money, we booked the Russian-speaking tour instead of the English-speaking tour, and I was translating everything to Zsolt and Eslie. This was a lot of fun and a great decision, as the English-speaking group was much larger and driving around in a large bus, while we had a small van. Our guide Timur did a great job with the schedule, timing it in such a way that we almost never bumped into the other, bigger groups and it felt like we had the whole Zone to ourselves.

Here are some pictures. 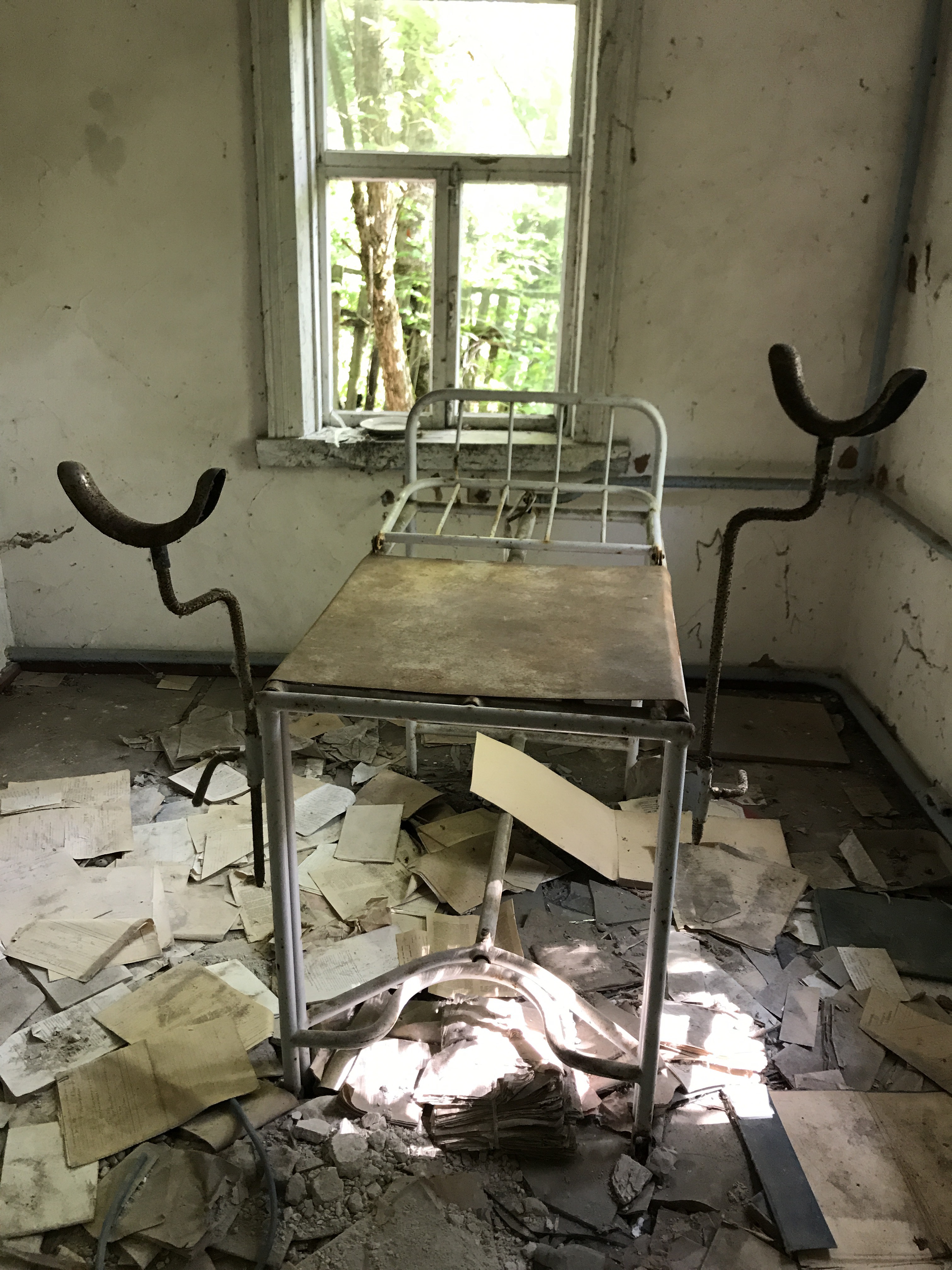 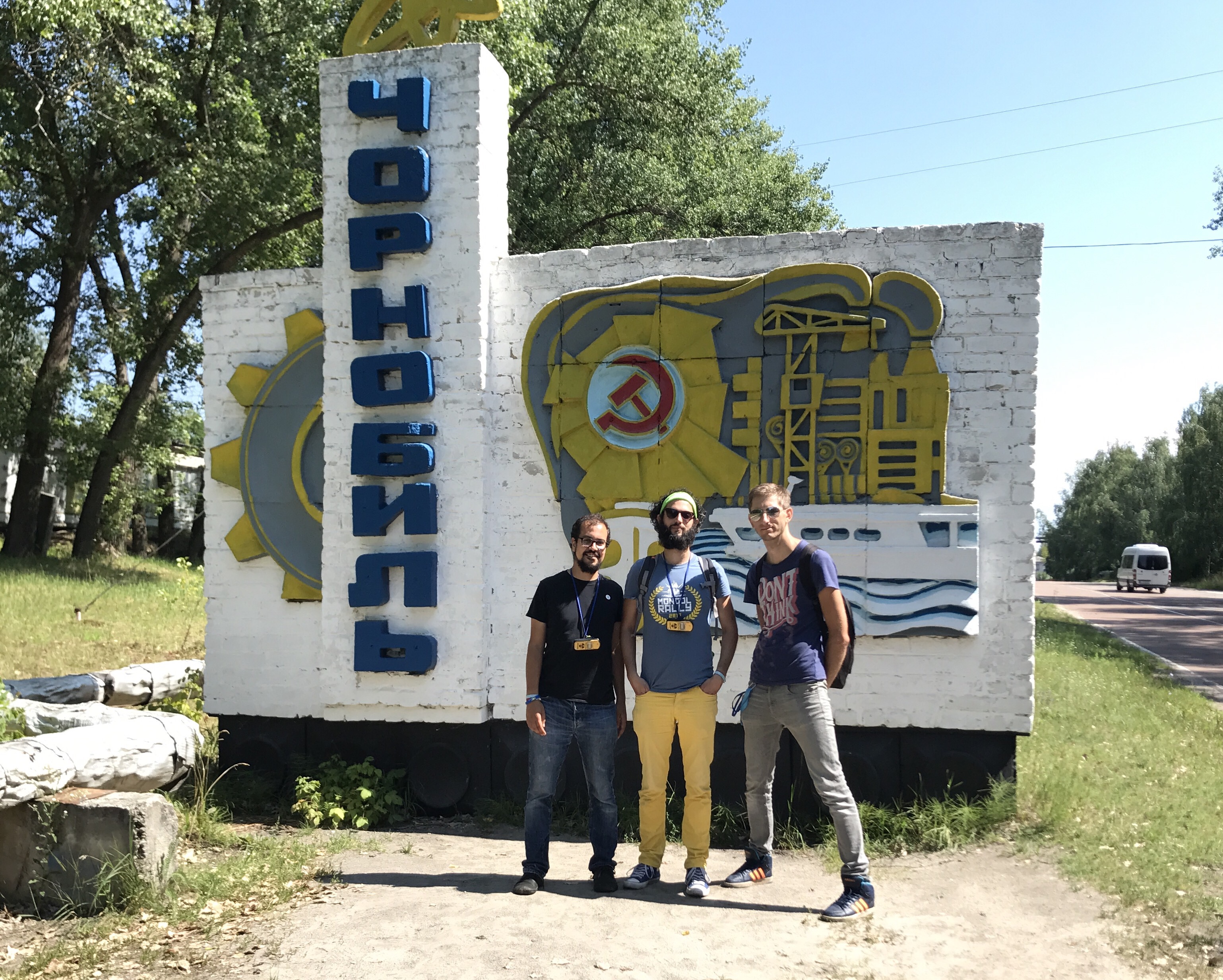 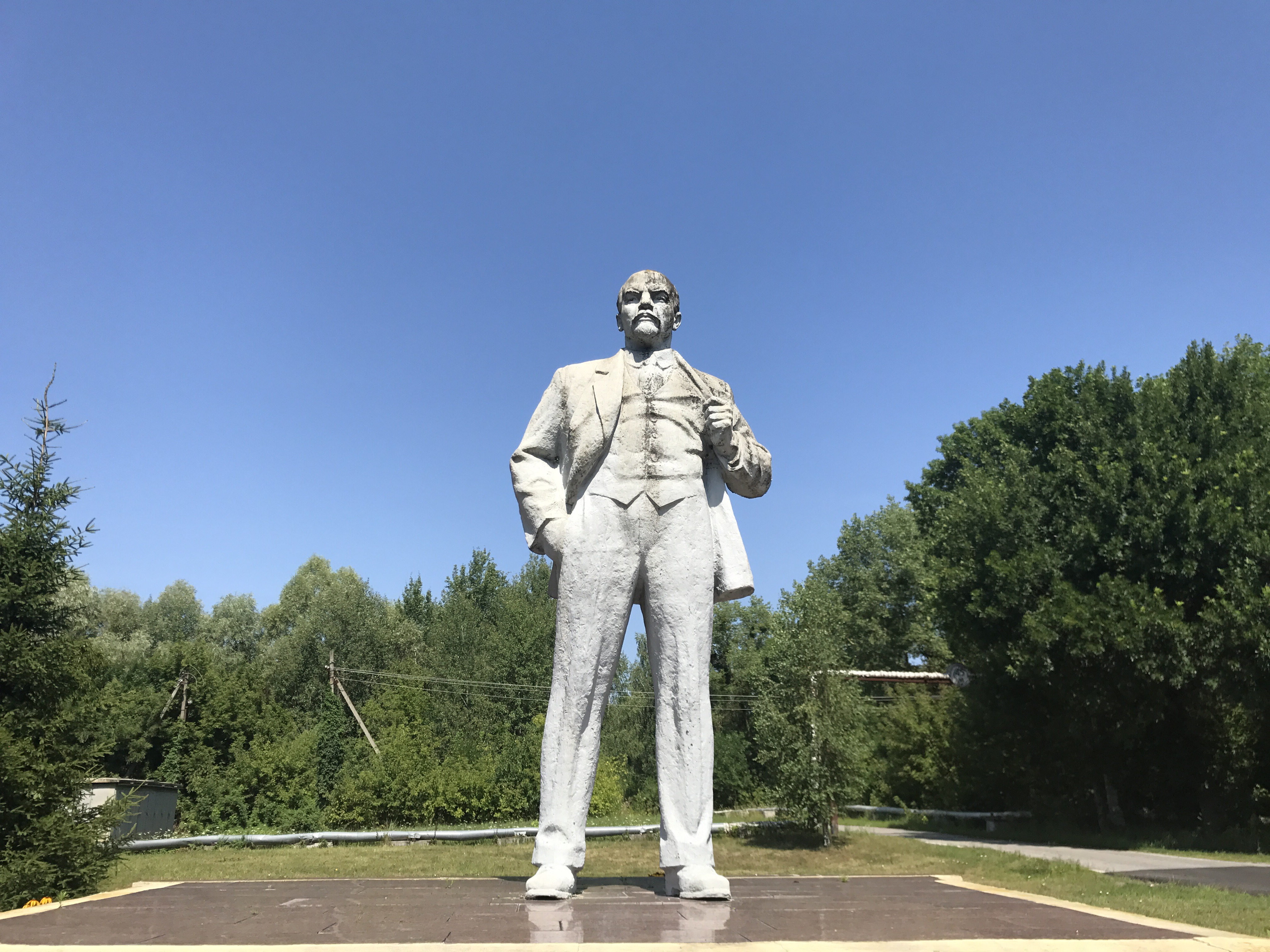 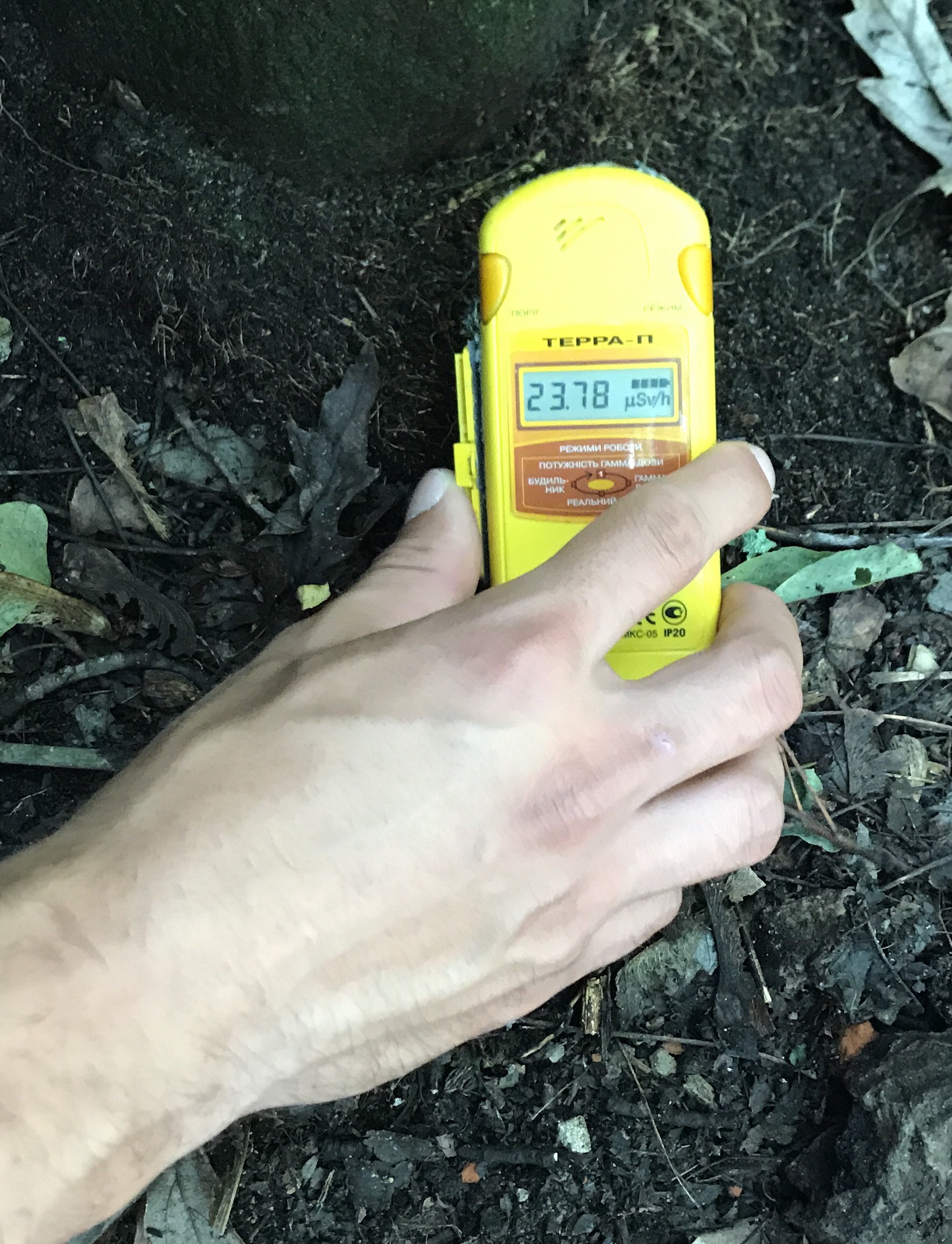 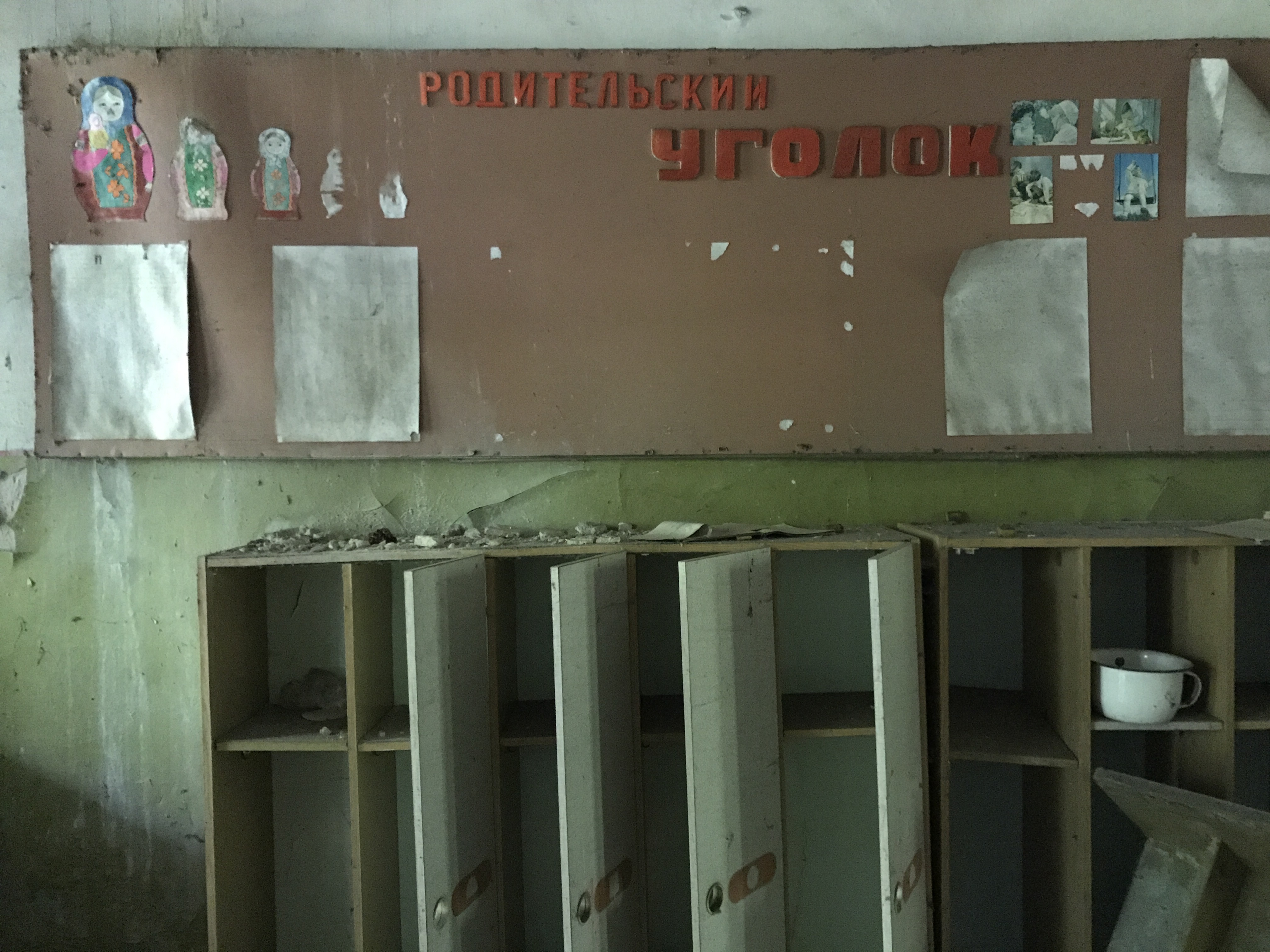 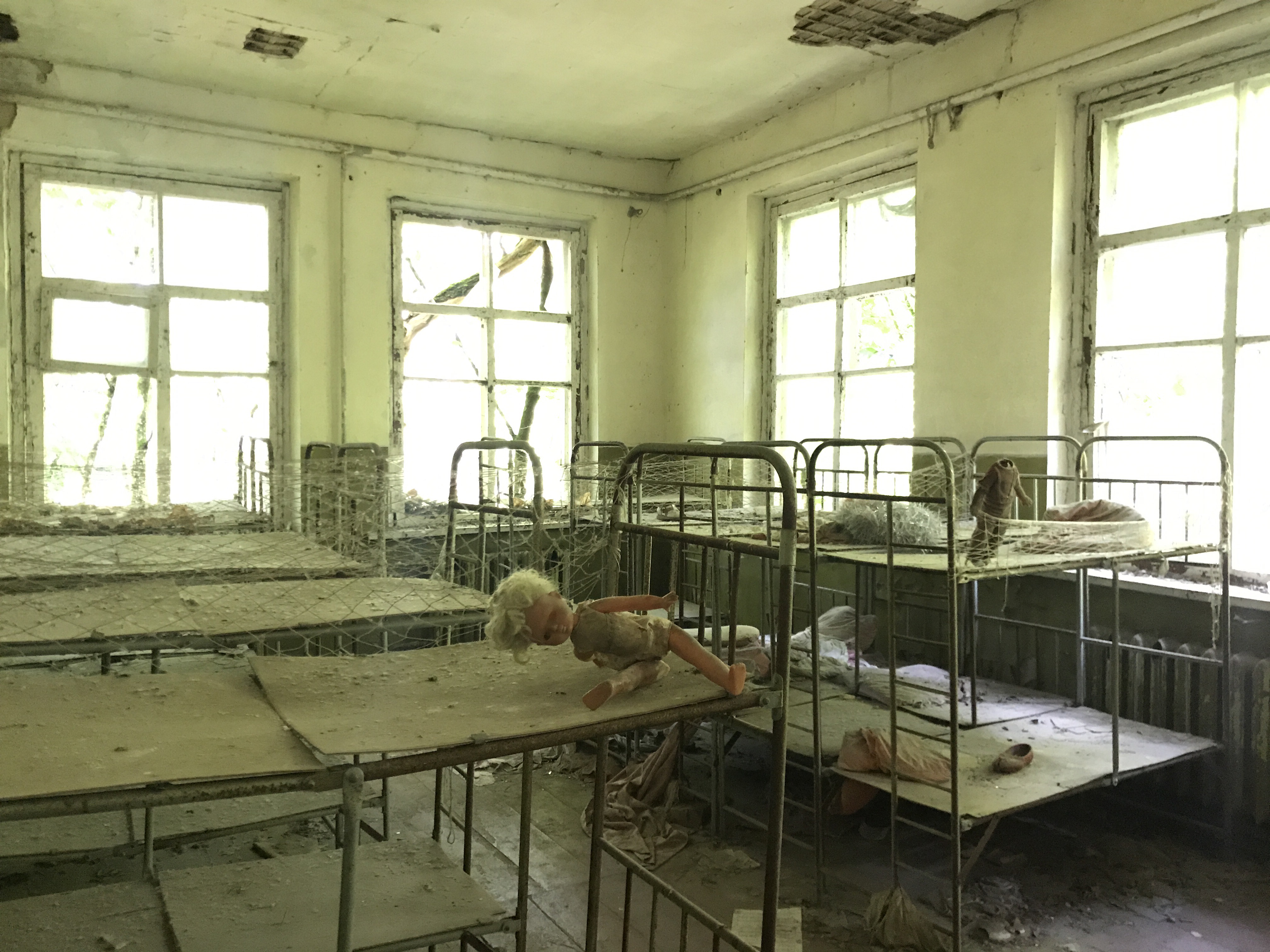 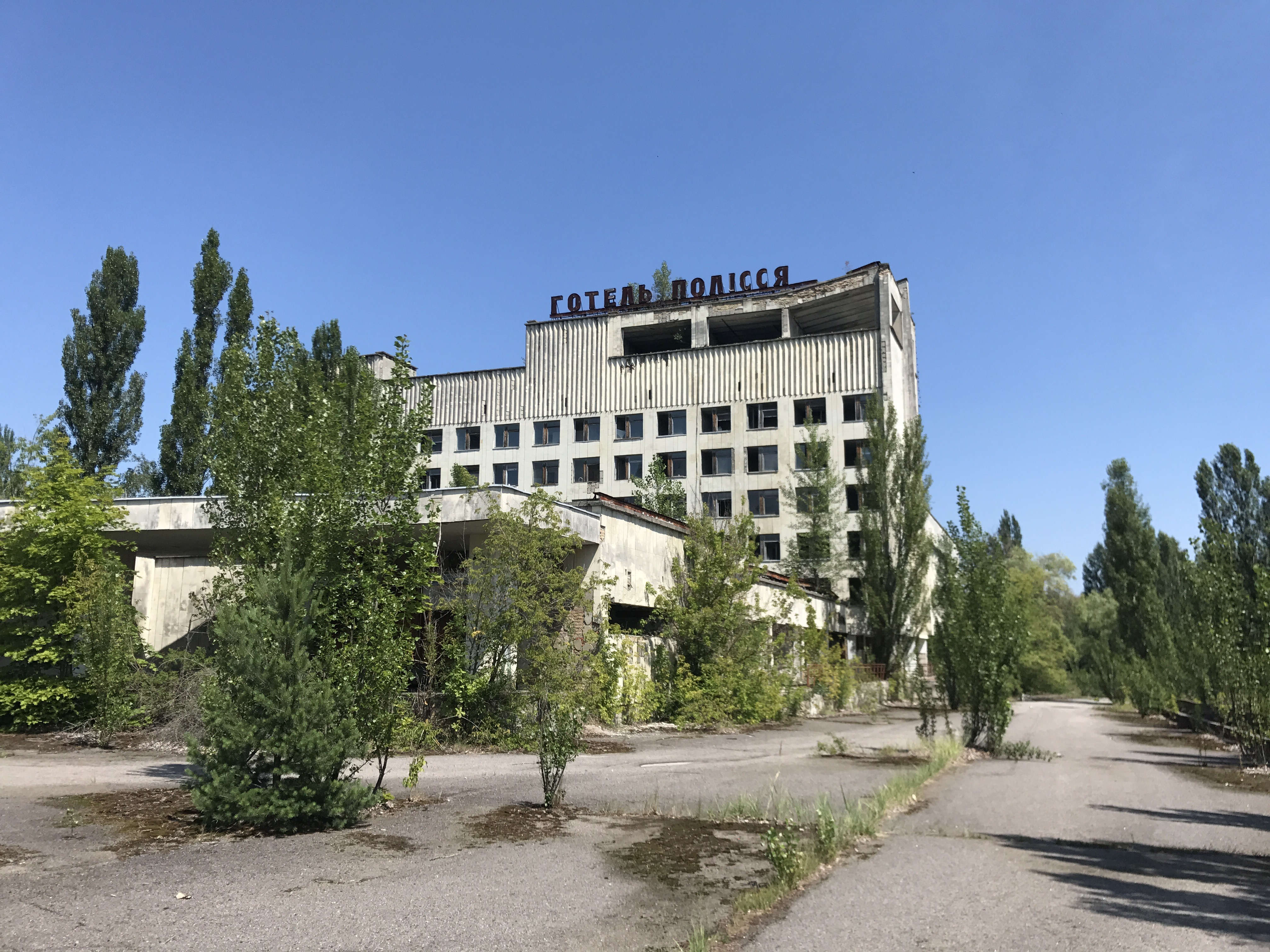 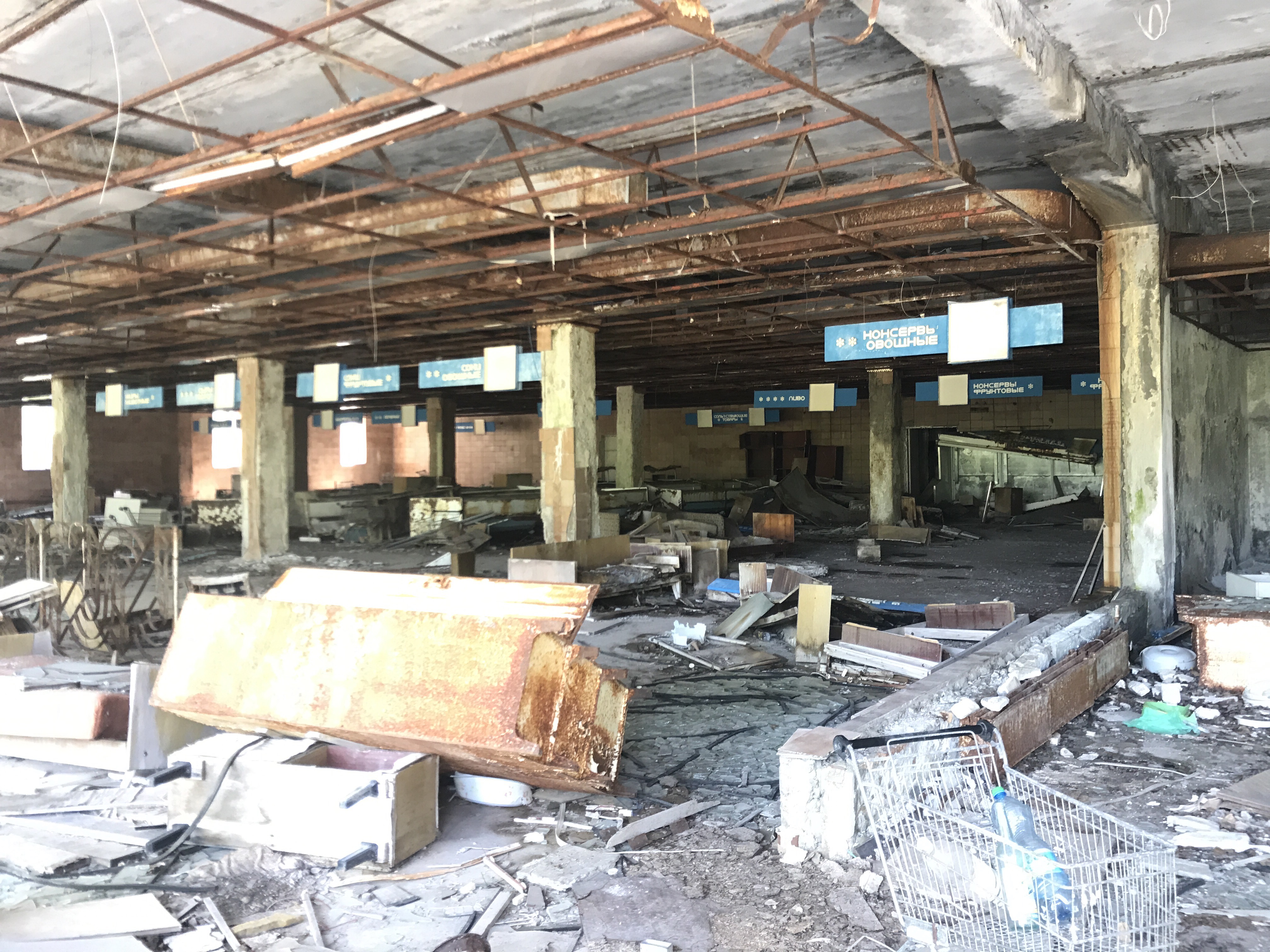 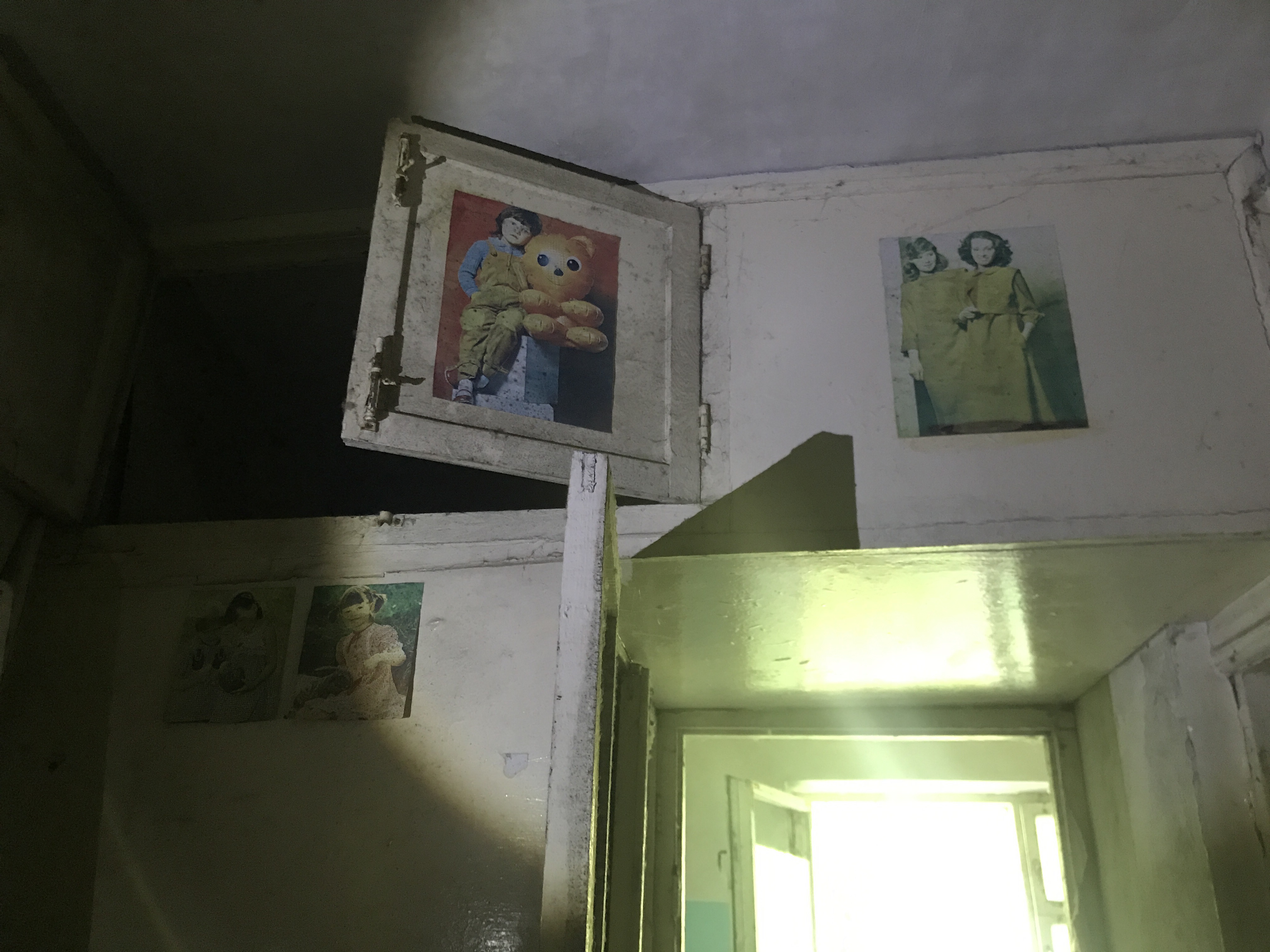 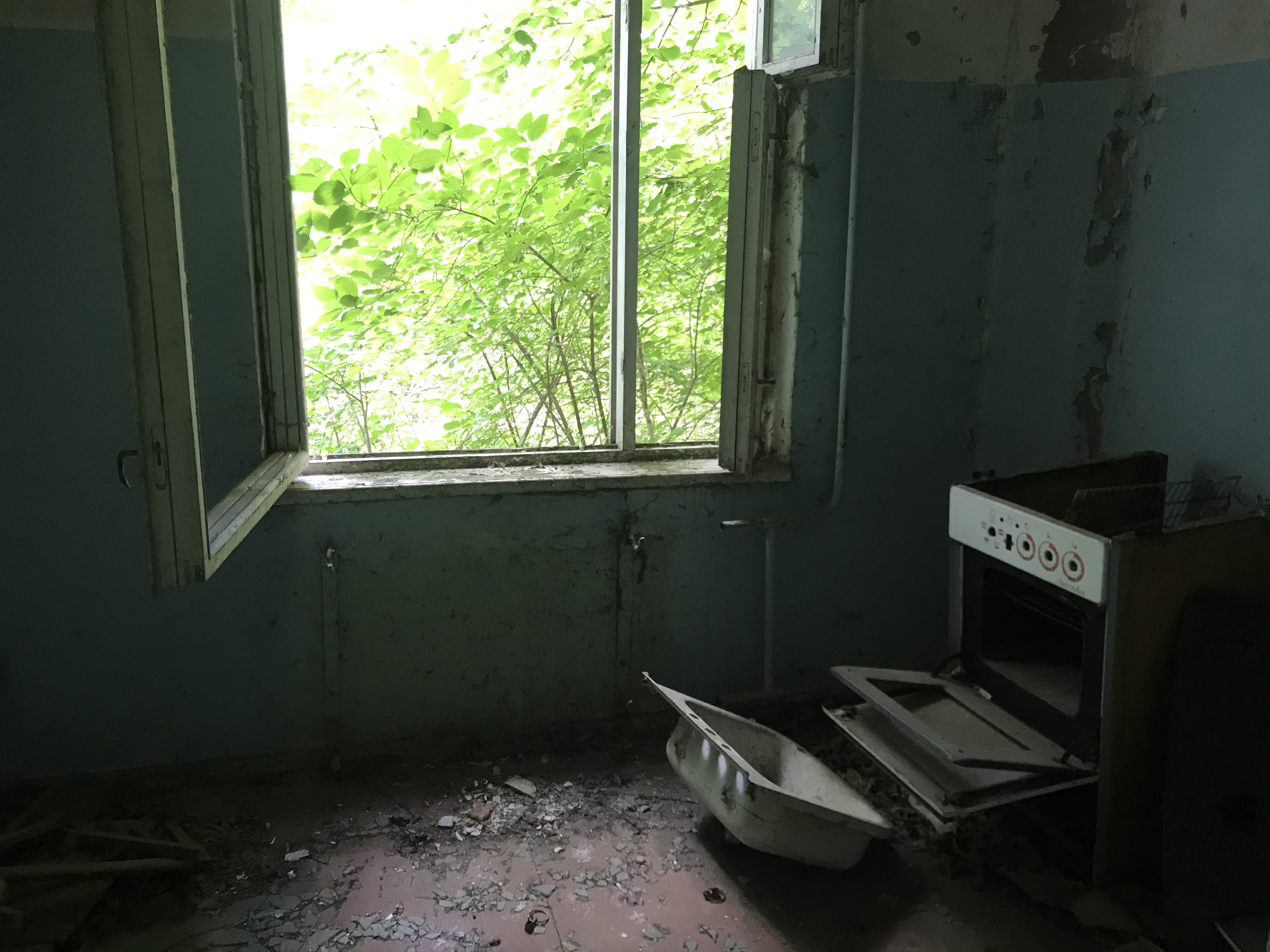 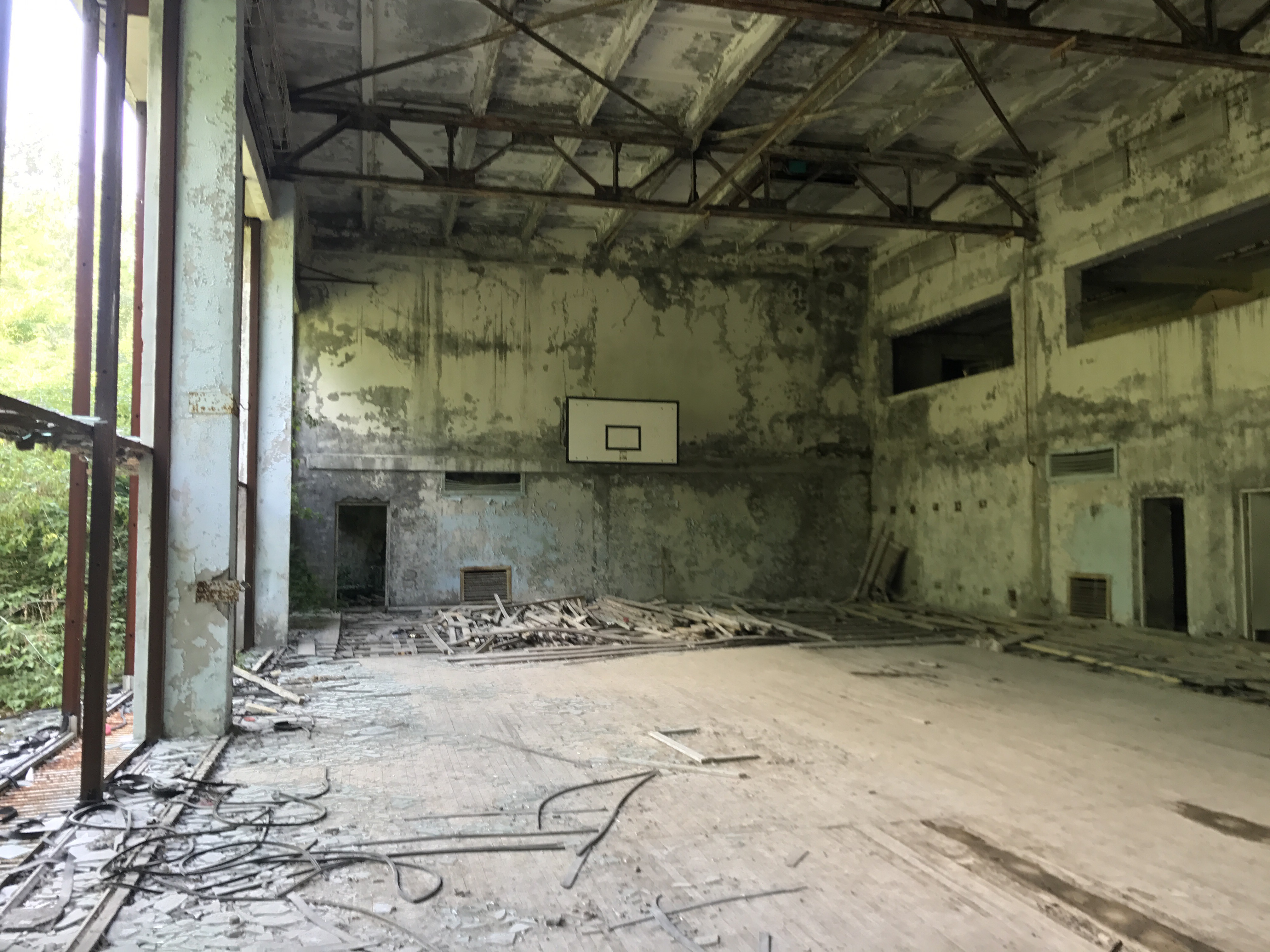 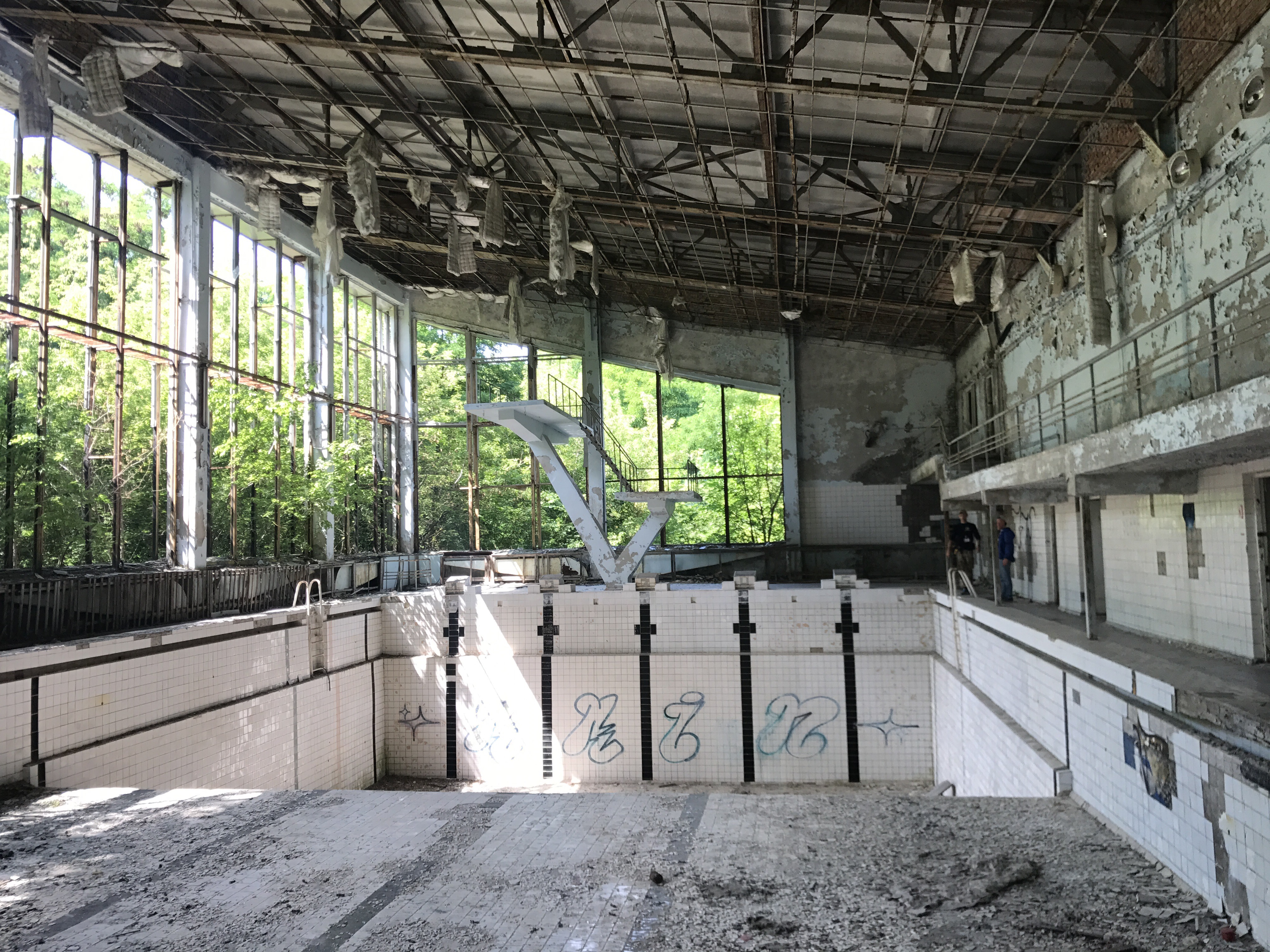 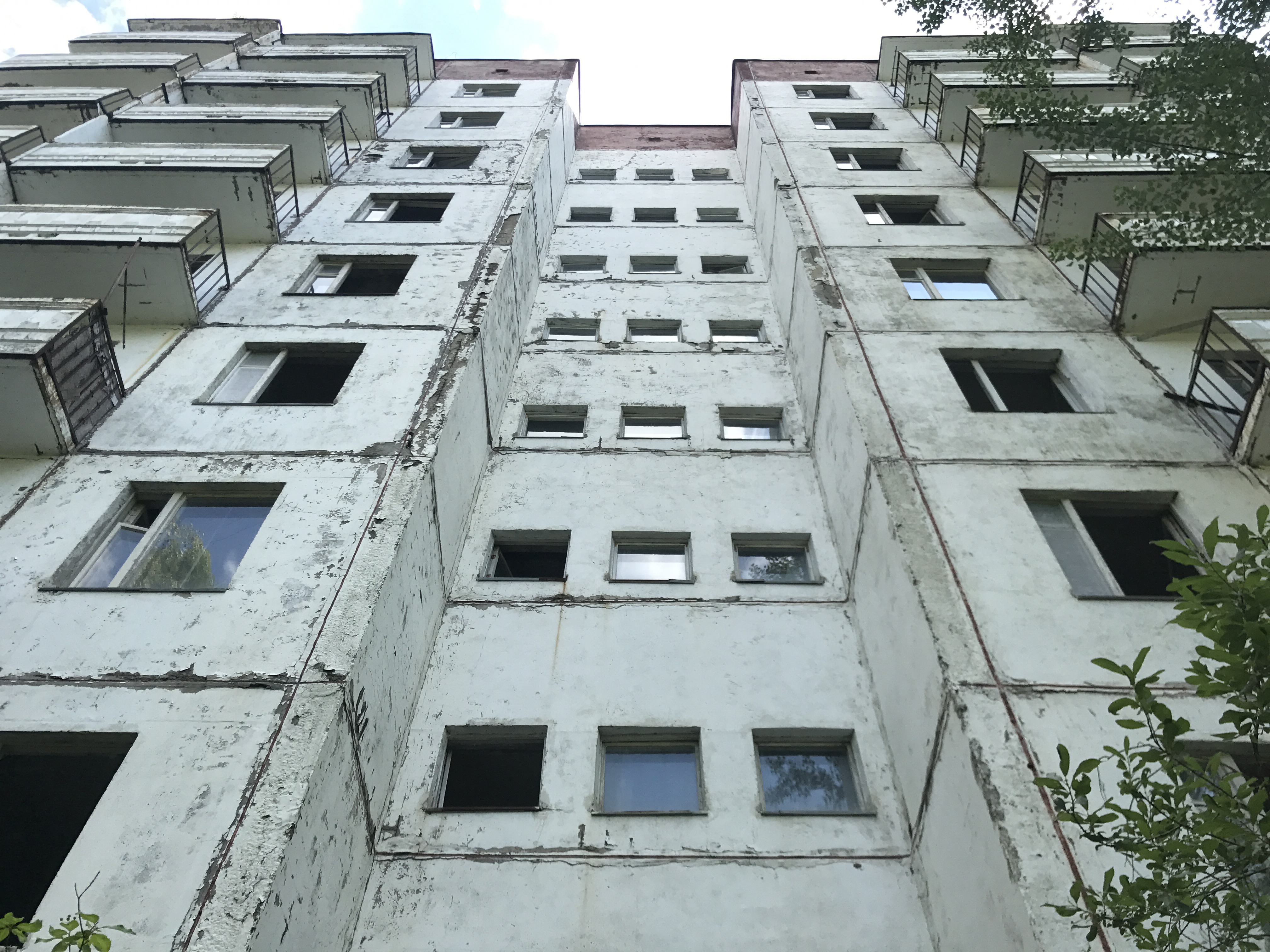 We started with a few abandoned villages. Then we visited the town of Chernobyl and did a great team photo in front of the town sign. We continued to the ghost town of Pripyat. This was definitely the highlight of the tour. A city of 50,000 people until the nuclear accident in 1986, nature now took over. The city is decaying and overgrowing with forest. We saw abandoned houses, went inside some of the flats, there was a huge ruined supermarket and the famous swimming pool. The intense, ghoulish atmosphere of this place cannot be adequately described in words or photos; you have to experience it on your own. Wandering through the decaying overgrown city, you might at first be reminded of some post-apocalyptic sci-fi film or video game, only to realise how real the tragedy was that befell this city.

In Pripyat we also finally had our first encounter with bears: 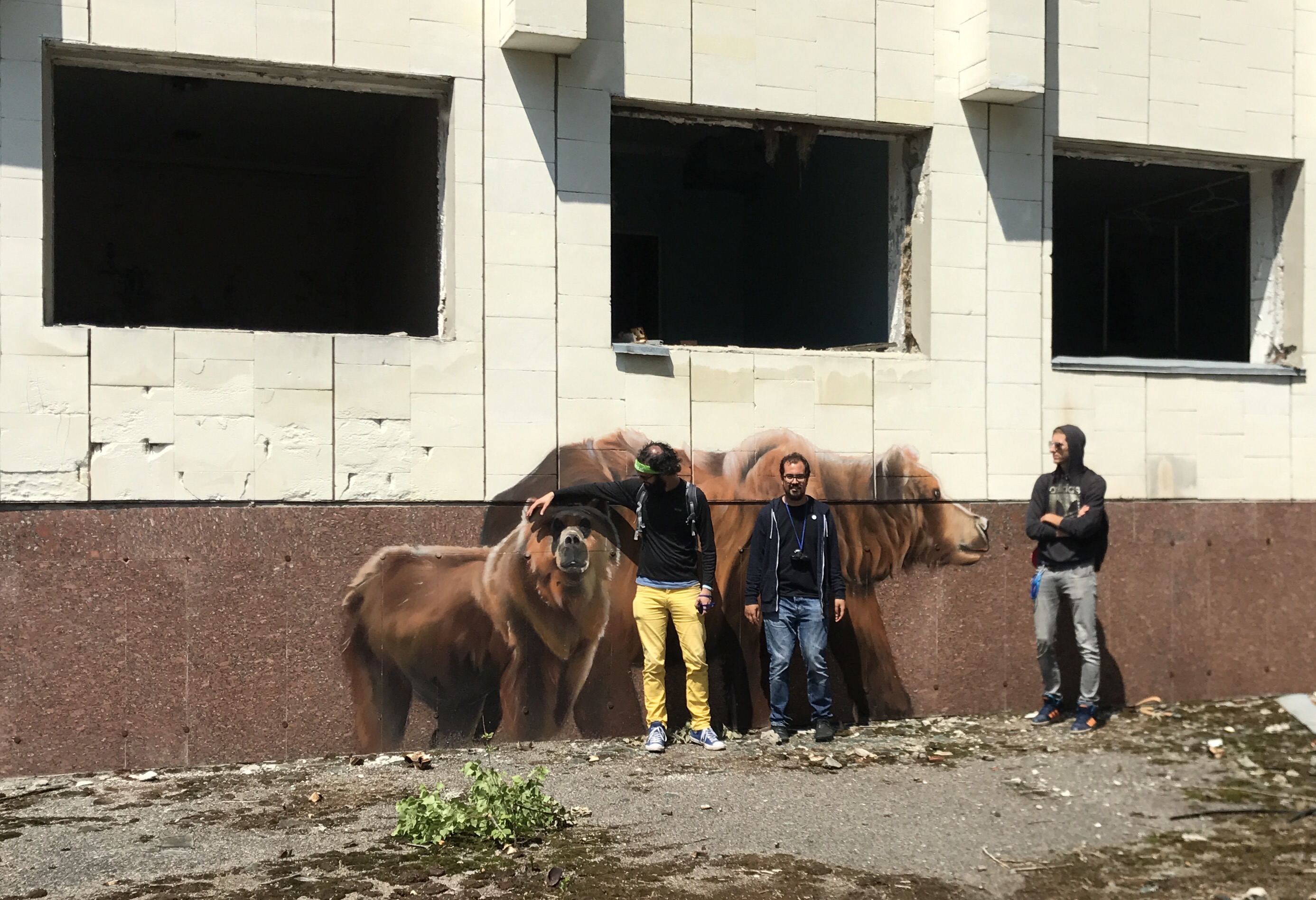 After having lunch in a comically retro-Soviet cafeteria, we checked out the actual nuclear power plant with the brand new dome that has been put around the exploded block four just last year. (The locals call it “the farm”.) We then spent some time feeding some nuclear giant fish swimming in the river. 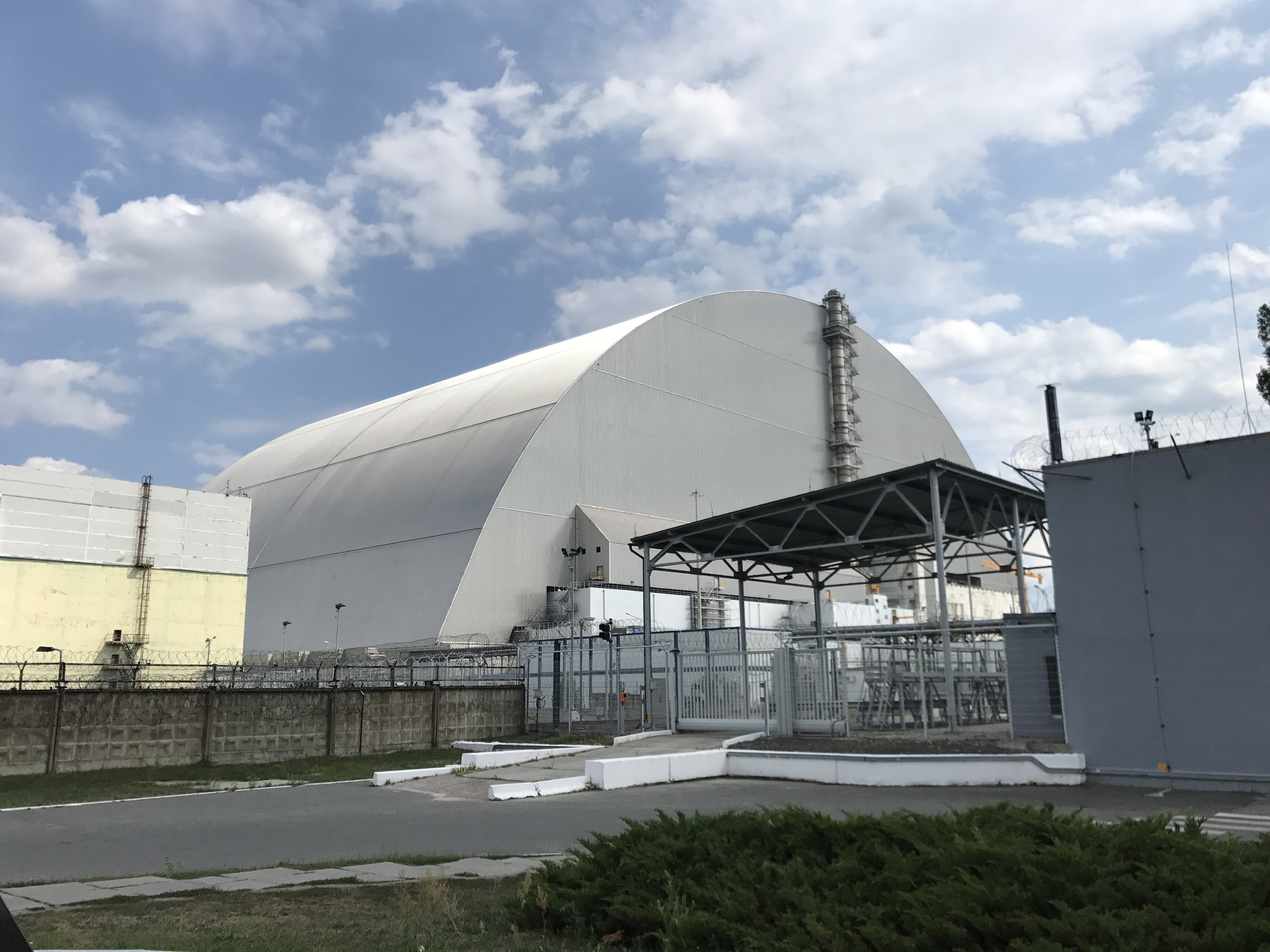 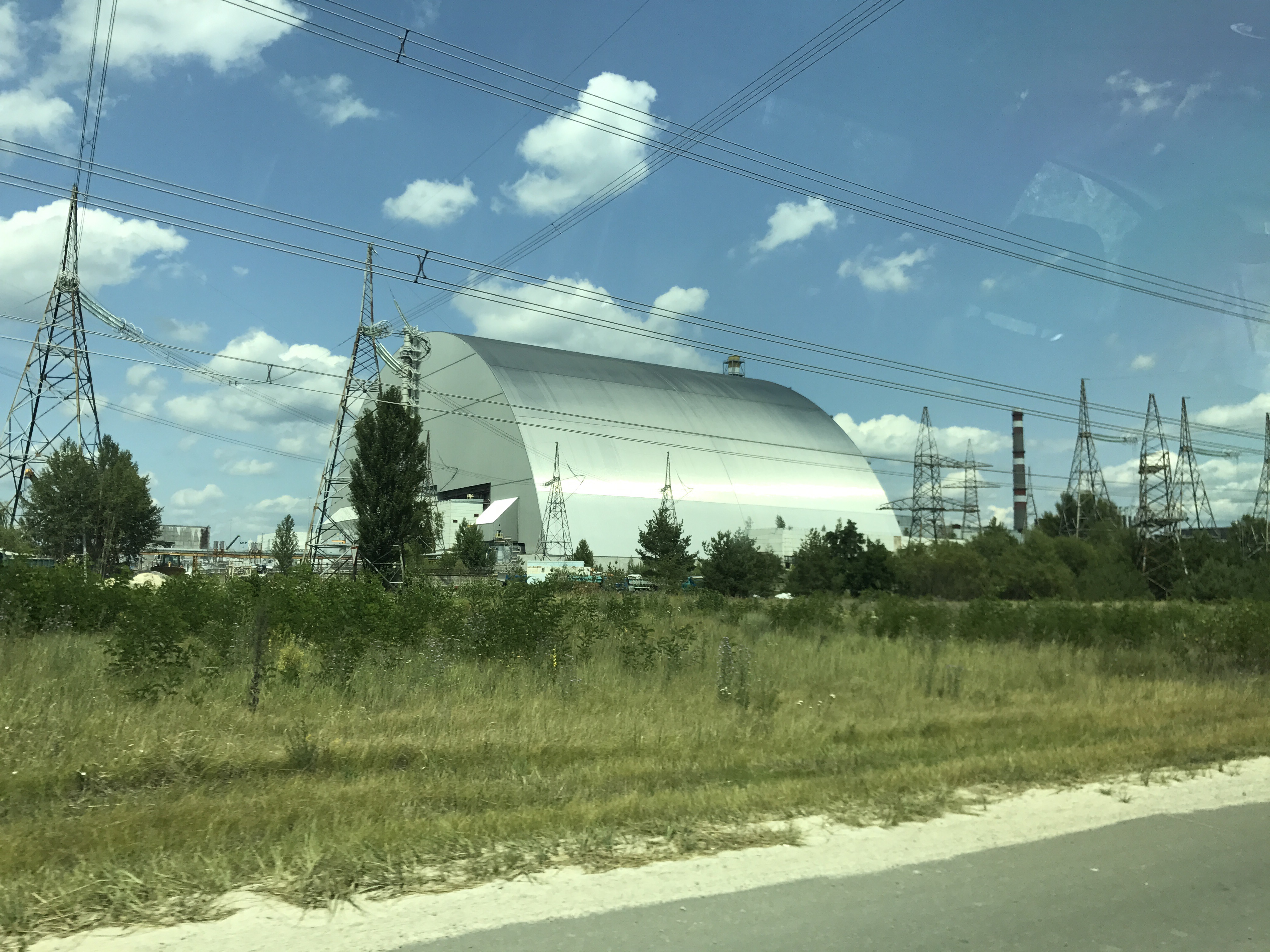 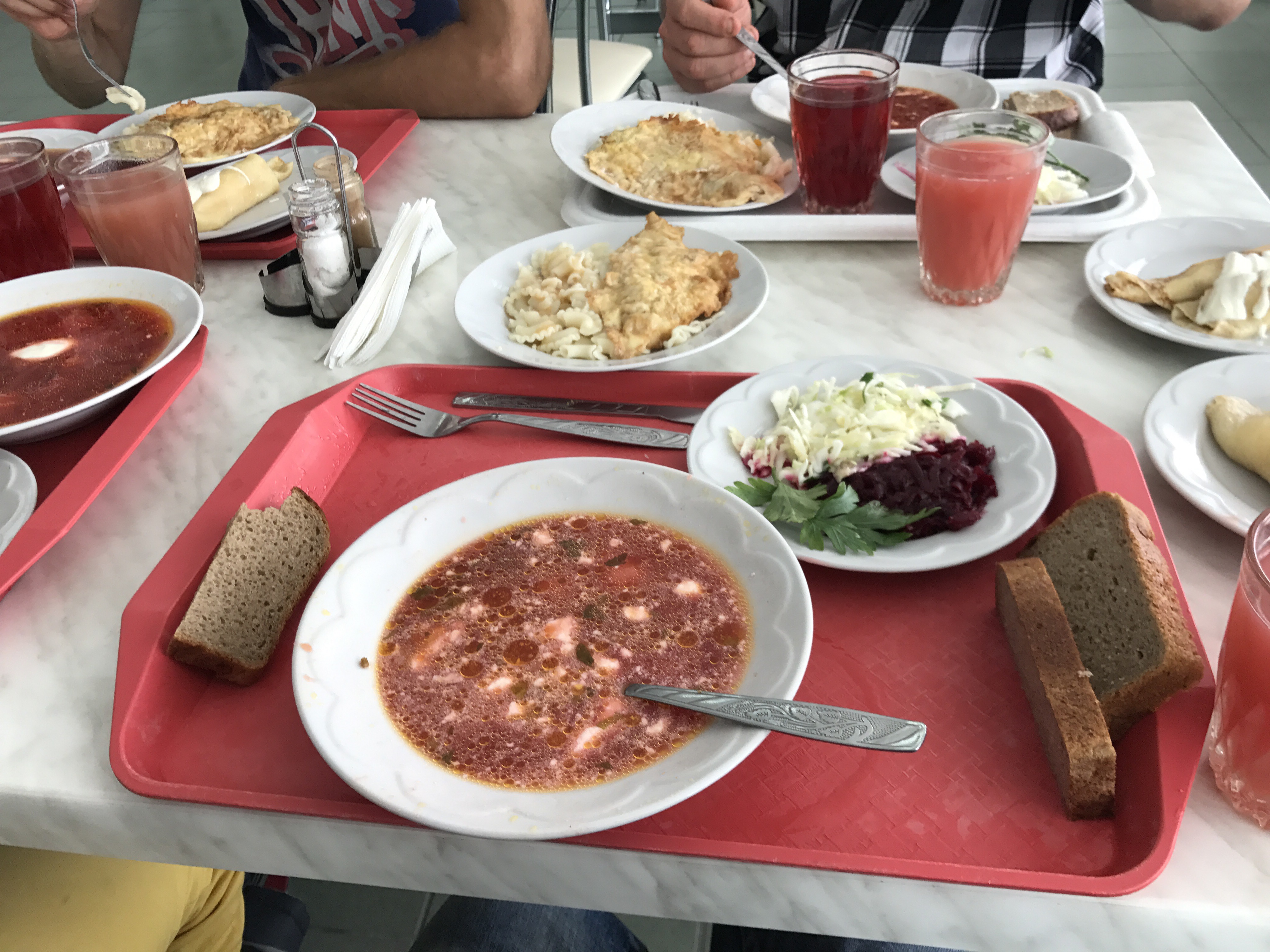 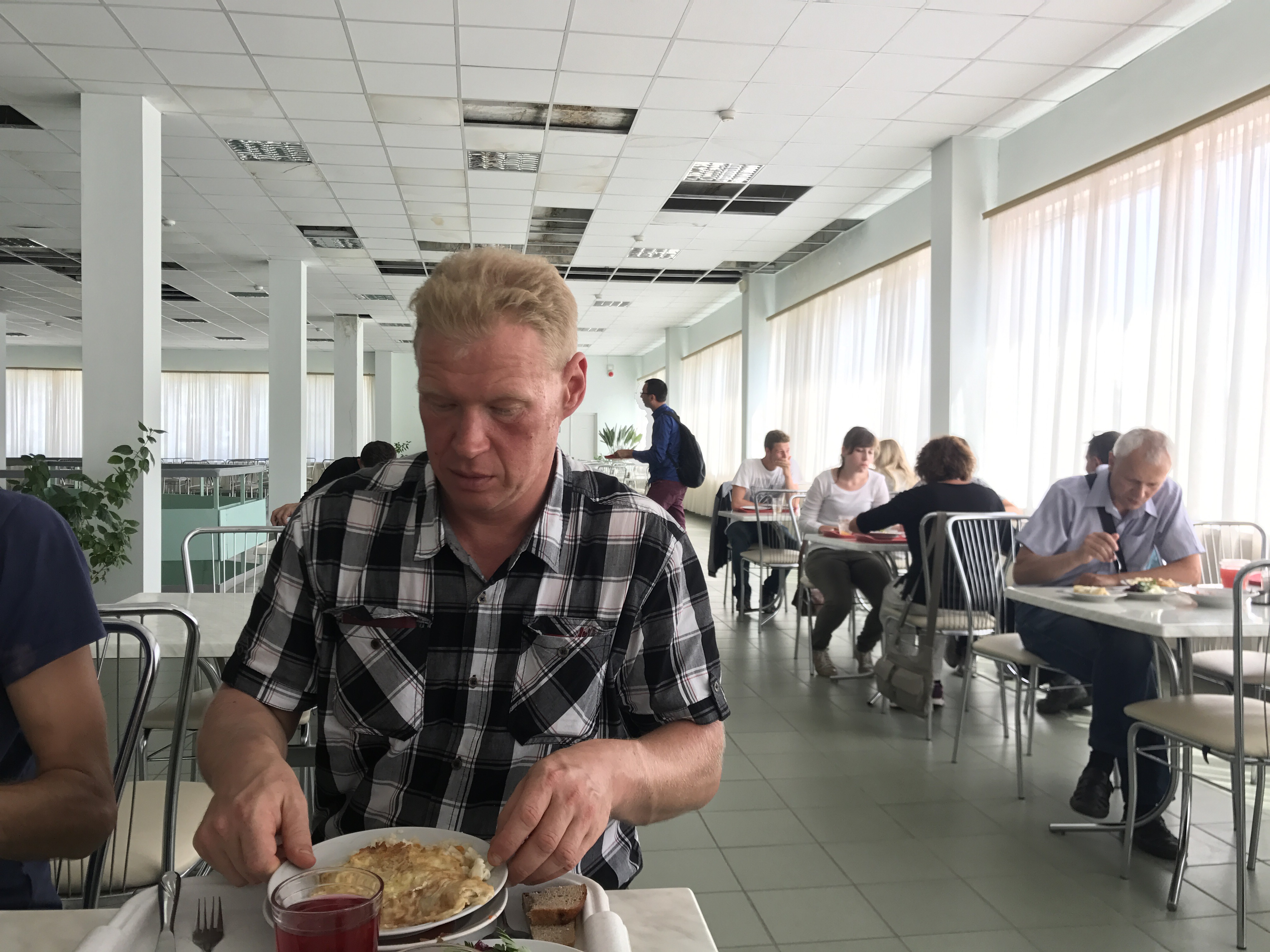 After this came the other highlight of the day: a gigantic radar antenna array, hidden in the forest, used in the cold war for detecting ICBMs coming from America, and abandoned after the nuclear disaster. The array is a gigantic rusty steel construction with towers, antennas, and wires 150 metres high and 750 metres wide. It is impossible to capture the giant size in pictures, but it is easily one of the most impressive structures I have ever seen in my life. It is possible to climb it all the way to the top, apparently the view from the top is breathtaking. Unfortunately we didn’t have time on this tour to climb the thing, but I am seriously considering coming back one day just for this!

At the base of the array was the computer room, a 750 m long concrete tunnel that used to house all the supercomputers that were analysing the data. Now it’s abandoned and filled with piles of rusty old 80s PCBs and other pieces lying around. 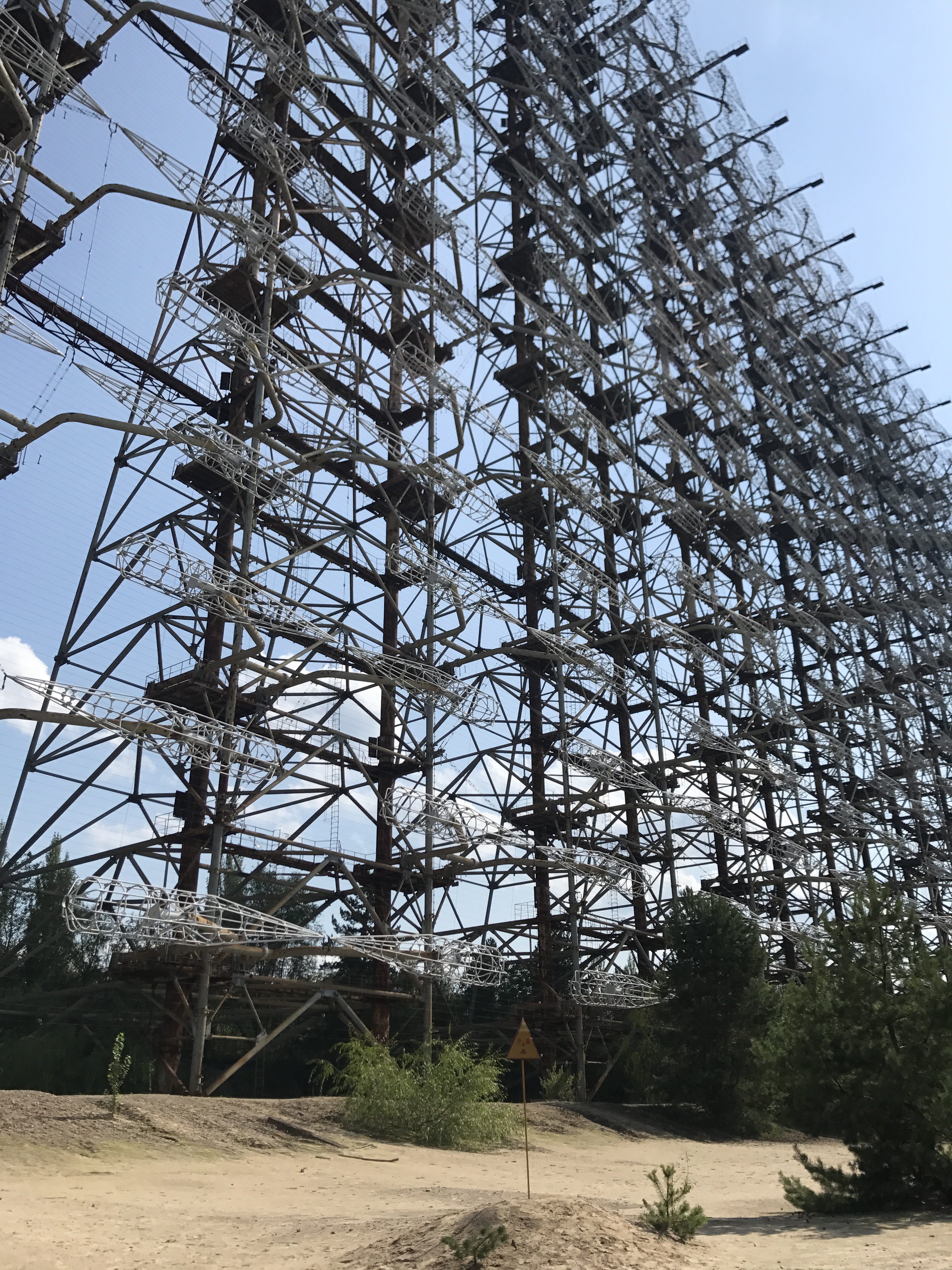 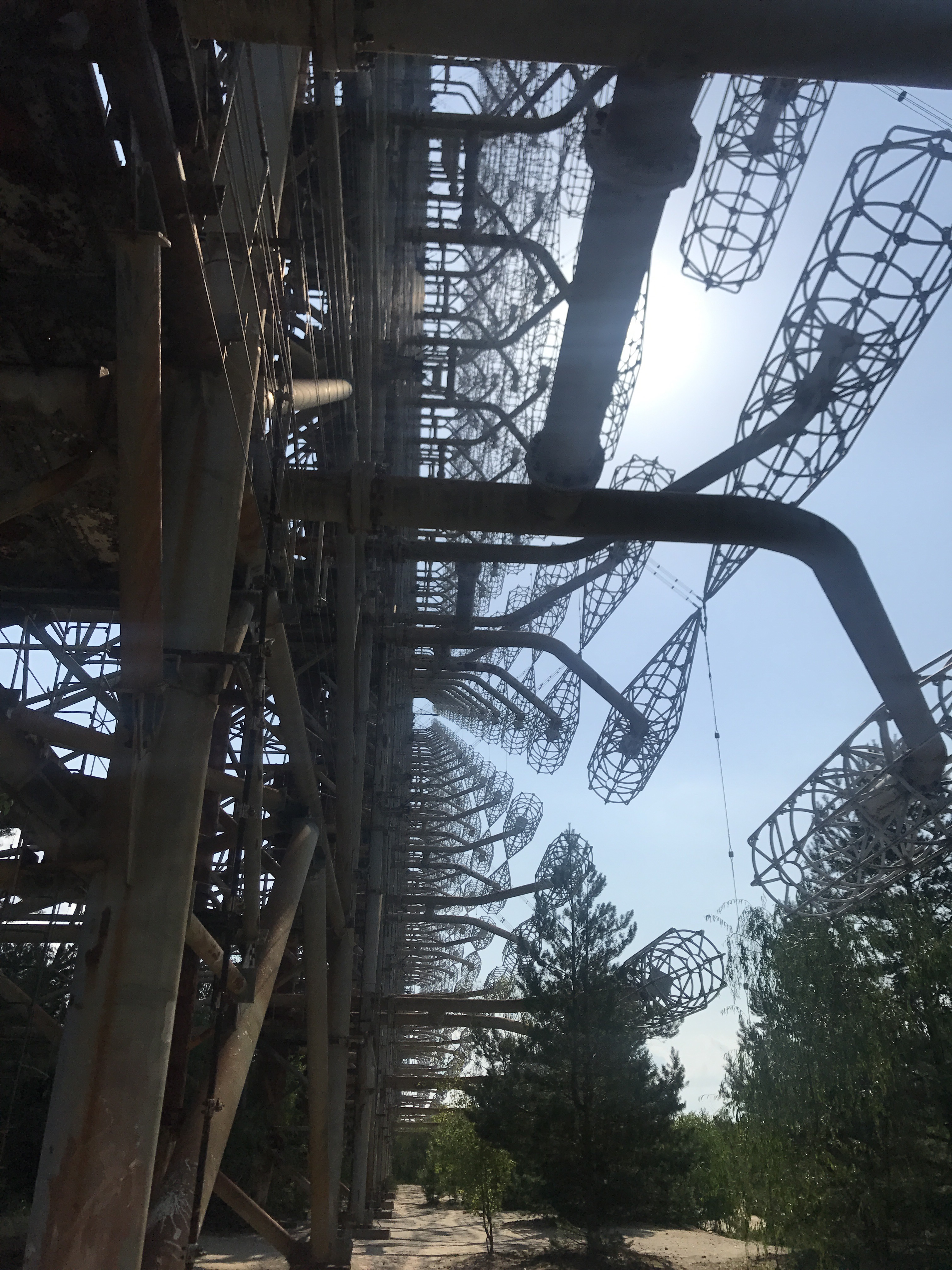 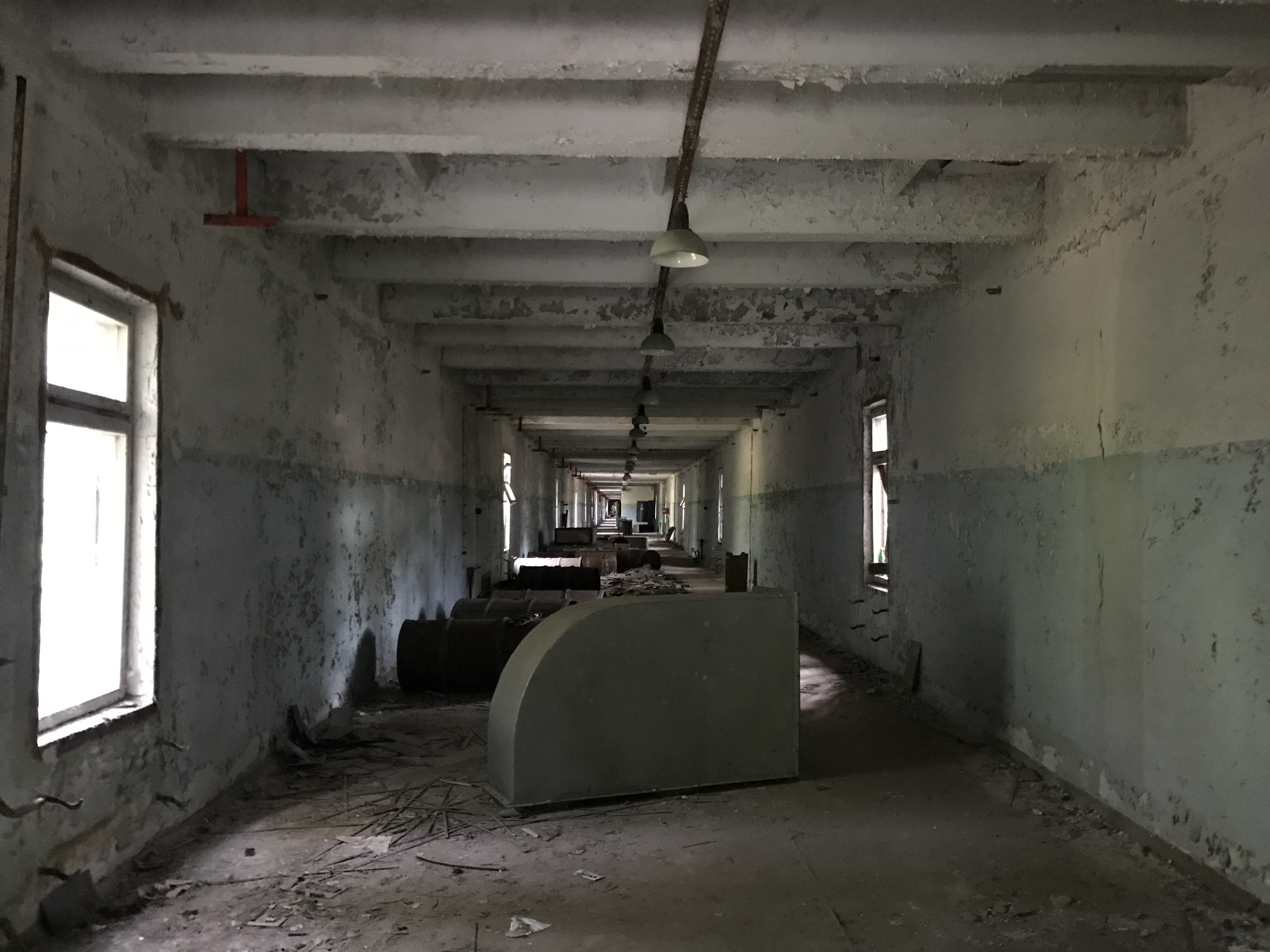 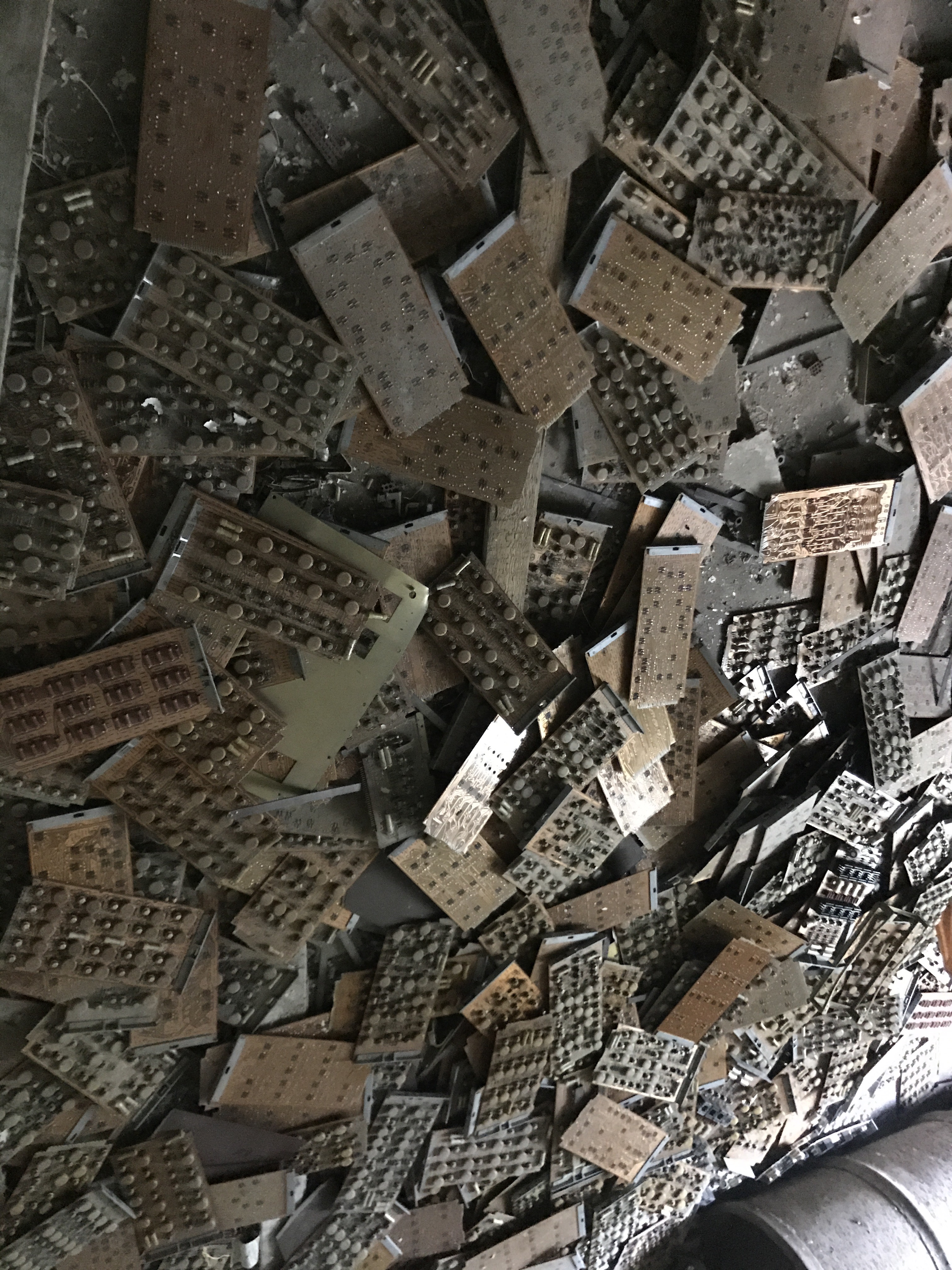 We were back in Kiev around 8pm. When we came back to the flat, it turned out that they had magically fixed the water and cleaned up everything, so we could finally take some showers after this long and very hot and sweaty day (in Pripyat, the rule is that you have to always walk around with long trousers and long sleeves, because of the radiation, despite the heat, which today was around +35 °C). The electricity cut out three more times while we were taking turns showering, but now we knew where the switch was to bring it back.

As it became dark, we left the flat and sat down in a restaurant nearby to have a nice dinner and, finally, some rounds of proper Ukrainian vodka: 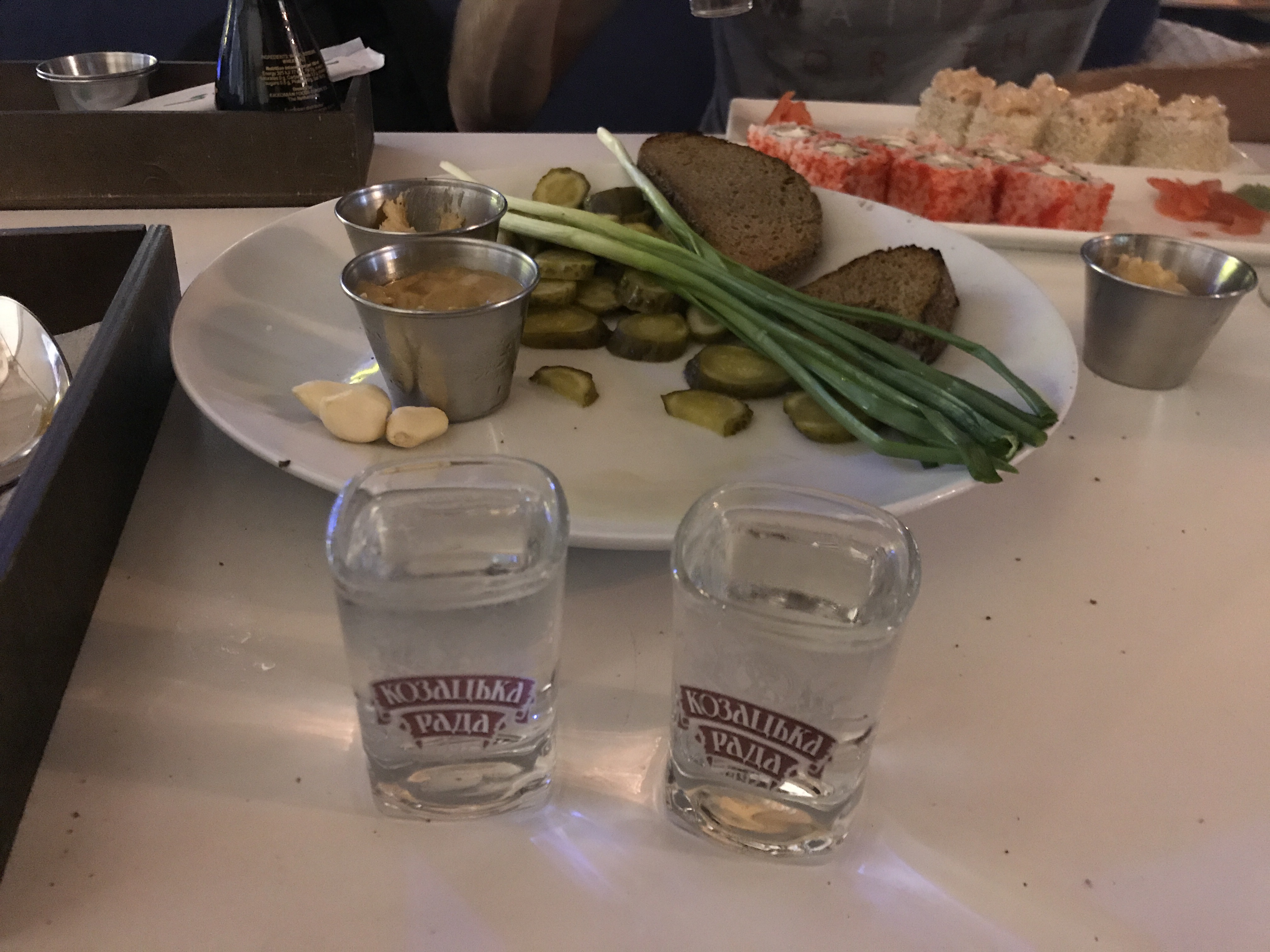 Tomorrow we will be heading to the Russian border. See you (hopefully) on the other side!

If you are following this blog, please consider donating to our Mongol Rally fundraising campaign by clicking here.

We need to raise £1000 for Cool Earth before we reach the finish line in August, and we’re at £640 at the time of writing, so we definitely still need your help!