We arrived at the Russian-Kazakh border in Kotyayevka at the crack of dawn. It turned out that the border actually operates 24 hours (and not “during daylight”) so we could cross immediately. There was no queue so we immediately proceeded to the Russian border checks. They were again very friendly. The young lady stamping our passports was very curious. She asked us in detail about our onward route, and especially liked the charity aspect of the Mongol Rally. She said we chose the worst possible route, as the road onward to Atyrau is in an awful condition. She also noticed that Zsolt didn’t have a Russian visa for his next entry. We told her we were planning to get him a visa at a Russian consulate in one of the Central Asian capitals we would be driving through. She recommended Dushanbe and said it should be possible there to “dogovoritsa” (a Russian term for bypassing a rule by reaching a mutual agreement with the authorities, usually involving a bribe). In the end the Russians wished us good luck and let us go.

We drove through 9km of no man’s land, careful not to hit the horses that were crossing the road, and arrived at the Kazakh side just as the sun rose: 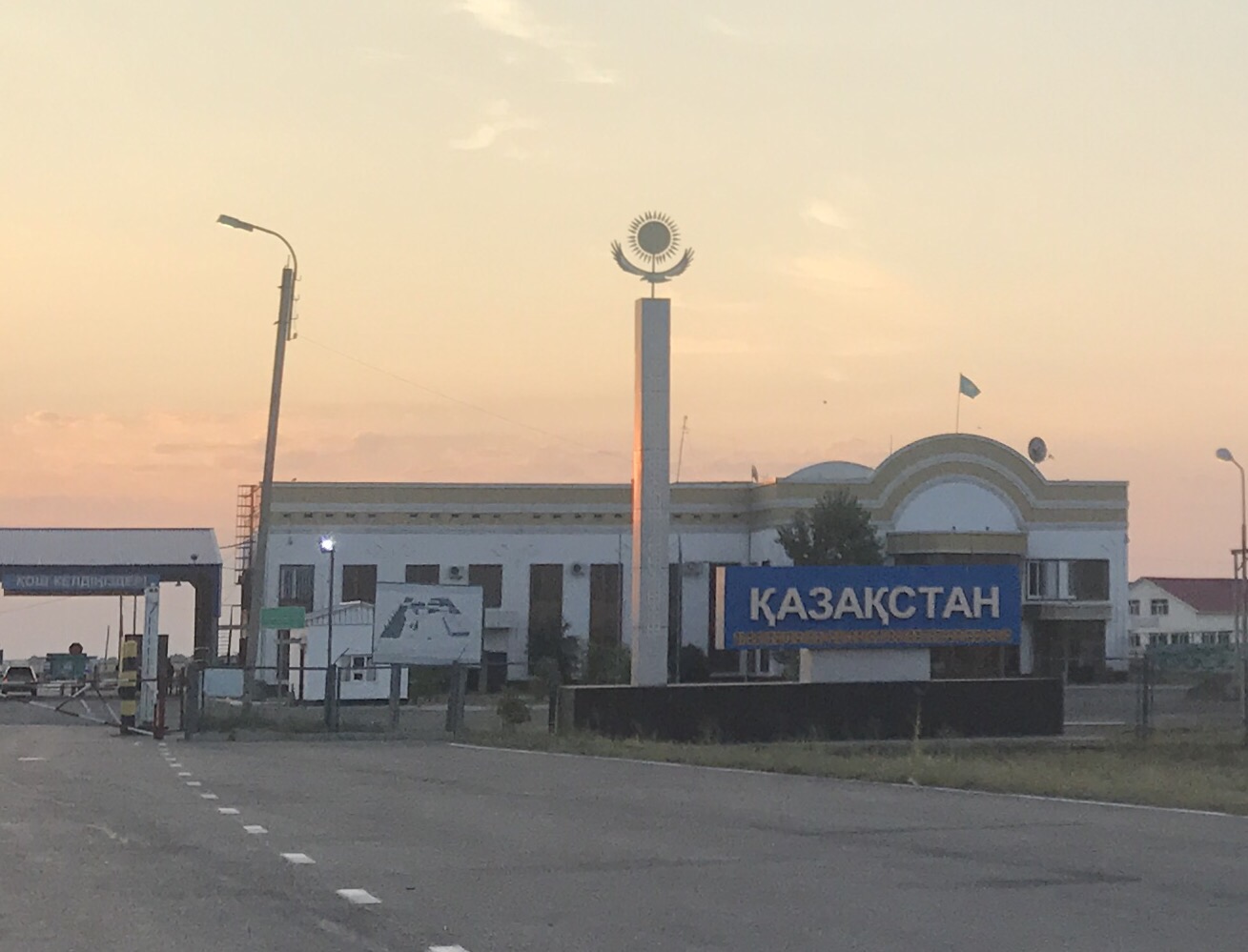 Eventually we were in Kazakhstan. As soon as we drove past the last gate into the country, the car was surrounded by a swarm of old ladies with their faces covered in scarfs talking to us all at the same time. Those were the money changers. We had to change money but the exchange rate they were offering was 35 Kazakh Tenge for one Euro. It took some discussion to make them add another zero (the actual rate at the time of writing was 380 Tenge). Clearly a bad ripoff attempt! So important to have an idea about the actual exchange rate before going into a country.

Now that we had some Tenge in our hands, it was time to purchase our Kazakh car insurance. We had just left Europe, and so our European green card was of no good here. This was a really funny experience. The insurance bureau was a smal shack along the road, with broken windows. Inside was a desk with a laptop and a printer, and two plank beds, one of them occupied by a sleeping Kazakh guy (behind Zsolt on the left in the photo): 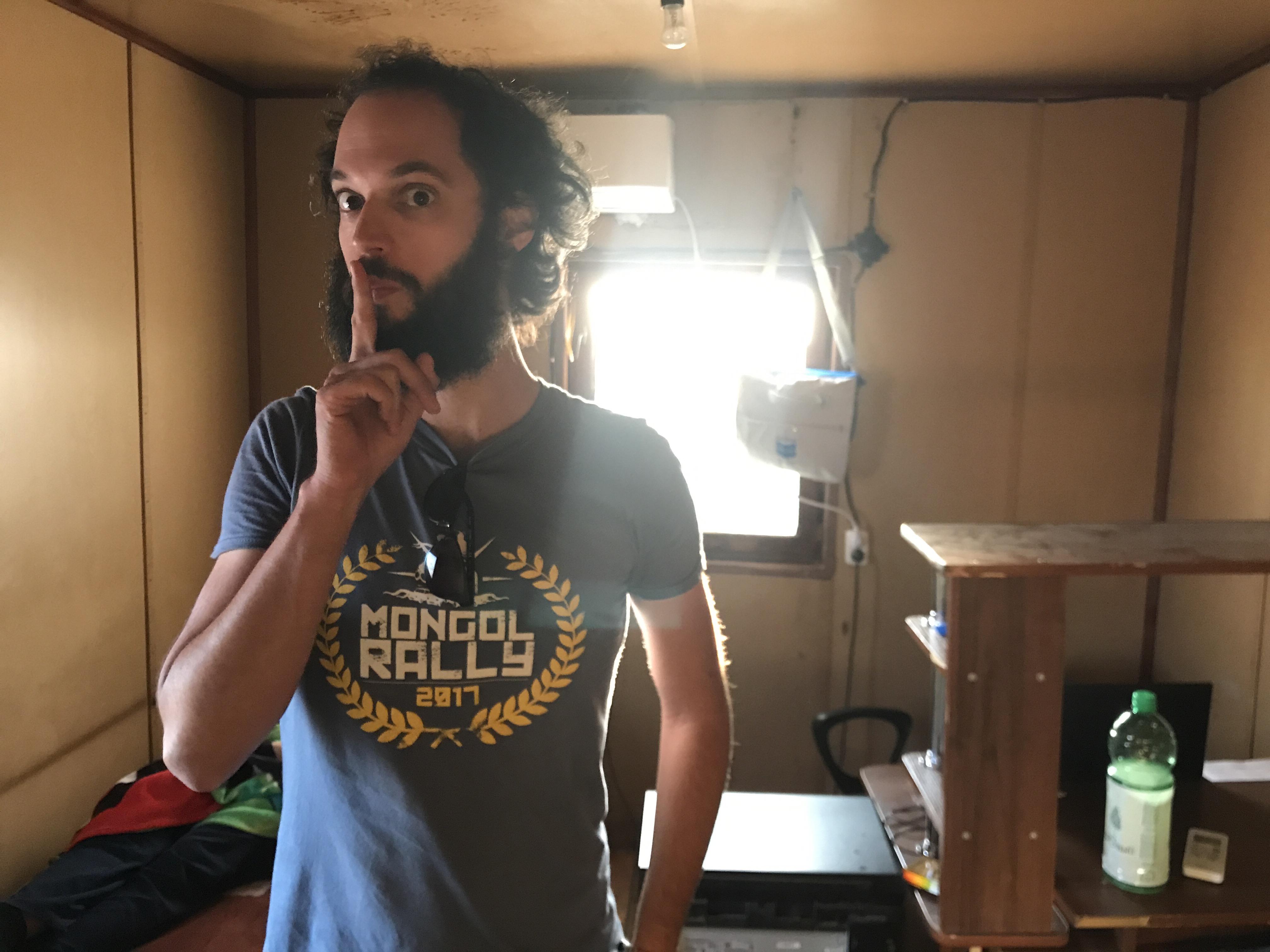 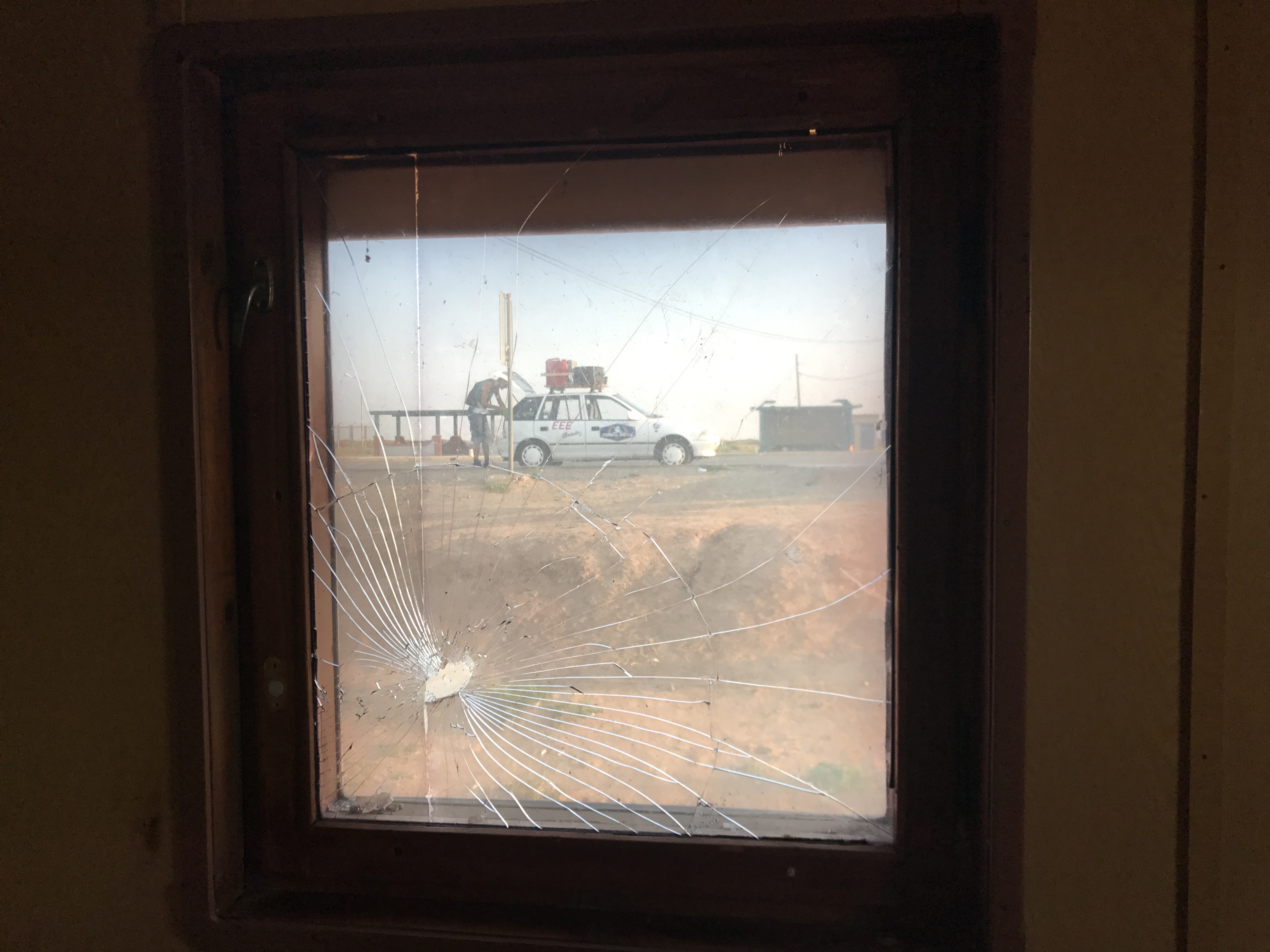 After some negotiation, we managed to buy Kazakh car insurance for 13,000 Tenge that would allow all three of us to drive, and would be valid for 30 days including our planned second entry into Kazakhstan.

And so our Central Asia adventure started. Kazakhstan greeted us with a beautiful green grassy swamp landscape, cows, horses and camels standing around, and lots of cannabis growing along the road. Later, the landscape changed quite quickly into a dried-out, sandy steppe, with no trees as far as the eye can see. 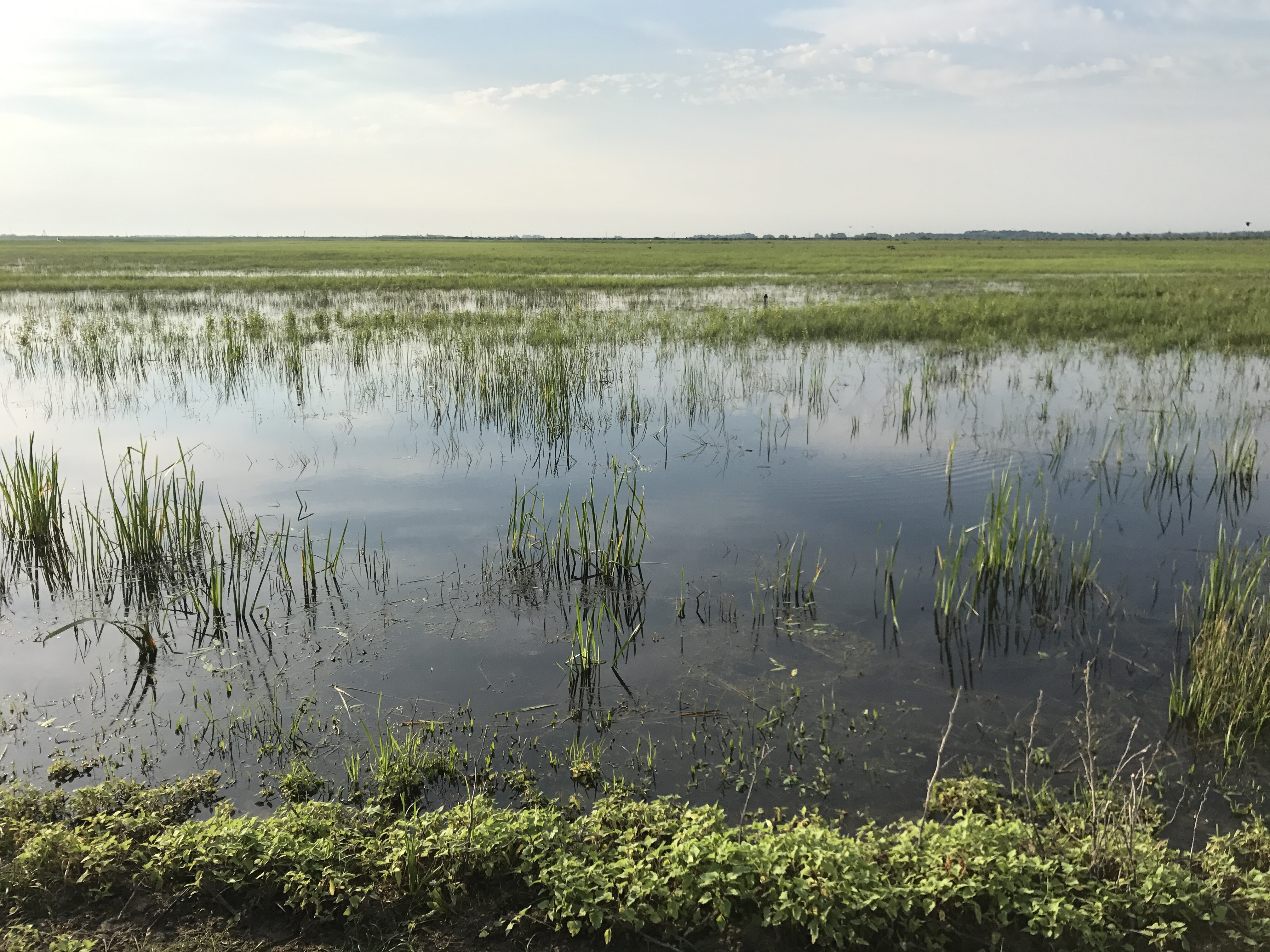 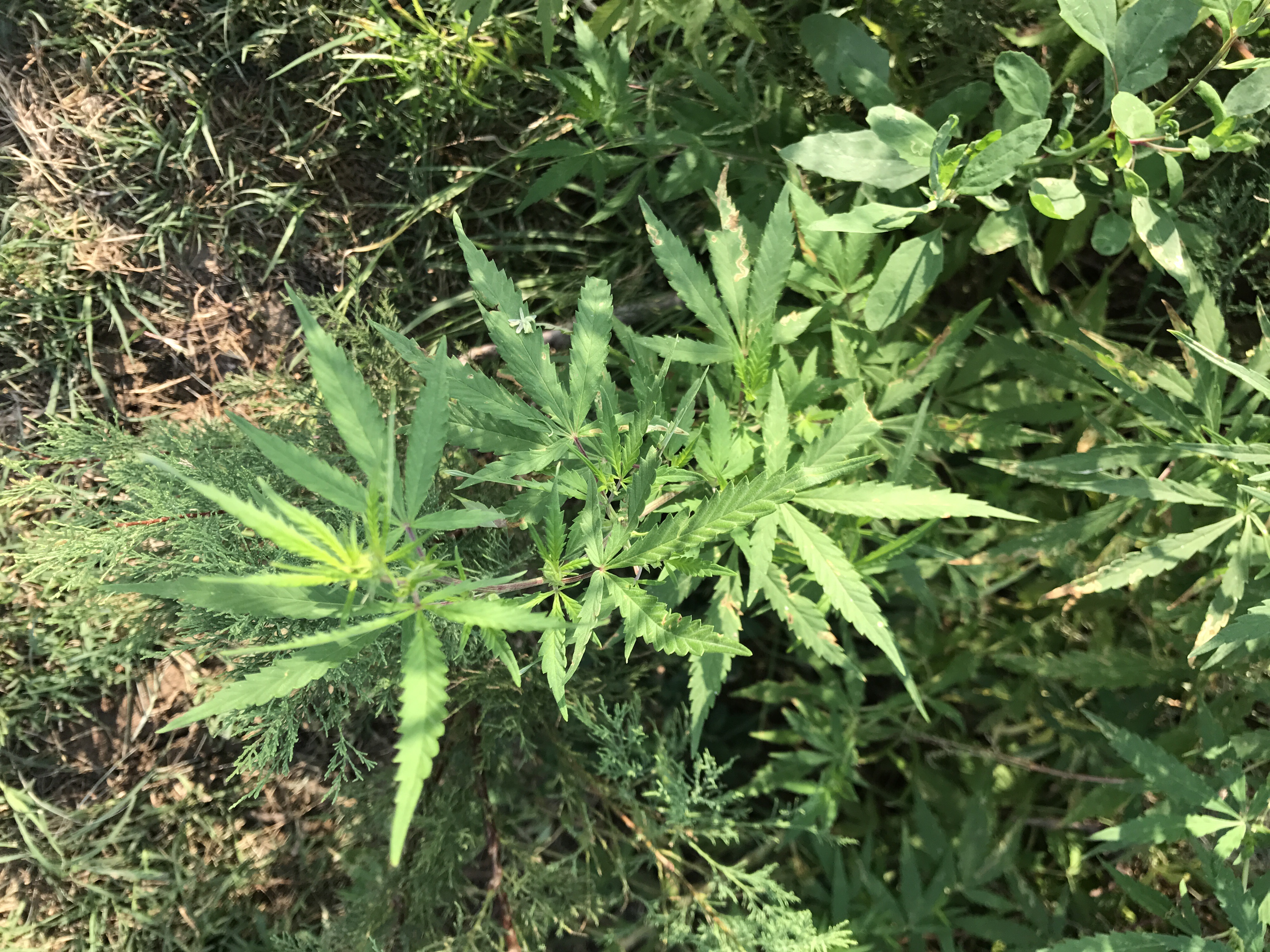 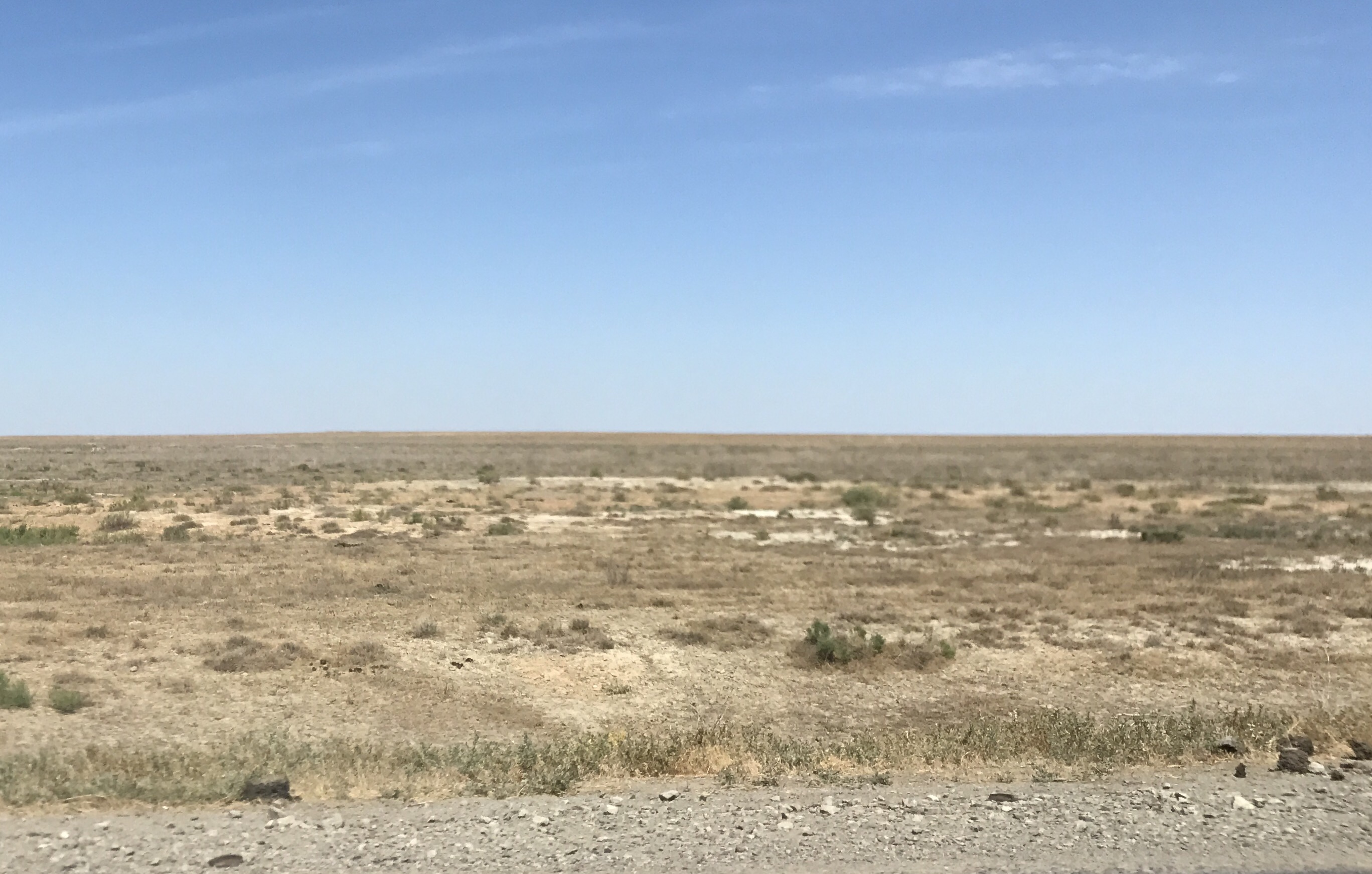 The road was paved, but in appaling condition. The driving style was much more crazy than even in the Ukraine, with cars and trucks overtaking us on both sides,  using the unpaved area around the road and leaving dust trails behind.

After a couple of hours driving through the steppe, we were stopped by two young police officers. They fined us 11,000 Tenge for not having mud flaps at the back of the car, and wanted to take us back to the police station. This was quite obviously a scam, as many of the other cars passing by didn’t have them either. But we didn’t have time to deal with them, as we wanted to get to Atyrau as soon as possible. So we did some “dogovoritsa” to pay the fine on the spot instead, and they let us go, shaking our hands again and said goodbye with the words “Welcome to Kazakhstan!”

At midday, after eight hours of very bumpy driving, we arrived in Atyrau. It turned out to be a city dominated by the oil industry, a weird collection of houses and industrial installations standing around in the steppe, with absolutely nothing interesting to see apart from the world’s longest pedestrian bridge (which we spotted when crossing the Ural river). The plan was to check out the Caspian Sea, which was only about 20km away from Atyrau according to the map. For some reason we had this idea that there would be a nice beach where we could hang out, look at the sea, and indulge in delicious seafood for lunch.

It turned out that we were very wrong. After driving around, getting lost, and asking for directions several times (and getting the answer “there is no sea anywhere here”), it turned out that the Caspian is not accessible here at all, as there is no road leading to the shore, and instead of a beach there is just inaccessible swamp.

Disappointed, we turned back to the city of Atyrau and had lunch at a local restaurant. As it was already 4pm in the afternoon, we decided to stay in the city for tonight. My Russian SIM card stopped working in Kazakhstan, and without roaming we would be cut off from the world from now on when on the road. We found a coffee place with WiFi and searched for a hostel.

The only place we could find was the “Arzu Hostel” which was nearby. It was very cheap so we decided to stay there. It turned out to be a weird place. The dorms were ok, but not nearly as comfortable as in Volgograd. In our room, thete was also a corner with a mat where there would always be one or two Kazakh guys chilling out on the floor. The common area, where guests had tea and breakfast, was also the living room of the family which operated the place. In contrast with all that, there was a massive spa bathroom which even had a solarium and a massage table. Apparently, the place used to be a beauty salon before being turned into a hostel. 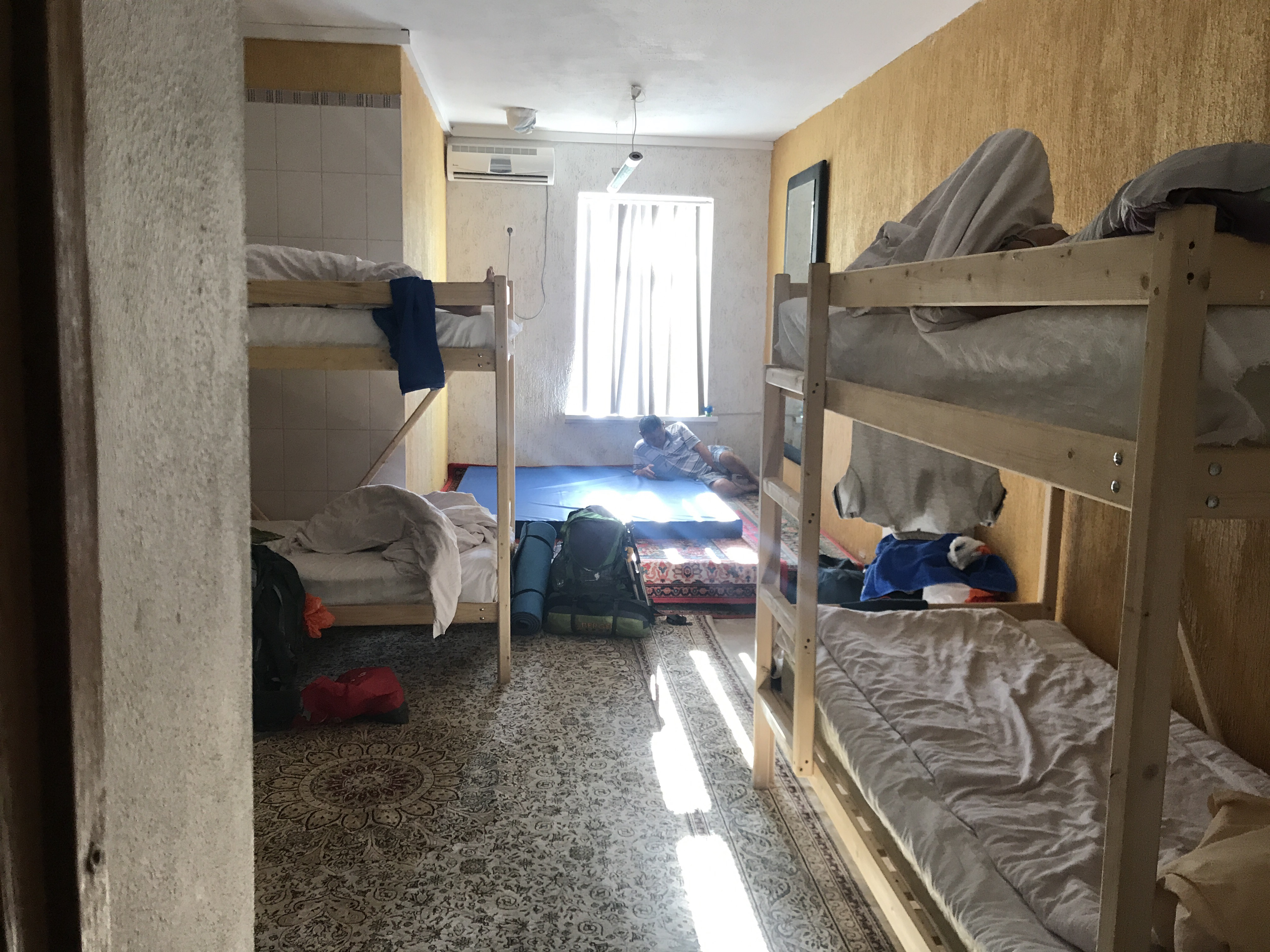 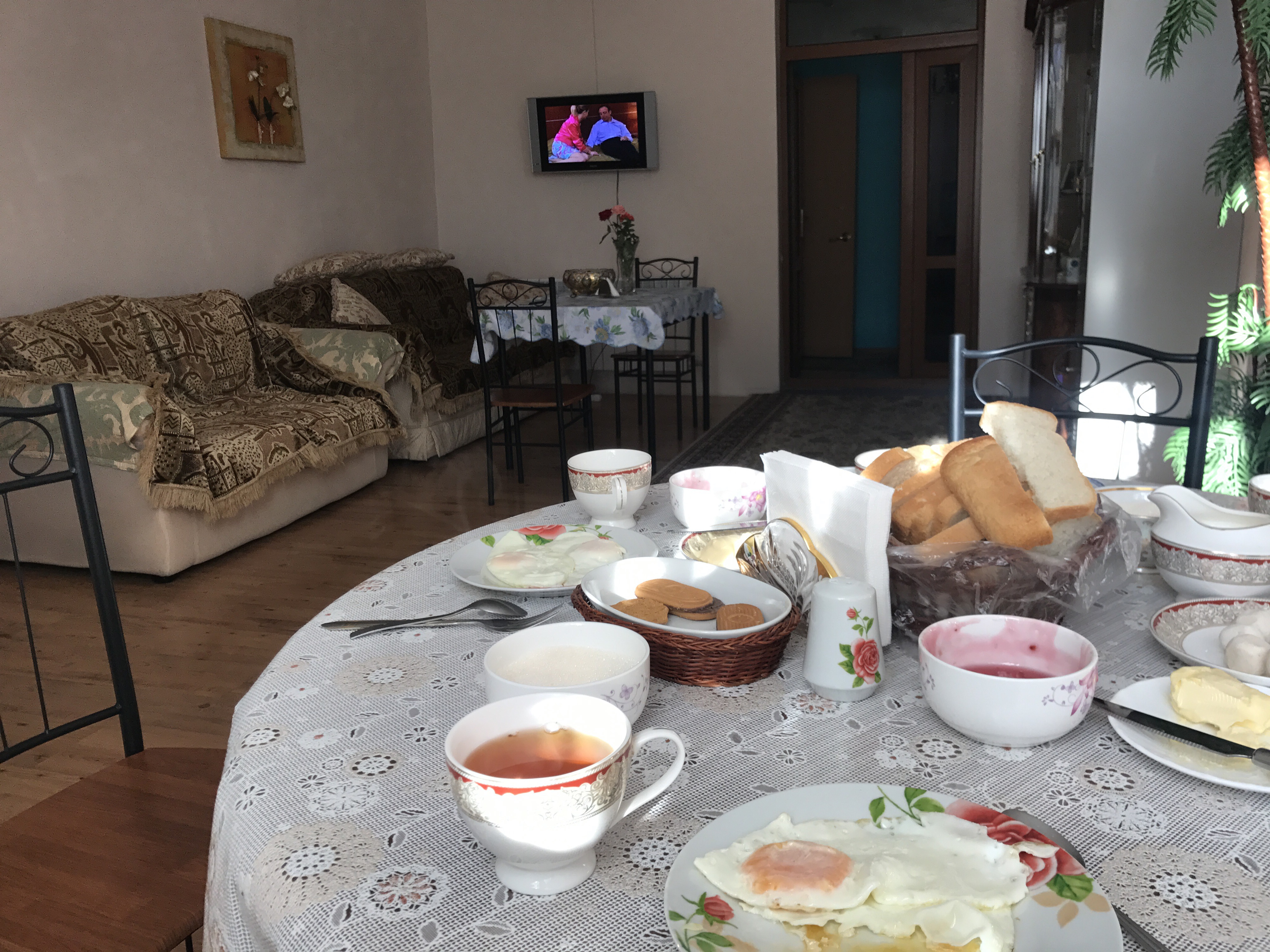 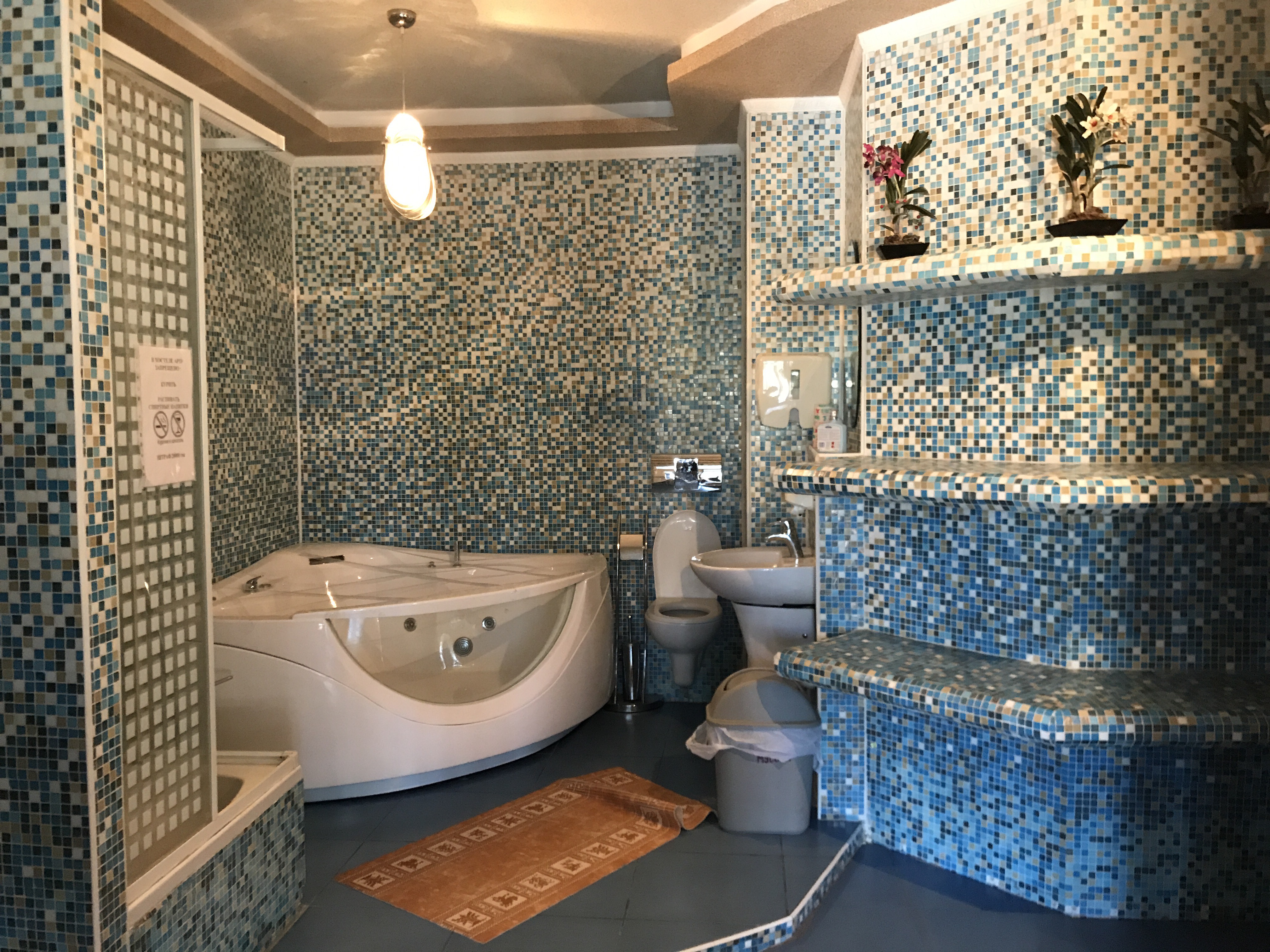 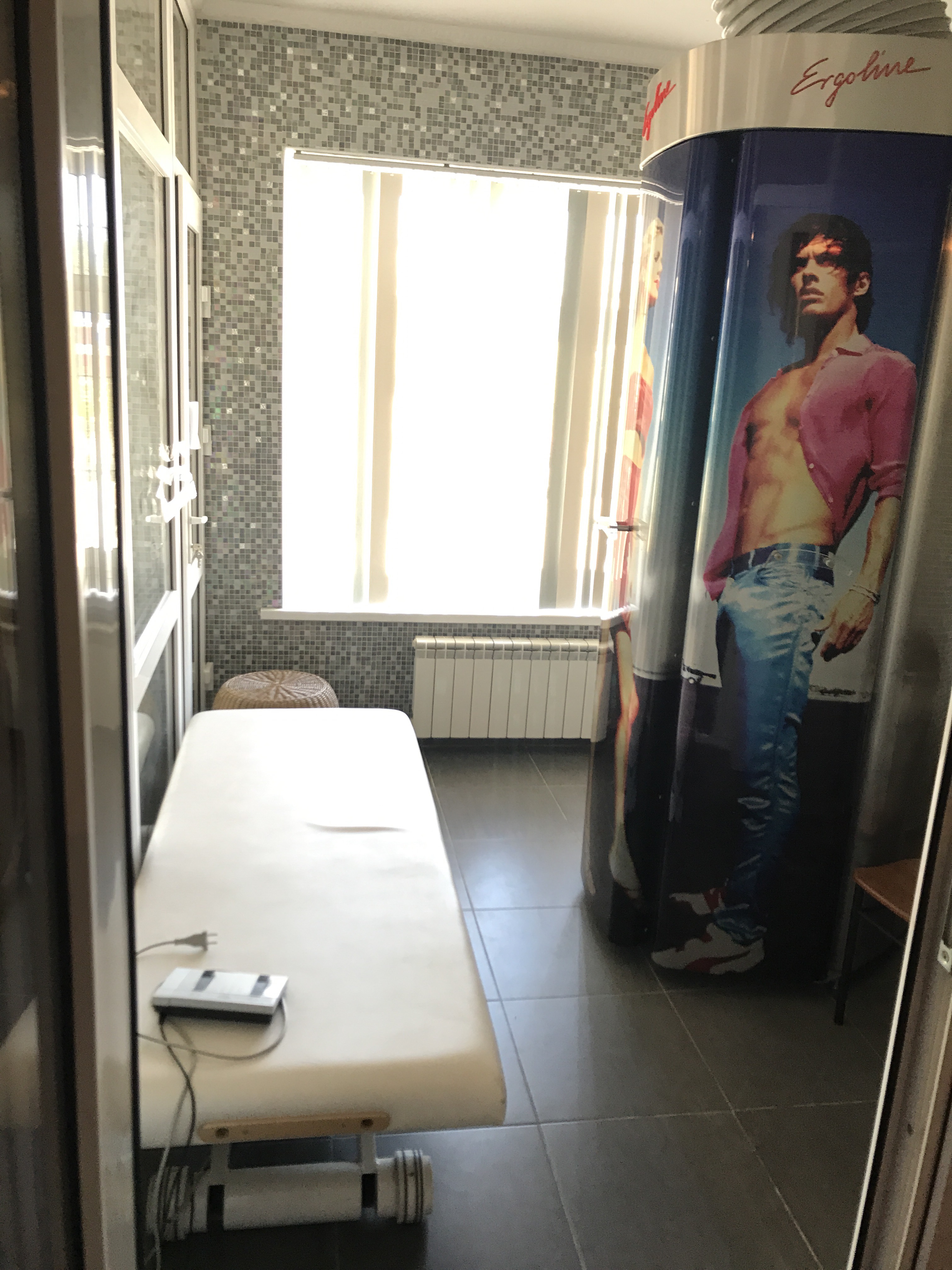 We left our stuff at Hostel Arzu, parked our car in the yard, and hit the town. 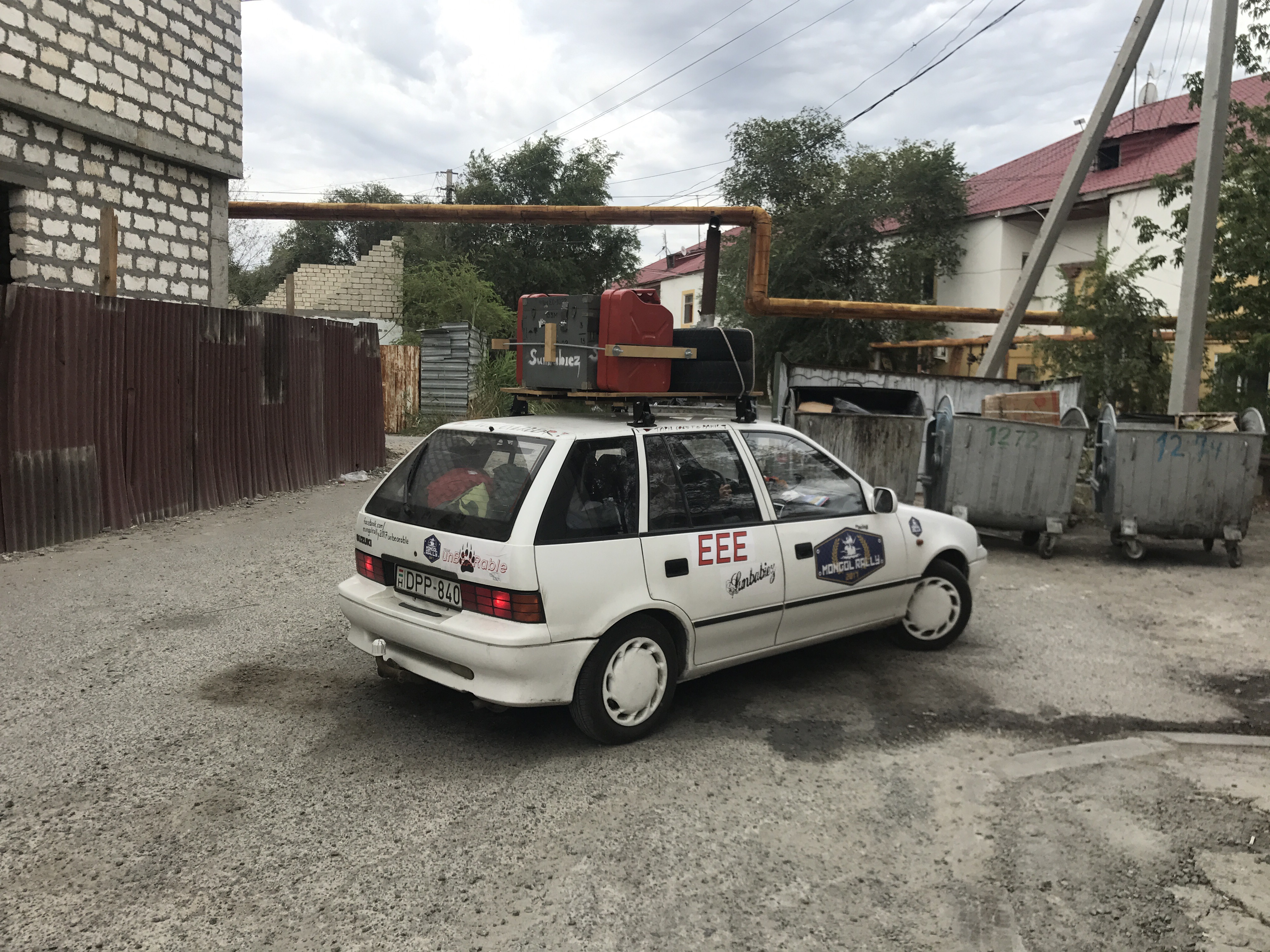 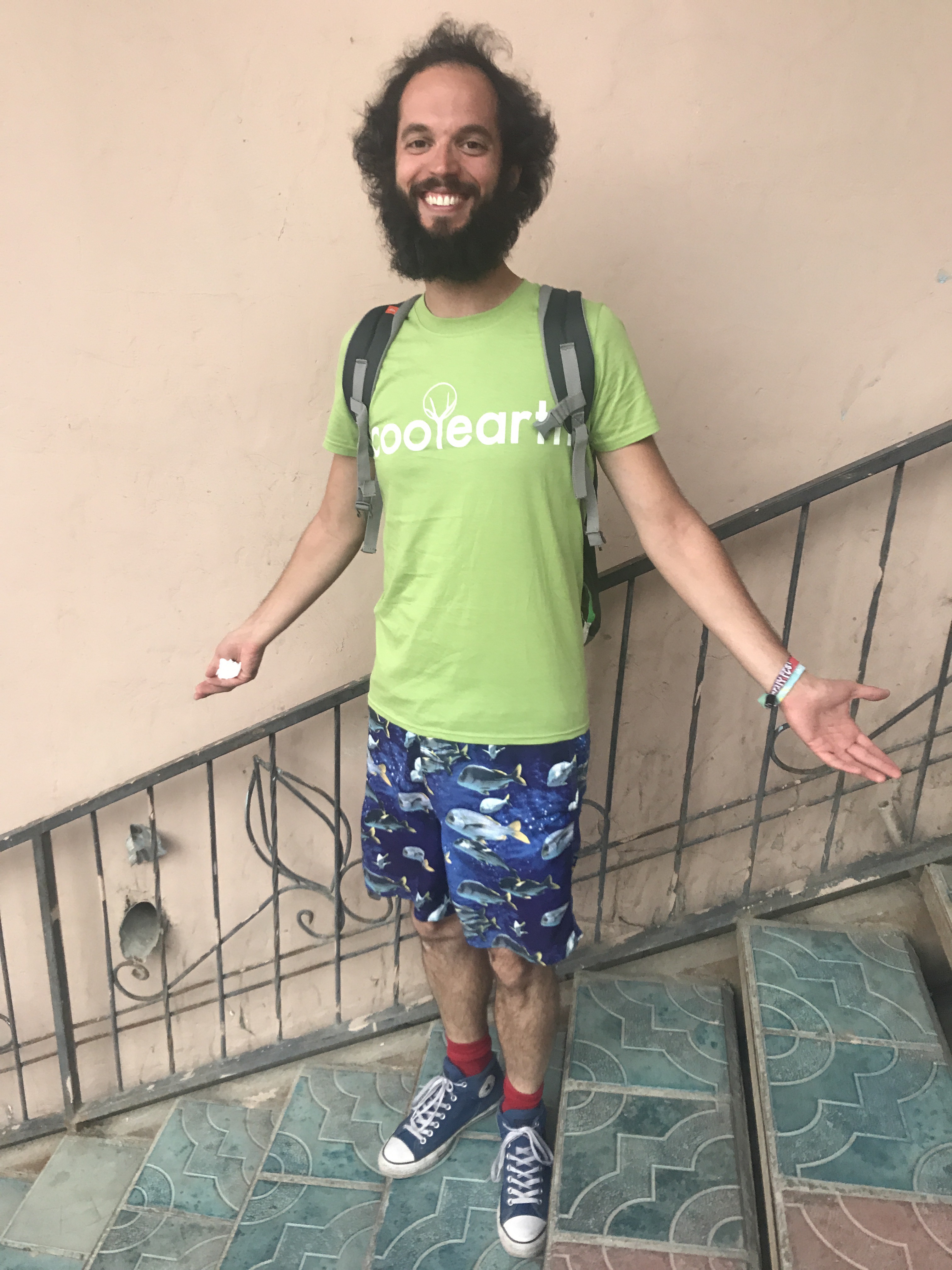 We met a friendly Russian guy named Ivan in the hostel, who was on a backpacking trip to Kazakhstan. He mentioned a traditional Kazakh restaurant he wanted to check out. It sounded interesting, so we decided to all go there. It turned out to be traditional indeed: we were given our own room where we were resting on cushions around a huge table.

Kazakh cuisine turned out to be an acquired taste. We tried Kumys and Beshbarmak. Kumys is alcoholic fermented mare’s milk, served cold. It tastes like vomit, with a slight hint of curd. Beshbarmak is the national dish. It consists of flat, broad pasta with chopped onions and boiled meat. I had the horse meat version. It is actually quite delicious, as long as you don’t try the yellow chunks of fat attached to the meat. They taste fishy and absolutely revolting. 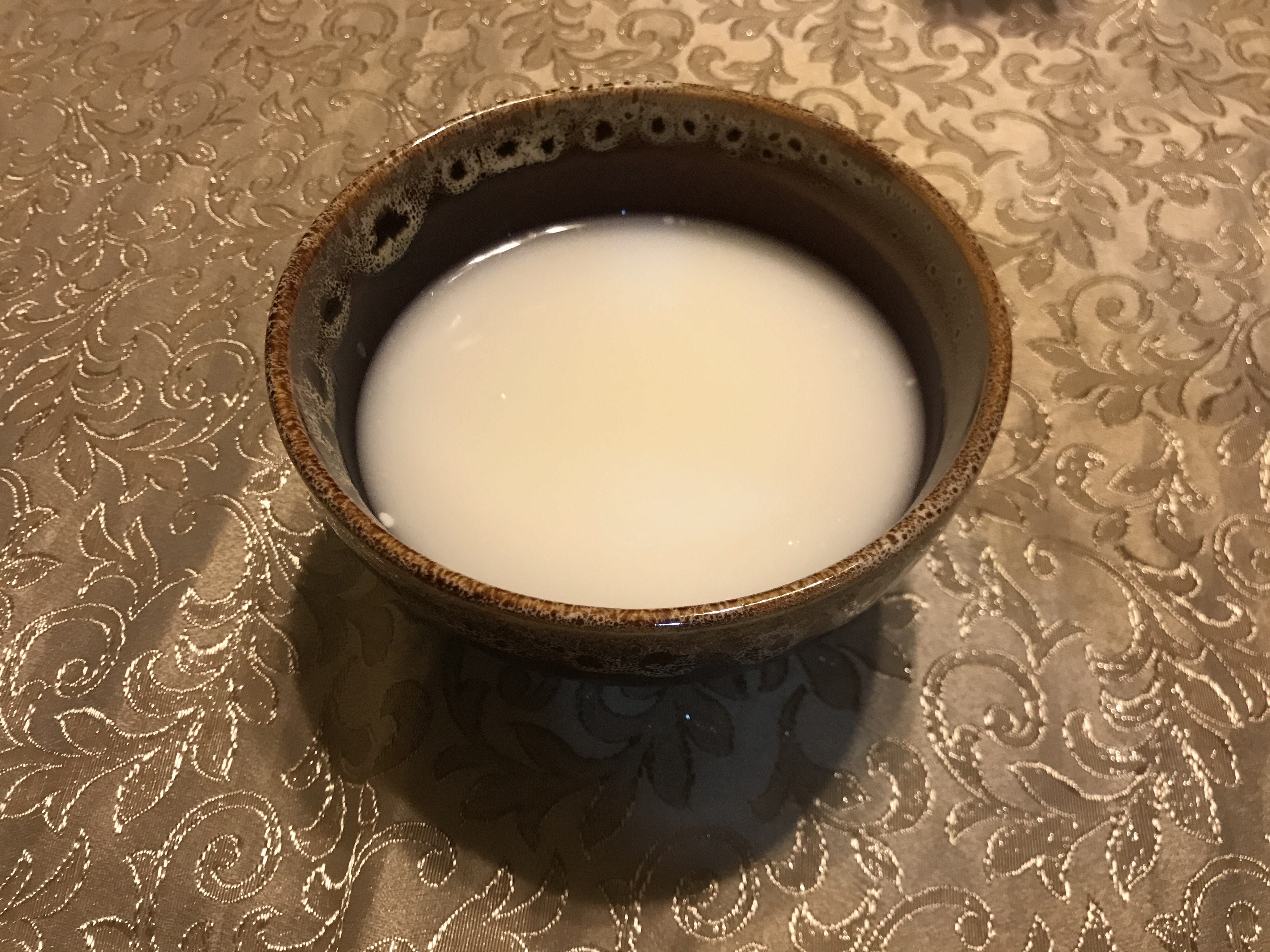 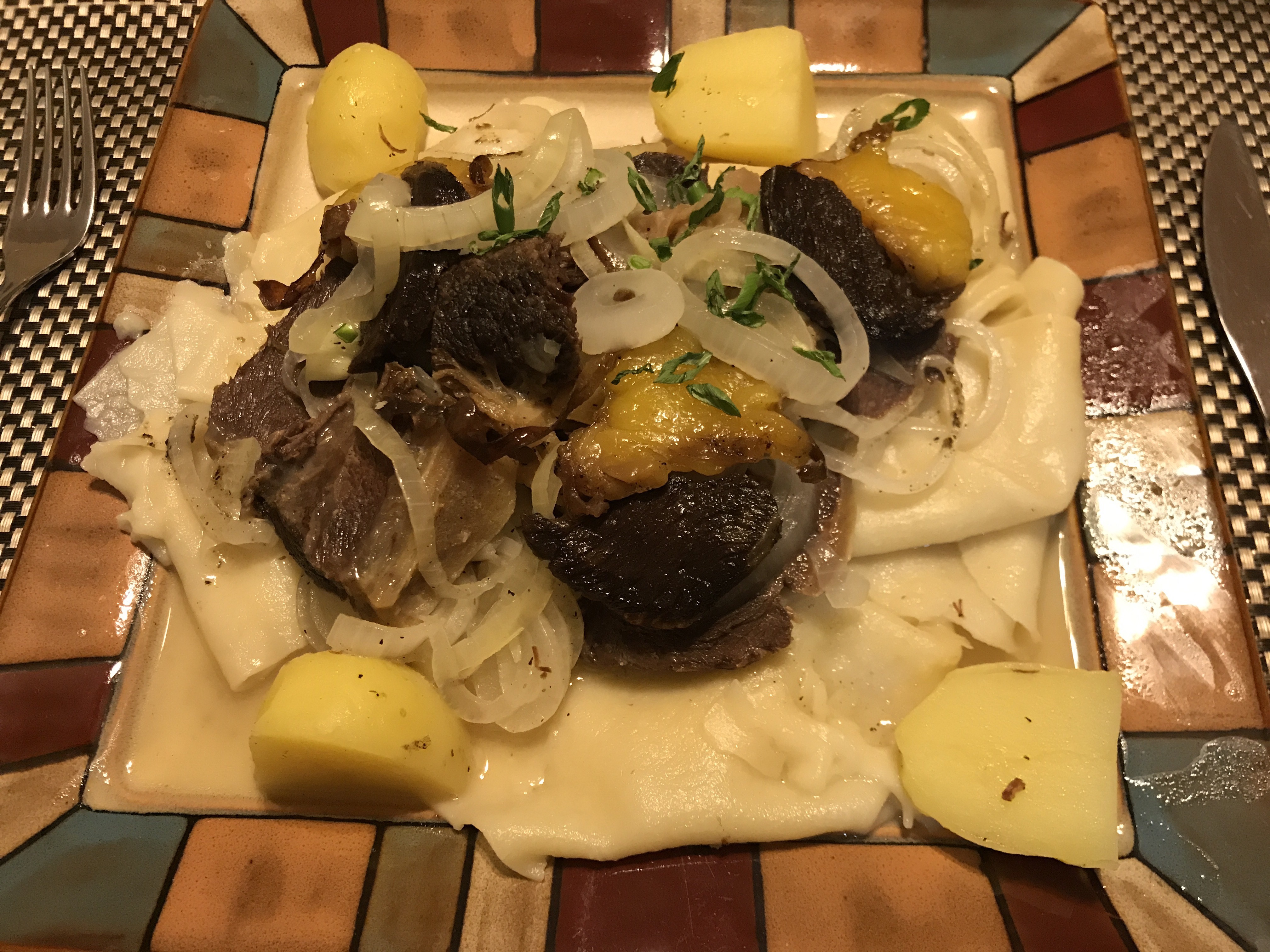 Tired and not in the mood to try more horse-based Kazakh dishes, we went back to the hostel and immediately fell asleep. Tomorrow we will keep moving towards the Uzbek border.

One Reply to “Day 8: Into Kazakhstan”