We got up at around 9am, surprisingly not very hungover. Before we could leave Prague, there were a few tasks we had to do. We had to find a print shop to scan the car authorisation documents, to forward them to the Russian translators that will send the translations to Volgograd where we will hopefully be able to pick them up. We also used the print shop to print some more stickers for the car: 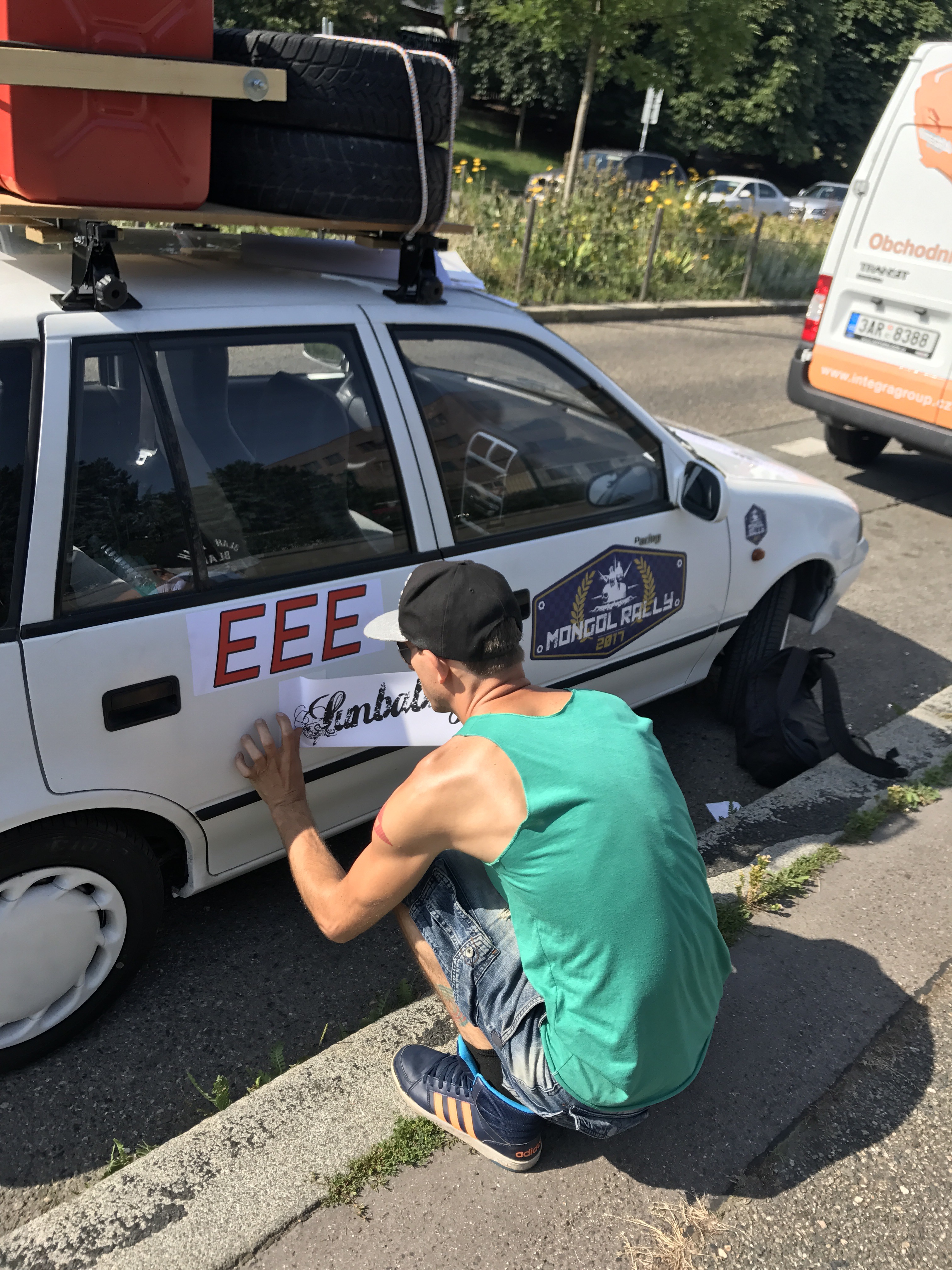 After the print shop we left Prague and there the first car problems began (luckily, relatively minor). First, the left rear window got permanently stuck in a half-opened state. We couldn’t fix it but we managed to modify the door such that the window was stuck in permanently closed state instead. 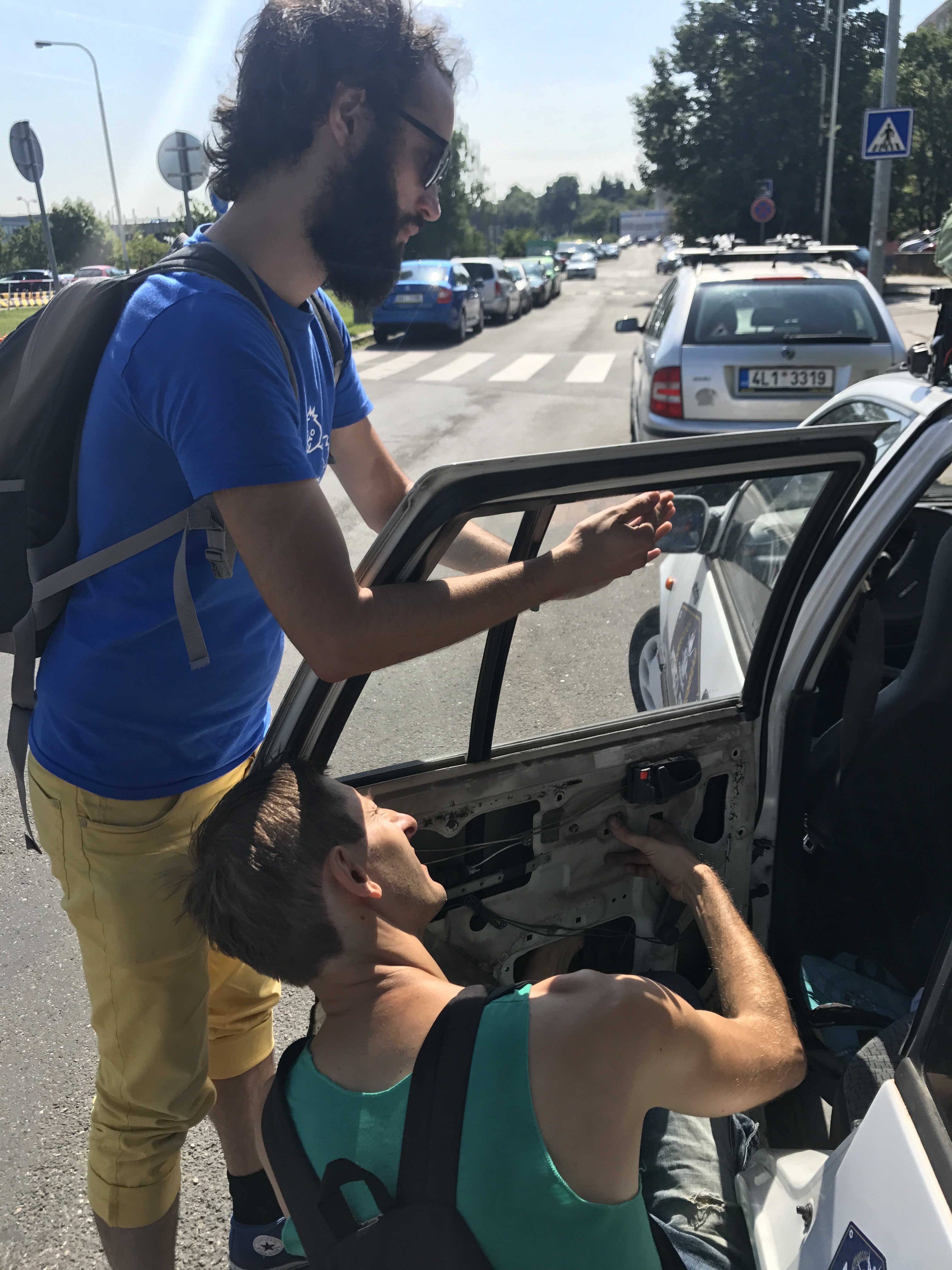 Next, Zsolt filled in a bit more fuel at the gas station than we needed, and it started splashing over and leaking on the highway. We got the extra fuel out by repeatedly jumping up and down on the car while we were stuck in a traffic jam. 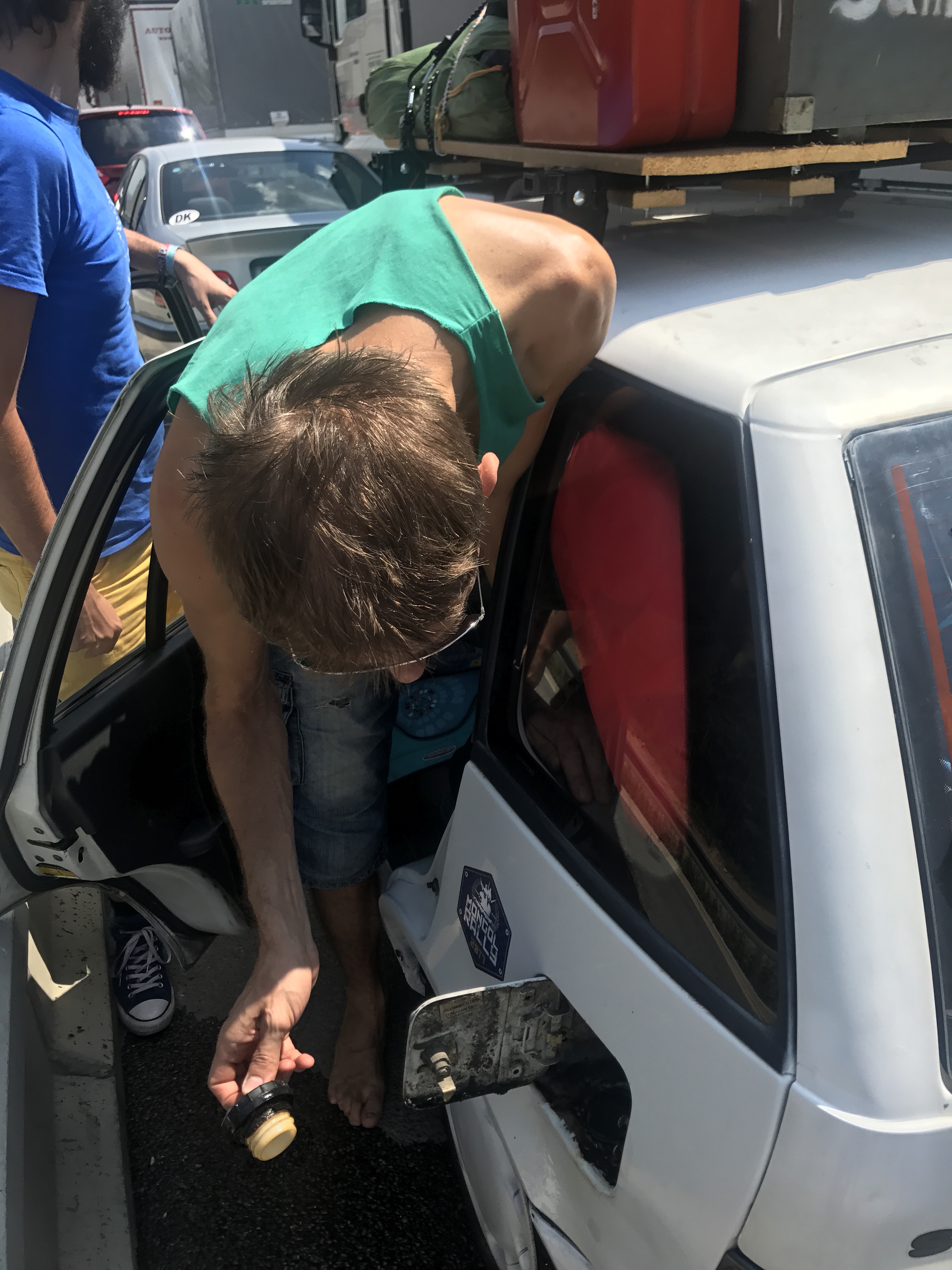 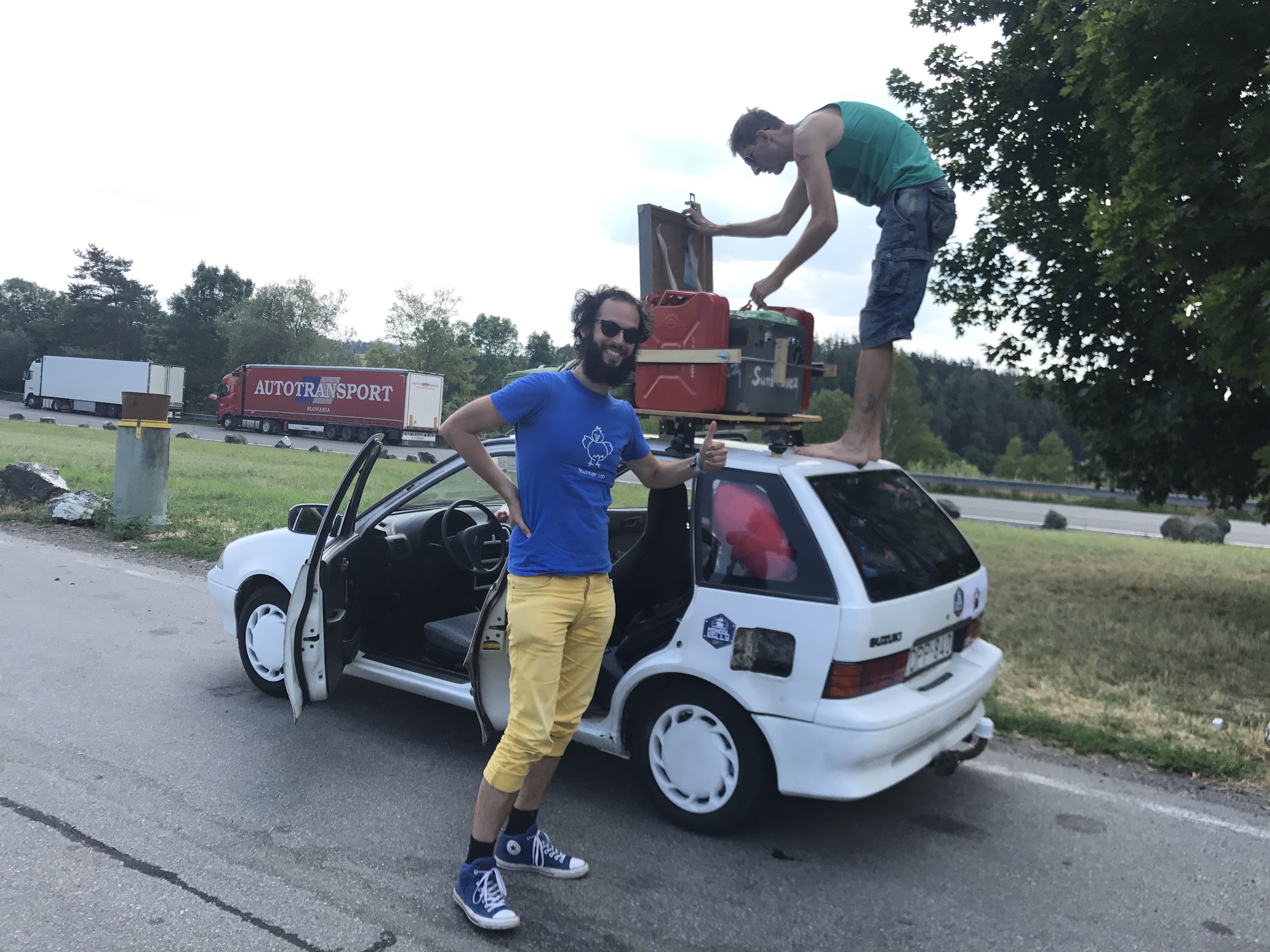 We also met the Bearded Turtles, another Mongol Rally team who was just behind us on the highway. They said they were heading to Budapest and then to Romania to meet the others. So we won’t be driving with them. 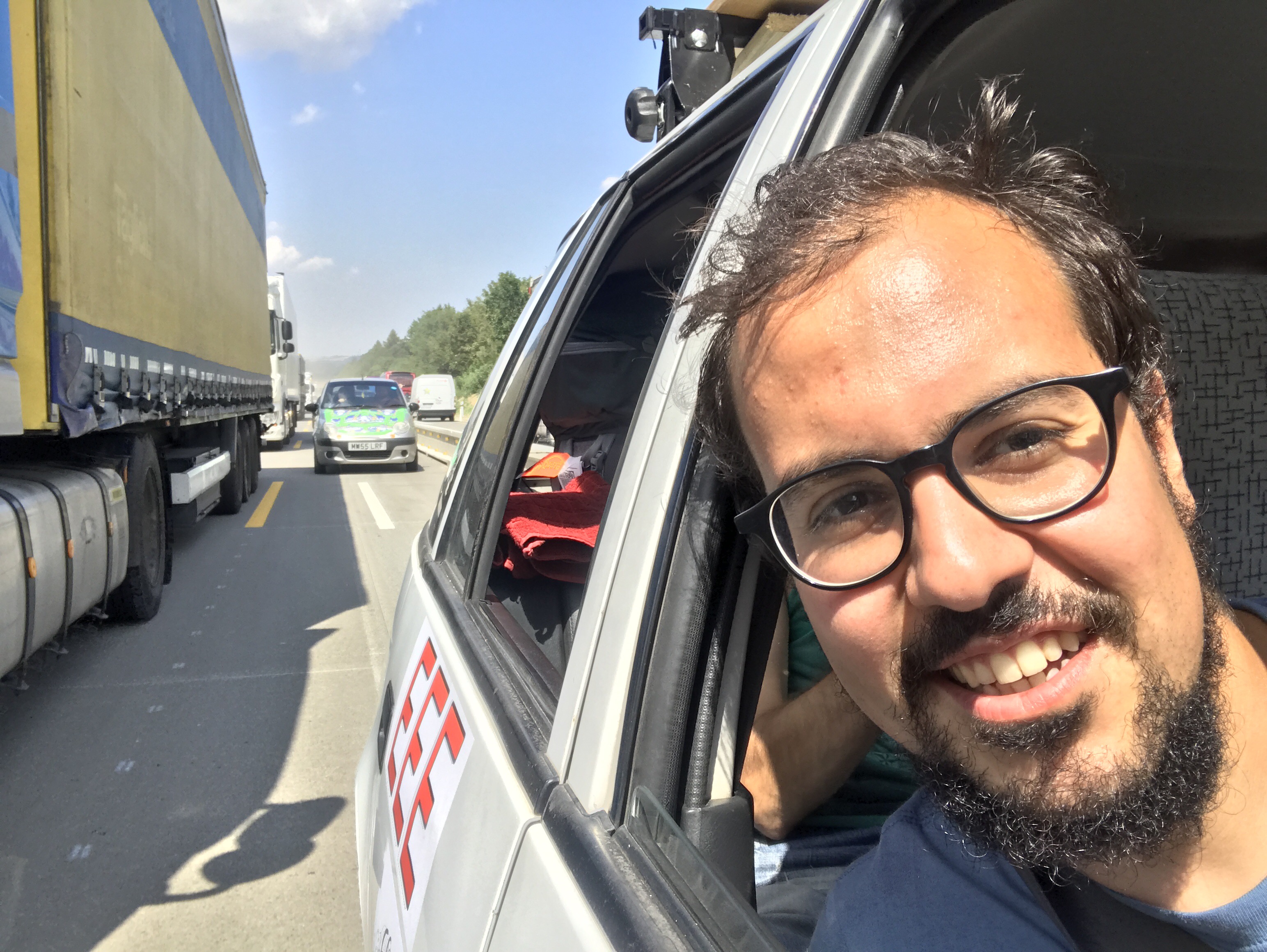 And then there was this long-haired dude running along the cars on the highway and handing out flyers. I think he wanted to invite us to some kind of local party. Instead, Eslie challenged the dude to a race: 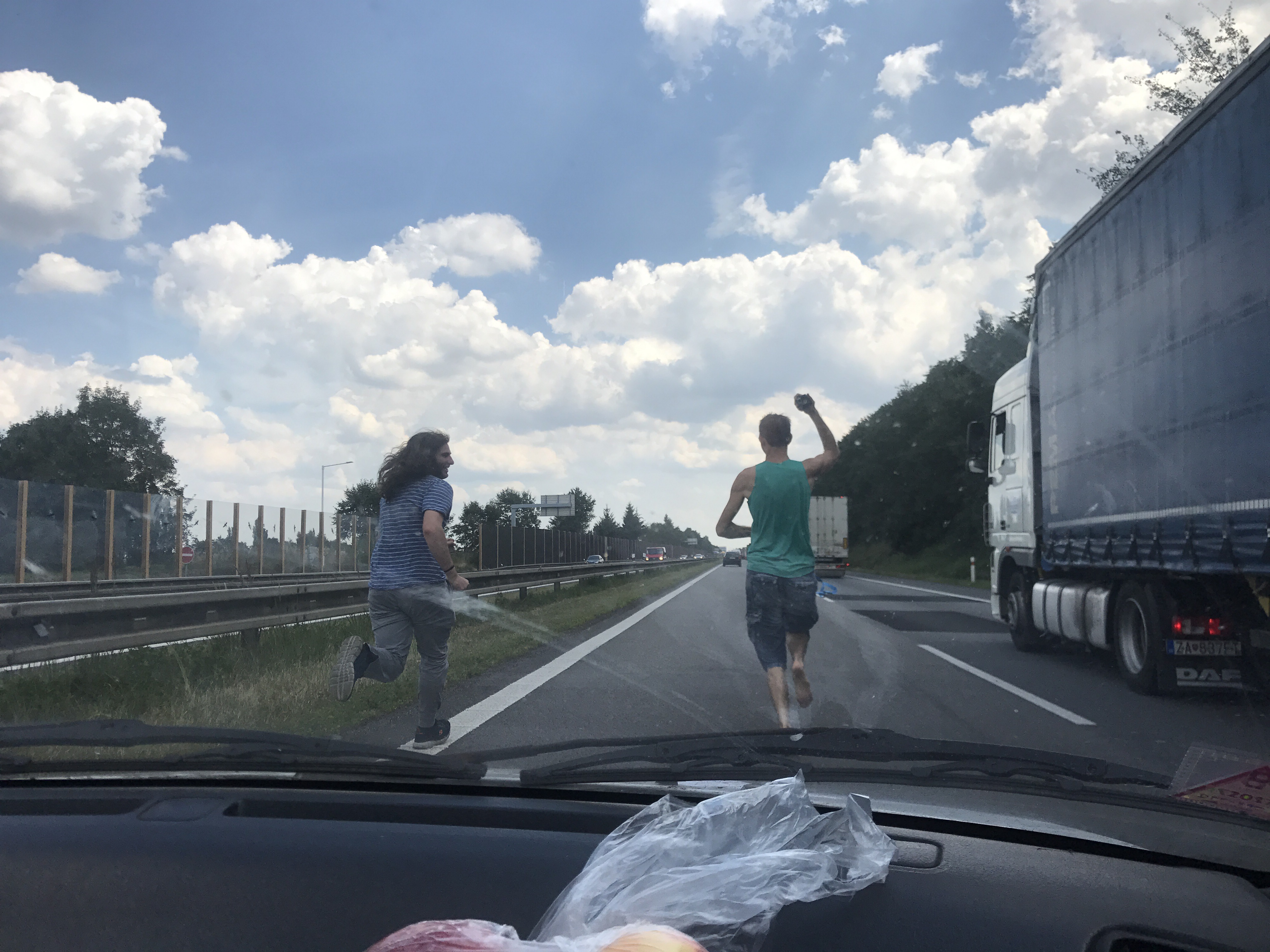 We then drove via Brno, Katowice and Kraków. It was a very smooth ride on the Polish A4 highway, which was in perfect condition. The road toll was 20 Polish Zloty in total. After an unevenful drive across Poland, we arrived at 21:30pm at the Ukrainian border in Korczowa.

Here is our beauty, standing in the queue: 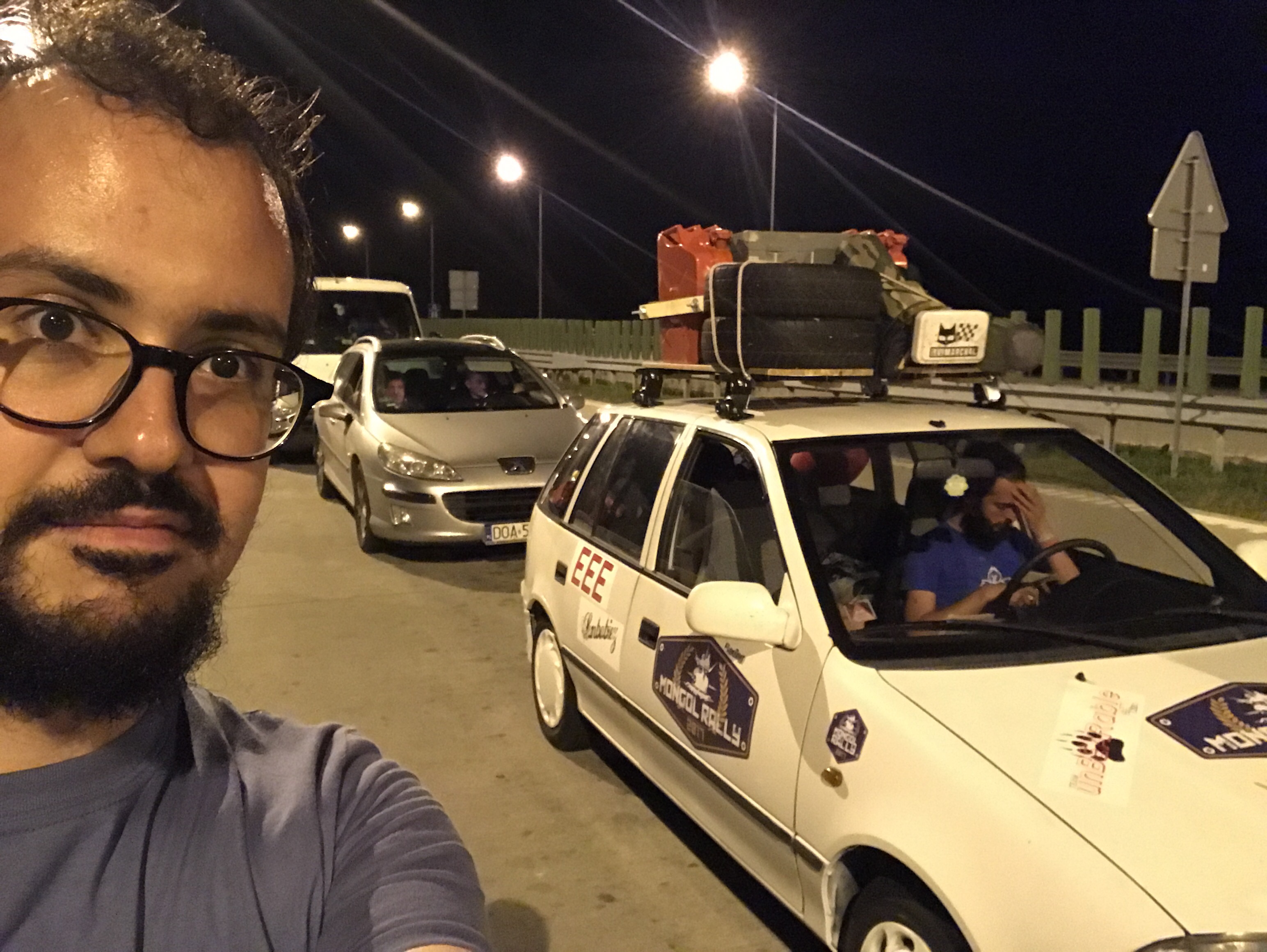 The queue to the Polish side of the border check was 2.5 hours of mostly hanging around, and moving the car forwards by a few metres every 10 minutes or so. On the Polish side there were no shops or facilities at all, apart from this  toilet: 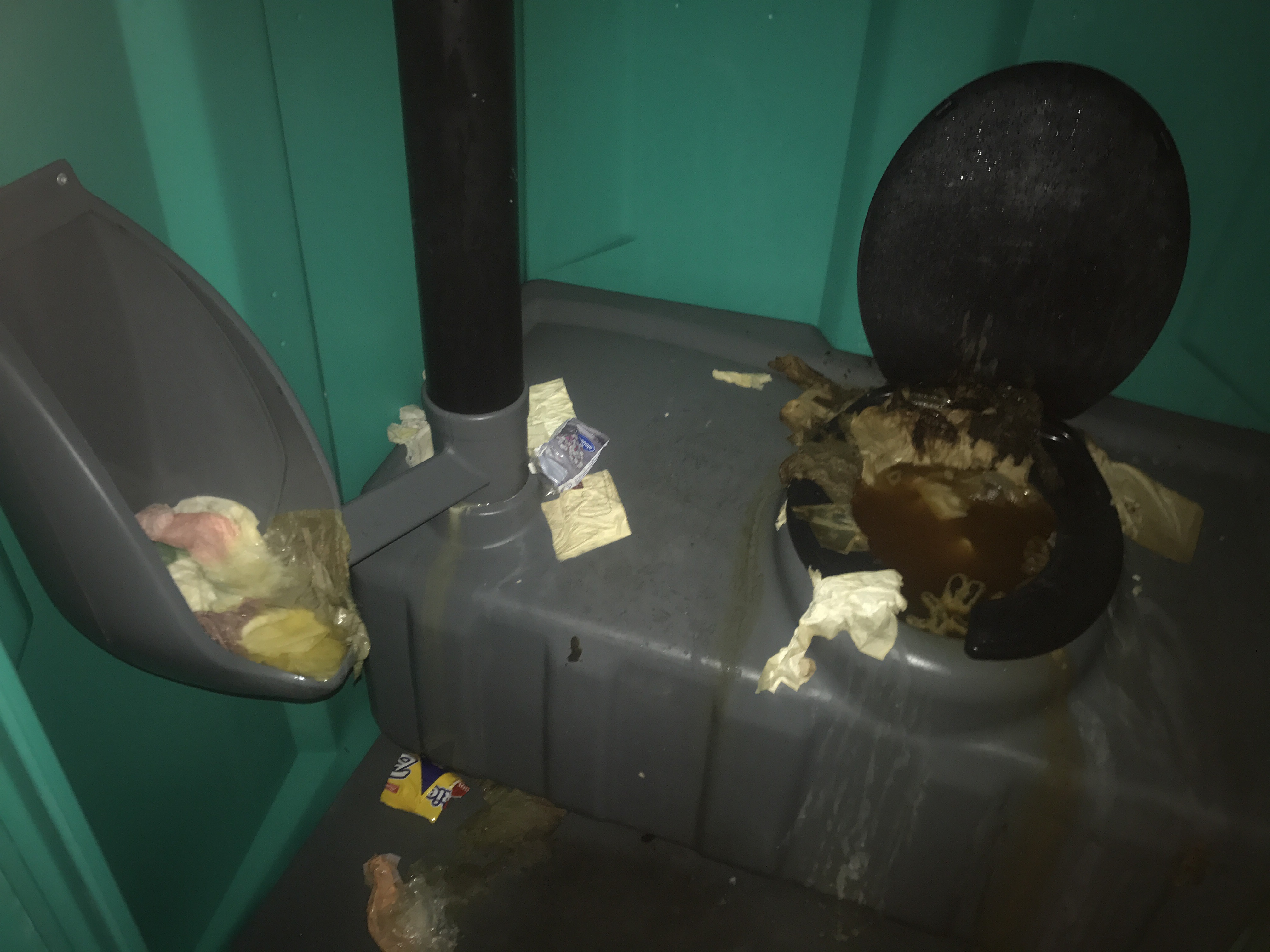 We were very hungry and running out of fuel, so this was our first lesson: stock up on fuel and on canned food before the next border!

Around midnight we approached the Polish side of the border controls. They checked our passports and car papers and we moved forwards. Then we spent another 1.5 hours waiting in the queue for the Ukrainian immigration. Ukraine was now only a stone throw away: 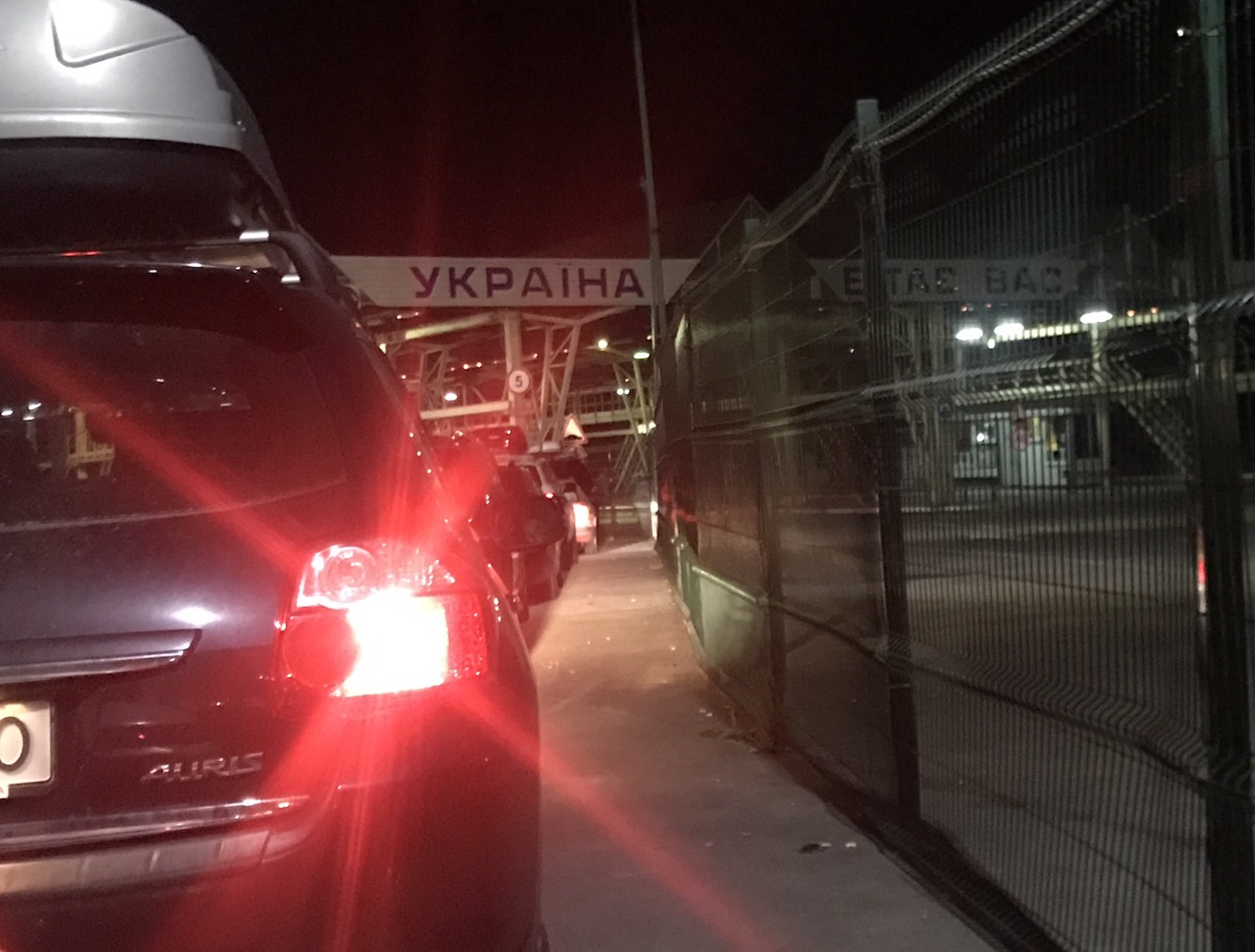 Finally we approached the immigration control. It was also very easy: they asked where we’re going, we said “Mongolia”, they didn’t seem to care, stamped our passports, looked at the car papers and the green insurance card, and let us in without any further questions. (Another team reported yesterday that they got into trouble for not having the green card and had to bribe their way through, but we were better prepared.)

Around 1:40am, after more than four hours in total waiting at the border, we were finally in the Ukraine!

It was way too late to look for accomodation in Lviv (next major city after the border). So we decided to just drive through the night, taking turns driving and sleeping, so we can get to Kiev as early as possible. We had an appartment booked in Kiev for the two following nights (£40 for two nights and three people!), and the email said we could pick up the keys starting from 10am, so we figured we would probably arrive in Kiev just in time to pick up the keys and rest at the apartment.

We’re on our way to Kiev now. Let’s see how Ukraine will treat us!

If you like this blog, please consider donating for our charity campaign for Cool Earth. Click here!

We already collected 56% of the fundraising goal at the time of writing. This is phenomenal! Huge thanks to everyone who donated already. We must reach the 100% before we hit the Mongol Rally finish line, so we count on you people!