The last 13km of “road” before the Katerinovka-Krupets border crossing from Ukraine into Russia was easily the worst road so far for us, full of potholes and only navigable at around 40km/h in the dark. The road was so crap that the car bottomed out several times. After the third time or so, this piece of metal fell off: 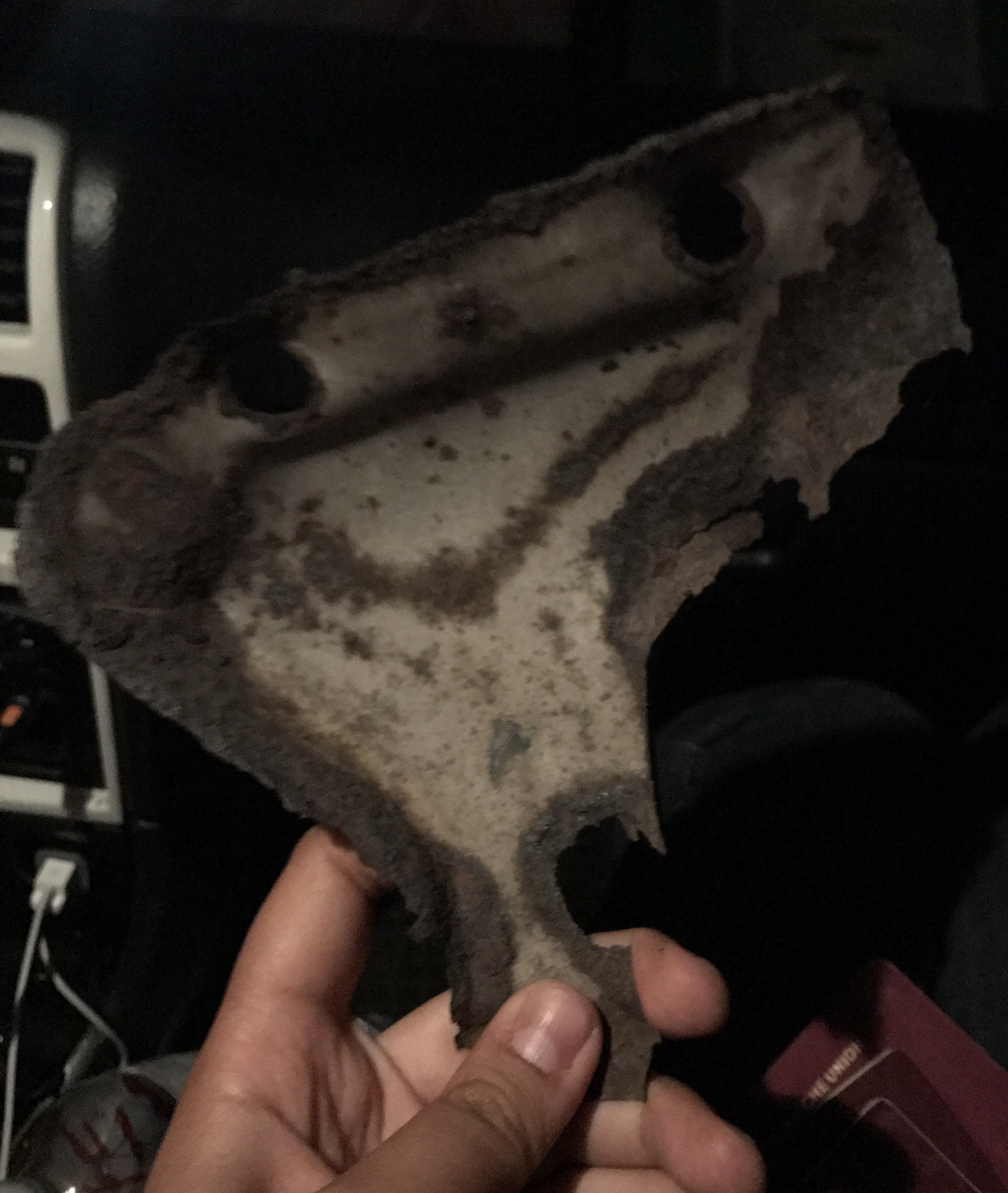 We couldn’t figure out where it came from exactly but decided to keep it just in case.

The border crossing was very remote and we didn’t see any other cars on this road, just a couple of lorries coming the other way.

When we arrived at the Ukrainian side of the border, there were only a dozen of lorries and a couple of cars waiting. We were greeted by really intimidating military people with machine guns. They made weird jokes and suggested things like that we were hackers and only have met each other yesterday. They tried to extort bribe money and scared the shit out of us. There were no official-looking border buildings at all, just a couple of weird-looking small barracks with those machine gun people running around. There was no real queue, just a couple of cars standing around. One couple told us that they were refused because they didn’t like their European licence plates — they accused them of trying to illegally sell the car in Russia and would only let them through if they paid a substantial bribe.

Finally, they came to us. It was very dark and we had to wait outside in the rain while they searched our whole car. I believe they were mostly looking for drugs. They left our bags alone, but thoroughly searched the car’s floor, seats, and glove compartment, turning every little coin and other item in there, and thoroughly probed our little teddy bear Vladimir. During this procedure they kept jokingly accusing us of various crimes and waving around with their guns.

The whole experience was very creepy, but they let us through eventually. We drove past the Ukrainian gate and into neutral territory. In front of us we could see the sign welcoming us into Russia: 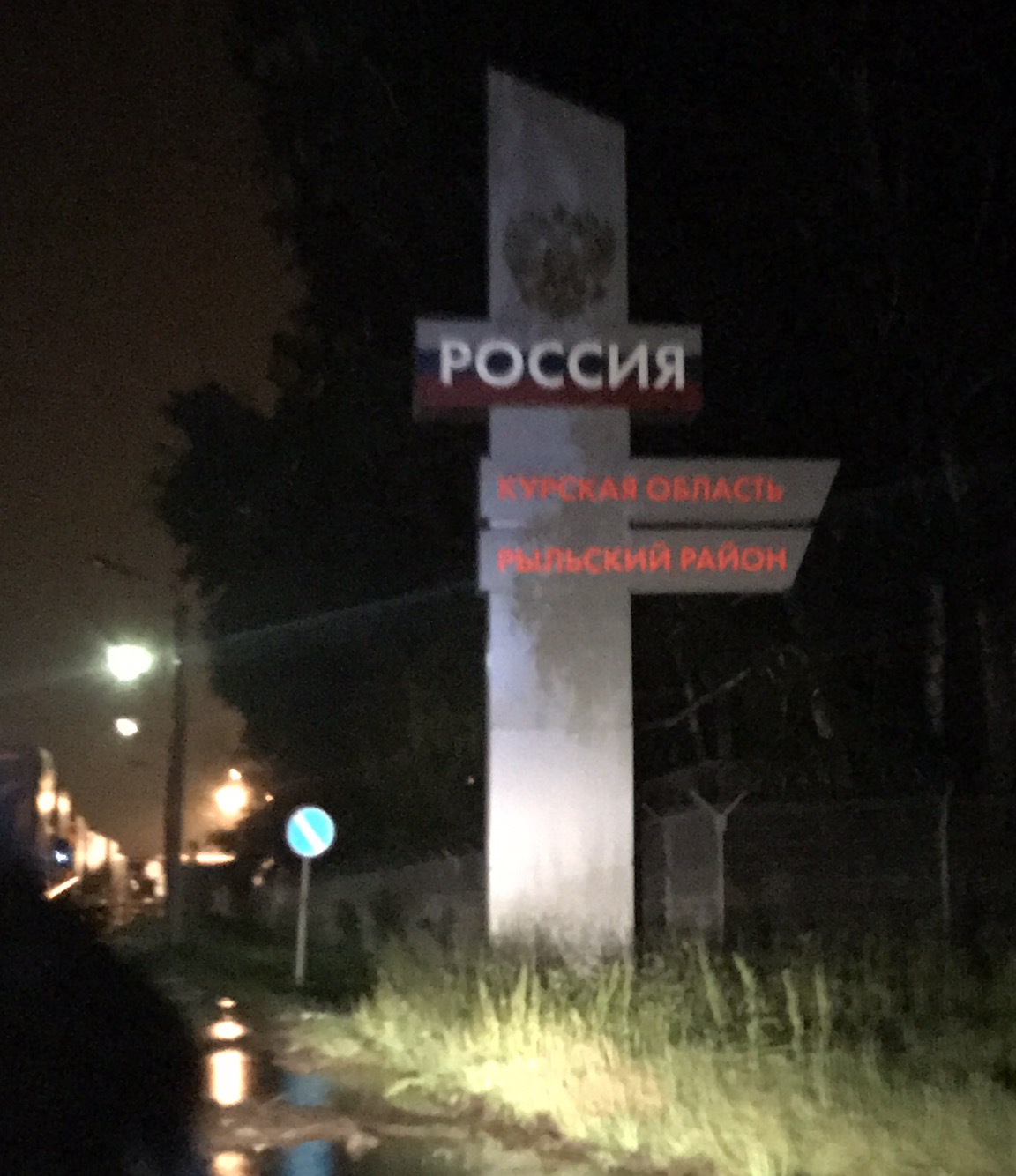 It was 23:35. We parked the car just before the sign and waited out the 25 minutes until Zsolt’s Russian visa became valid. Then, we drove on to the Russian border check.

On the Russian side, everything was much more friendly and civilised. There were proper gates and buildings, there were lights and a roof. The border guards asked us in much detail about the trip. They immediately spotted our dodgy visa situation (travelling on “business visas”) but then asked us a lot about the Rally, the Adventurists, and even this blog. They were very friendly and genuinely interested, and liked what they heard. So they decided to stamp us into Russia (the border guy who questioned us literally said to the woman carrying out the passport check: “let these guys in”). Phew! I have never been so happy about a single passport stamp. 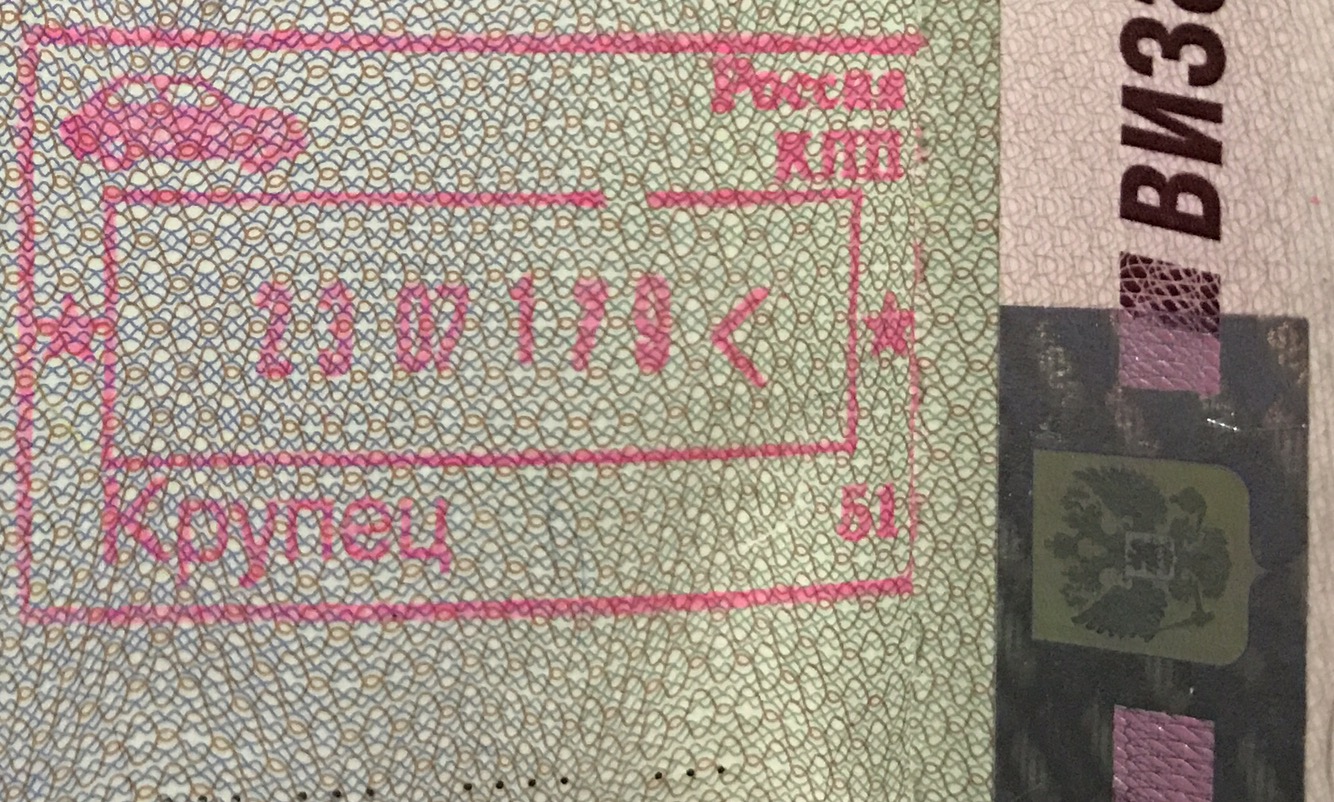 After the passport check came the customs formalities and the temporary import procedure for the car. Luckily we didn’t have to also purchase car insurance as our green card was good for Russia. All the customs and car import formalities took 2.5 hours. It was a complicated process, no one spoke any English, and the customs form was completely in Russian and had to be filled out in a very specific and non-intuitive way. And of course we made some mistakes and then had to fill out everything again. I can’t even begin to imagine how a rally team where no one understands any Russian would possibly get through this.

Overall the crossing took about 4 hours. But we made it!! We were finally in Russia. It was around 3am. We decided to again drive through the night, like a few days before, to get to Volgograd, the next stop on our route, as soon as possible.

The drive was largely uneventful. On the road we had some very tasty pork-neck shashlyk for breakfast, and Eslie made another bear-themed masterpiece drawing on the bonnet. 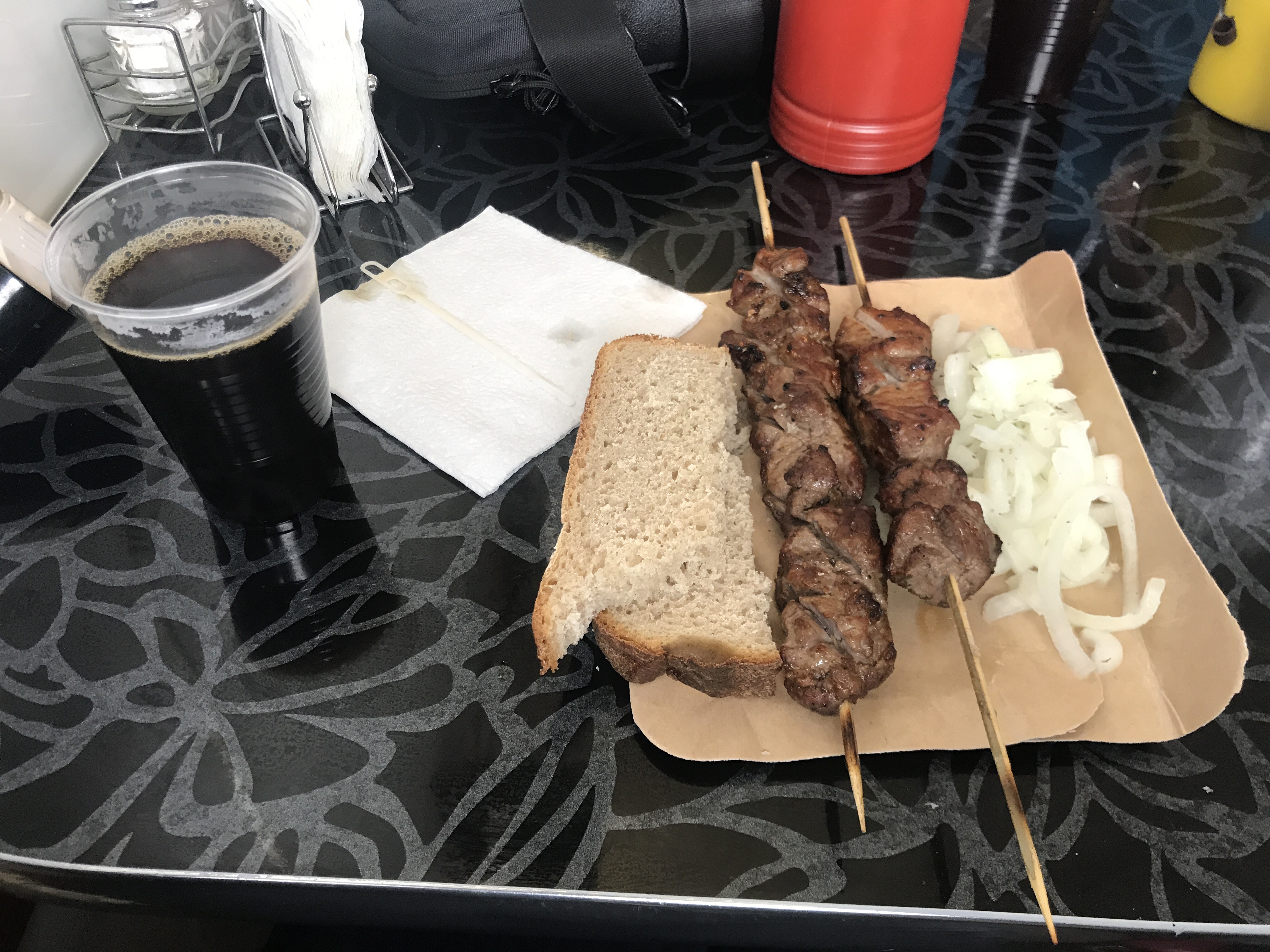 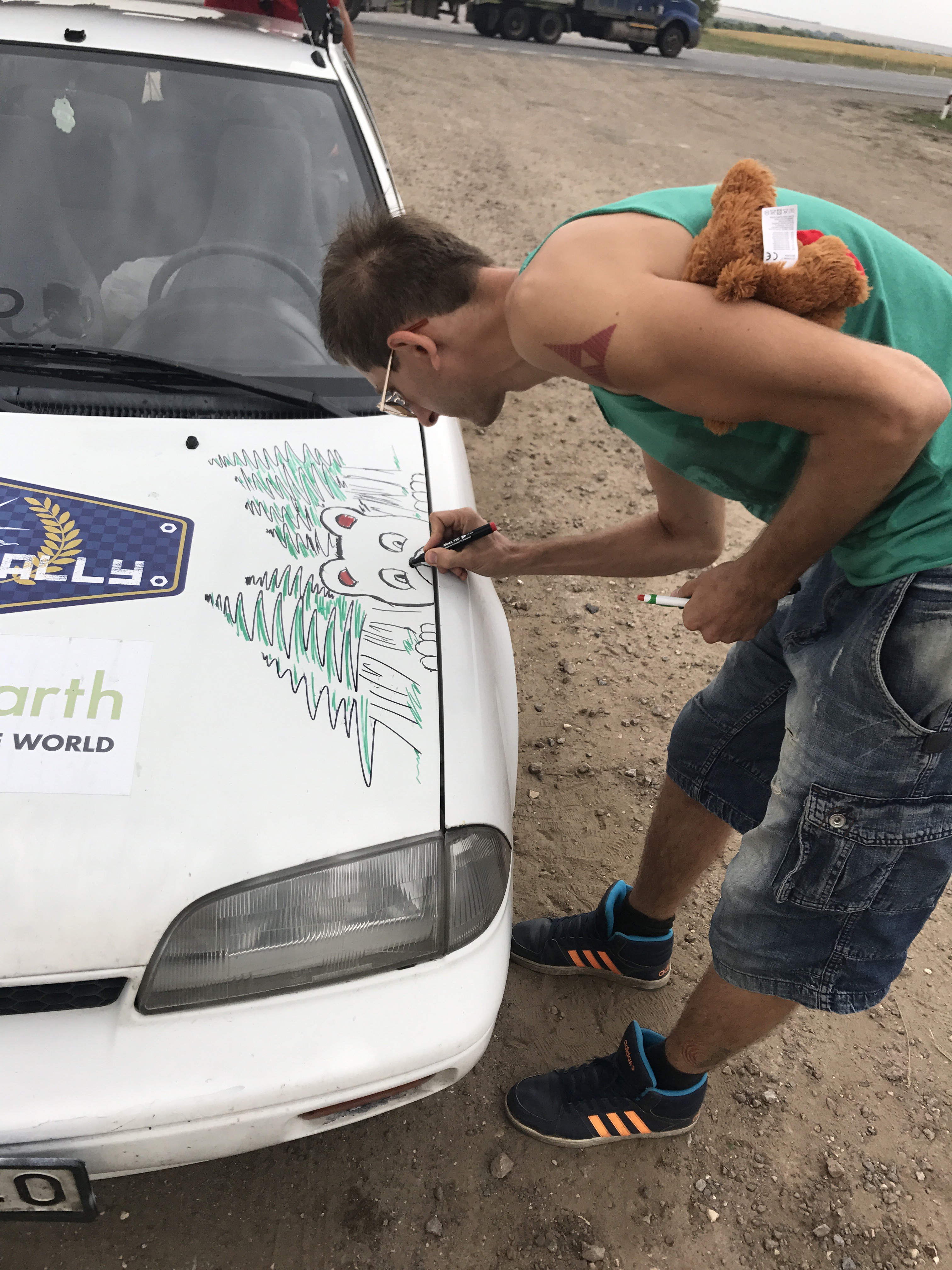 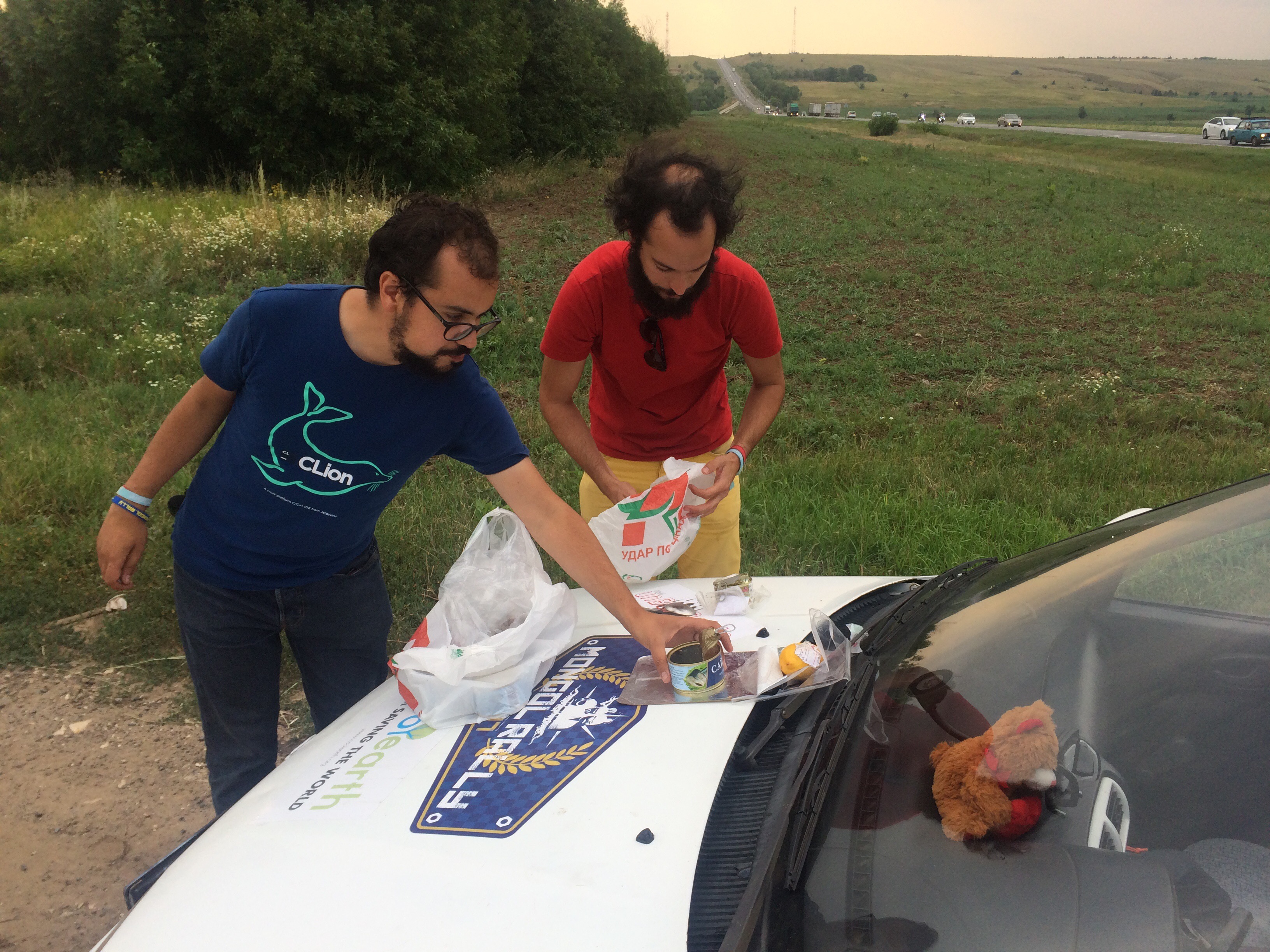 We immediately noticed how much higher the police presence was on Russian roads. Along the way to Volgograd we were stopped by police three times, all of which involved checking our passports and car papers and explaining the details of our trip. One check even involved getting out of the car and being led into some kind of office where they looked up our names in a computer. In there, several mostly Central Asian-looking people (one guy even wearing traditional Uzbek-style dress) were sitting and standing around being interviewed in detail about their situation. However we never had any actual problems today and were let go each time immediately after the police was sufficiently convinced we were who we said we are.

We noticed how the landscape started changing. In the beginning, Russia appeared very green and densely forested. As we got more south, it became much drier, and the trees started disappearing and being replaced by a yellow, dried-out grass landscape.

Around 8pm we arrived in Volgograd. The first impression was of a very nice and vibrant city with huge Soviet-style squares. We were staying in the Scotch Hostel, which I can fully recommend – very comfortable, cutely decorated, with a great Western hostel-style vibe and extremely friendly staff. We asked for a lockable room for ourselves, and they gave us a whole 8-bed dorm for no extra price. We then had dinner and beers at “Zhaba dushit” – a really nice art cafe with a whacky decor and stuffed frogs everywhere, as well as delicious food. 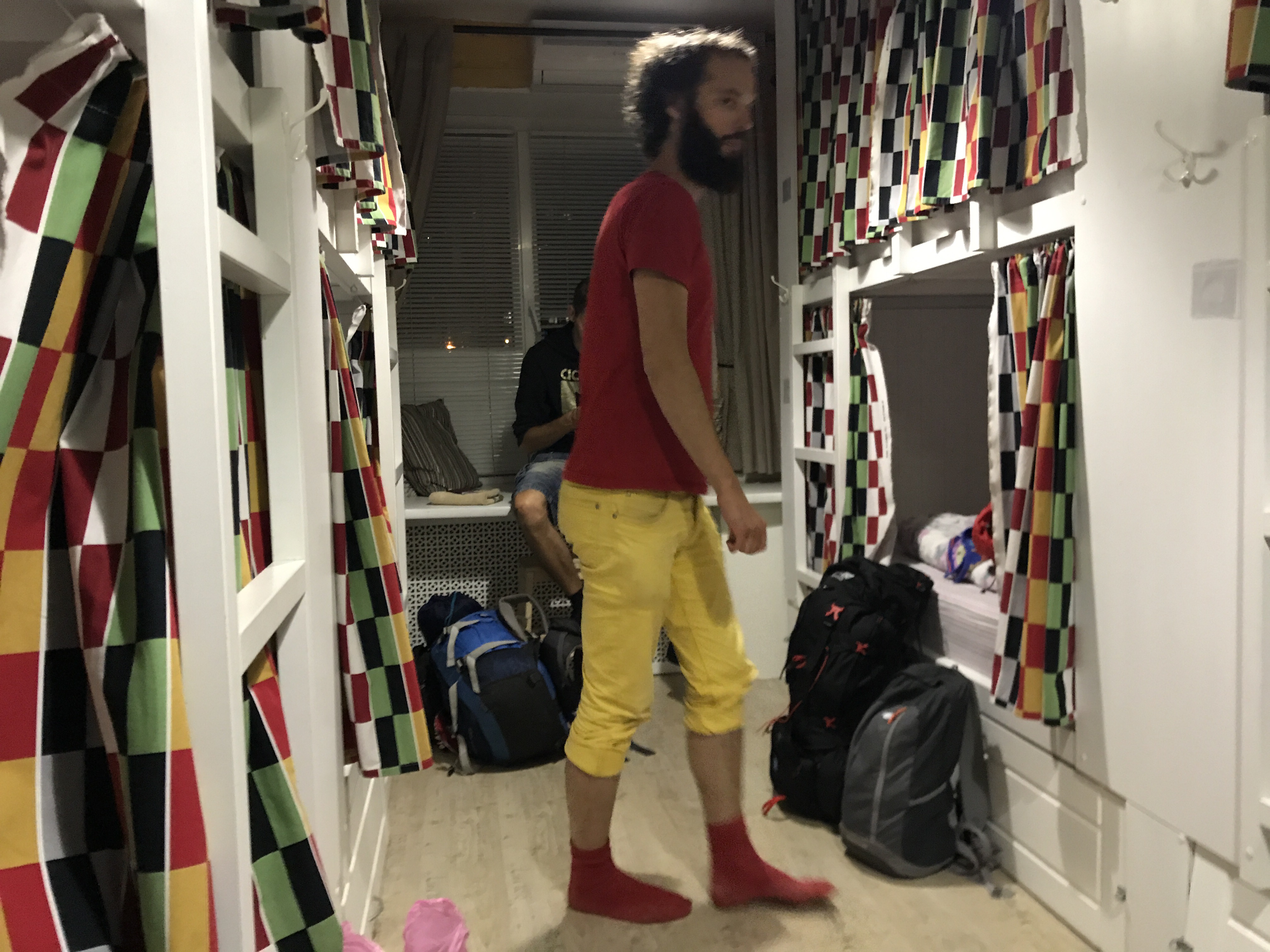 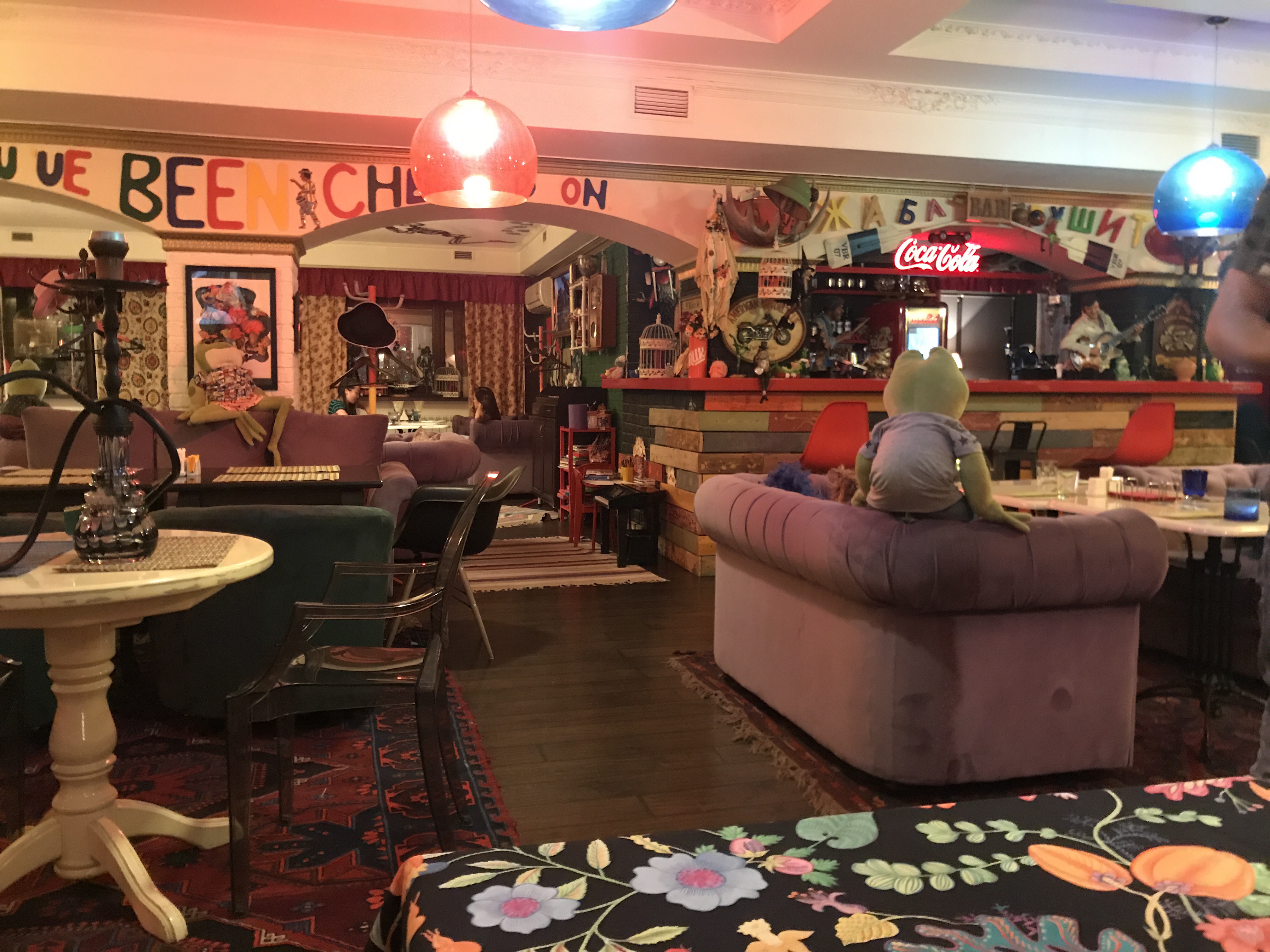 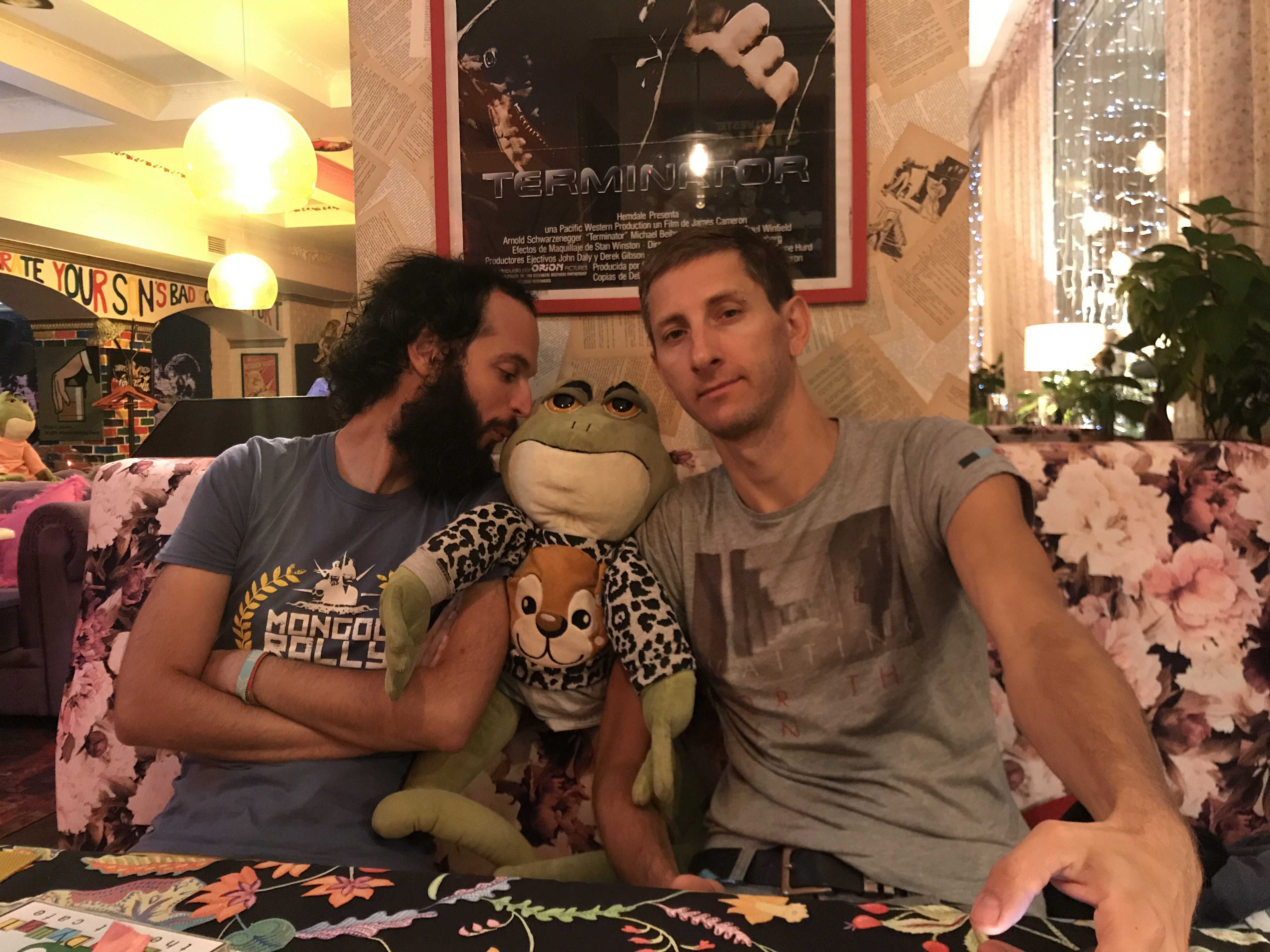 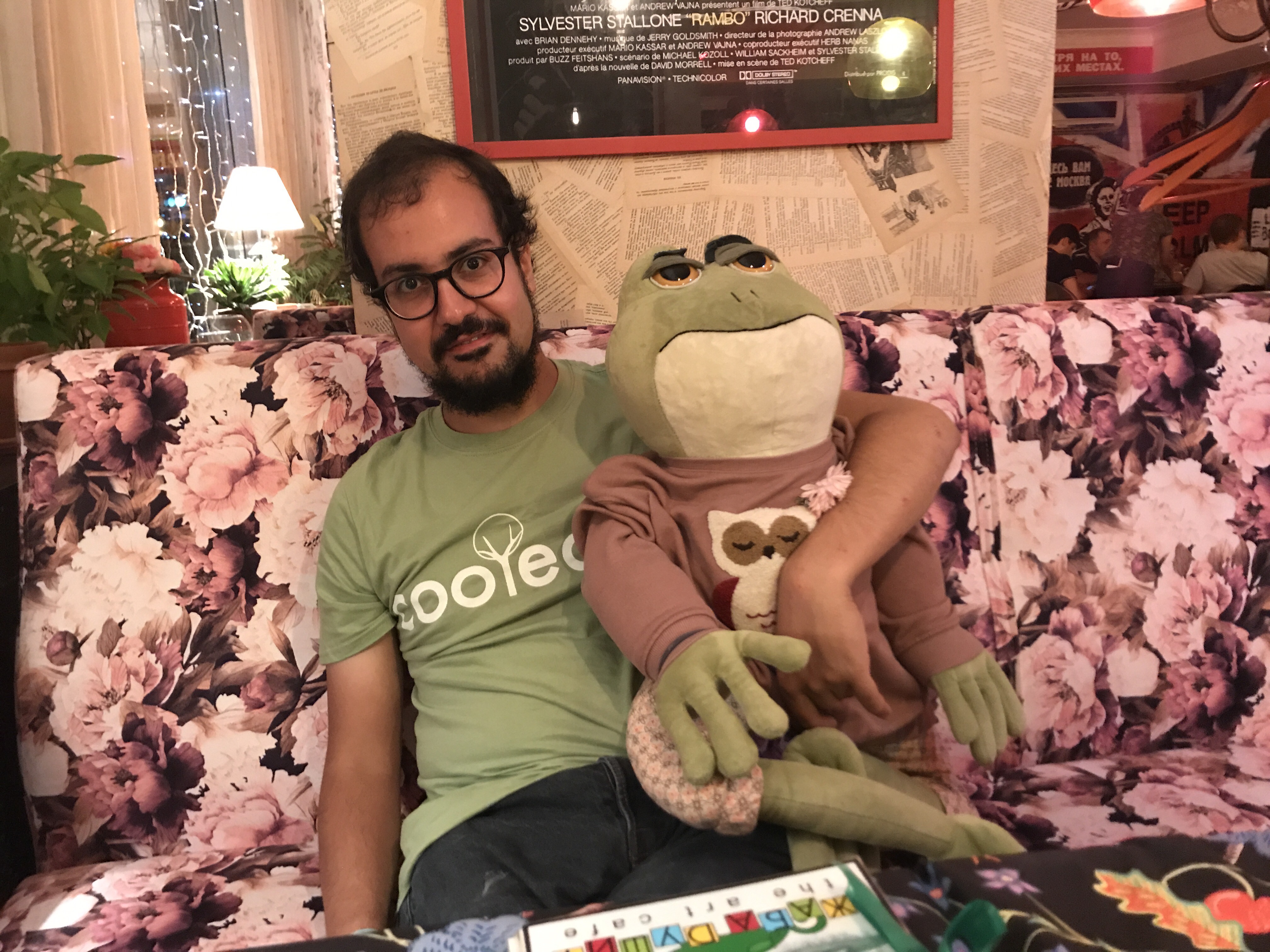 After the frog cafe, we decided to call it a night and get plenty of sleep before heading to Astrakhan on the Caspian Sea tomorrow. Russia is definitely treating us well so far!

One Reply to “Day 6: Into Russia, and on to Volgograd”