From the previous post you should have an idea which countries we will be driving through. Now, those are not exactly your average Western travel destinations. Can you grab your passport, get in the car, and just go there?

Welcome to the wonderful world of visa requirements for post-Soviet republics. Welcome to things like LOIs (letters of invitation), queues at Embassies and absurd forms. This is the single hardest thing to organise for this rally. We still haven’t sorted out all our visa problems – keep reading!

First of all, the good news. Apart from the EU countries, several other places along our route do not require us to have any visas and just let us drive through them: Ukraine, Kazakhstan, and Kyrgyzstan. Thank you, guys. We like you already.

Mongolia itself also has a reasonable visa system (I guess it’s just historically not Soviet enough). You fill out a form, you take it to the Mongolian embassy, and one week later you have this wonderful sticker in your passport: 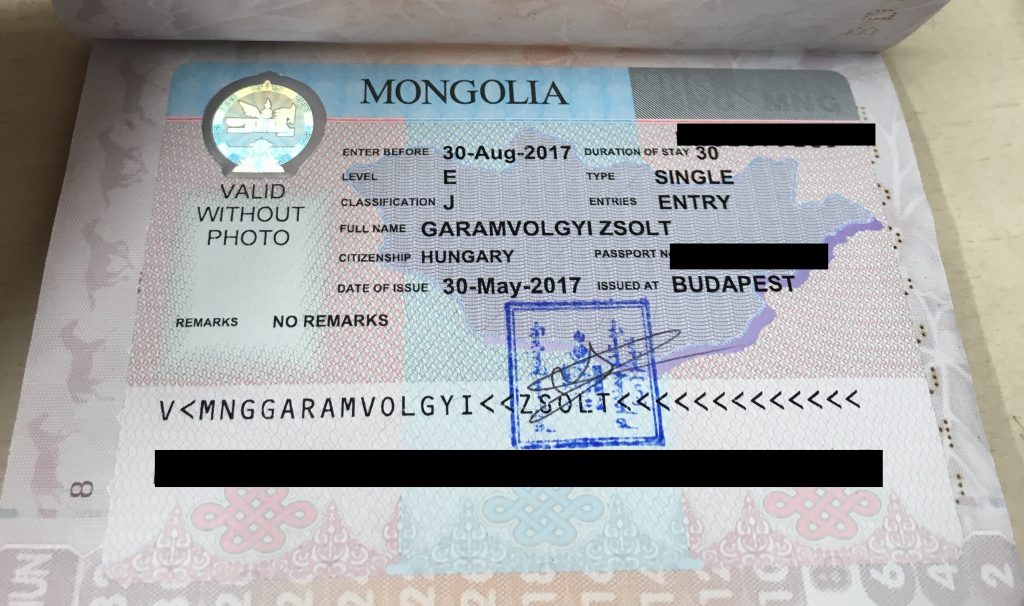 Eslie and Zsolt got this one quite easily with their Hungarian passports. It gives you access to Mongolia within 90 days of issue, for a maximum of 30 days. That’s definitely enough flexibility for us. Myself, travelling on a German passport, I even don’t need a visa at all for Mongolia (unfair, right?).

Tajikistan is also on the easy side: it recently introduced a new eVisa system. You apply for this eVisa online. You then get redirected to a very dodgy-looking payment site, where you pay $50 for the visa and an additional $20 for the permit to enter the GBAO (Gorno-Badakhstan Autonomous Oblast – that’s the special administrative region of Tajikistan that you have to drive through when crossing the Pamir Mountains). Next, you upload a bunch of scanned documents, and then wait. An hour or so later, you get a PDF file emailed back to you that looks somewhat like the electronic ticket to a concert (I really like the comical contrast between the all-serious coat of arms at the top and mister smiley face at the bottom): 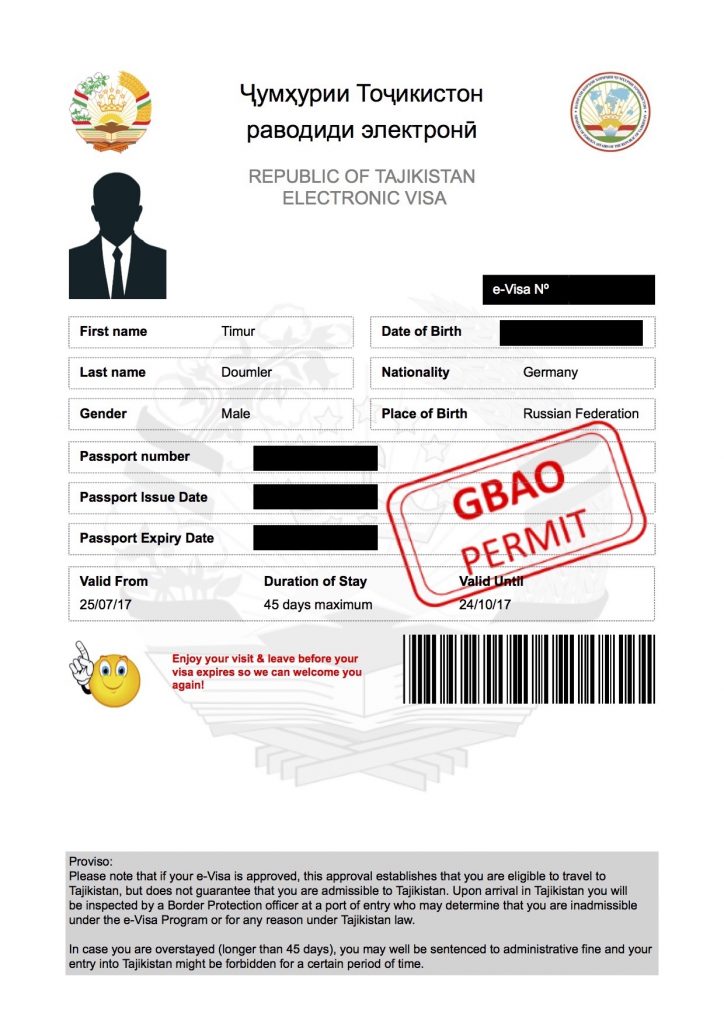 You basically print this thing out and take it with you when you enter the border. We heard that we should print it out in colour. Otherwise it doesn’t look “serious” enough to the border guards or something. Not that it looks serious in colour, with that weird clip-art thingy instead of a proper photo. And the GBAO permit is basically a really cheap printed-on fake “stamp”. Also, apparently not all of the border guards are familiar with this eVisa system yet as it seems to be a very recent thing. Hm, let’s see how this will go…

The next challenge was the Uzbekistan visa. Here, it again matters what kind of passport you’re on. For me and my German passport, the Uzbek visa took about 10 days in total to get. You fill out an online form, print it out, take it physically to the nearest Uzbek embassy (in my case in London), leave your passport there, come back in a week, get a piece of paper, take it to a bank, pay something like £100 there, get the receipt, take it back to the Embassy, to be finally reunited with your passport, containing this beautiful sticker: 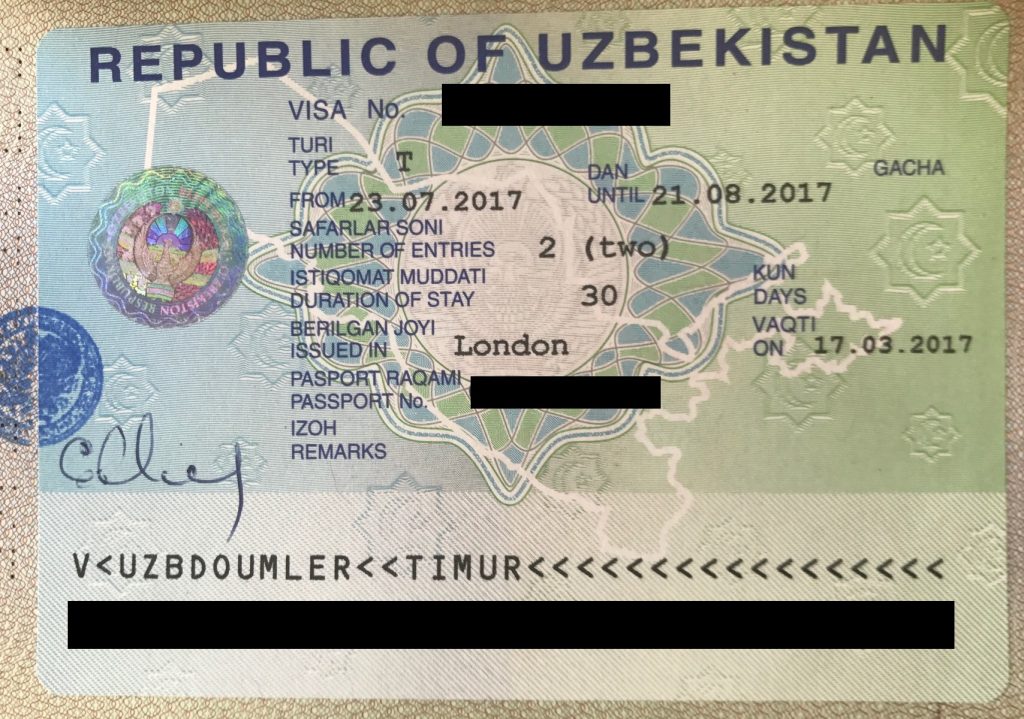 We opted for a double-entry Uzbek visa so we have the option to dash in and out of Turkmenistan to see Ashgabat and the Door to Hell, at the same time avoiding the extremely remote and unreliable Kazakh-Turkmen border crossing at Temirbaba.

Our Hungarians had to go through a somewhat more complicated procedure to procure their Uzbek visas, because on a Hungarian passport you first need to get a LOI from an Uzbek organisation before you can even apply for the visa. That’s basically yet another paper that takes yet another week or two to get, using the services of a visa agency, but it’s a reasonably straightforward procedure. Also, there is no Uzbek embassy in Hungary, so they had to fly their passports to London to get it at the embassy here.

Now we come to Turkmenistan. This is one of the really tricky ones. Apparently, Turkmenistan has more or less the same level of international isolation and personality cult going on as the DPRK (except they have no nukes so no one else gives a rat’s ass about them). So, just like when you visit the DPRK, as a Westerner you can only get a visa and visit the country if you book a tour and are accompanied by government-approved “guides” all the time wherever you go. Independent travel is not provided for.

Lucky for us, there is a special exception in place for Mongol Rallyers specifically. The Adventurists, organisers of the Rally, have a special arrangement with the Turkmen Embassy in London (for some reason they like us!). We were allowed to apply for a special Turkmen “Transit LOI” endorsed by the Adventurists. This is apparently some piece of paper that you have to print out and take with you. The Turkmens will then issue you the visa there and then when you rock up at the border crossing. Sounds good. Caveat: the whole procedure takes something like 4 months (!!) so even though we applied way back in March, we didn’t actually get the paper yet, and the Rally starts in a couple of days. The Adventurists promised to get it ready soon, so let’s hope we can print out this mysterious “Transit LOI” somewhere on the road when we get it (which will hopefully be before we reach Turkmenistan).

And, last but not least, Russia. For some reason, Russia is just an absolute pain in the butt when it comes to immigration rules. The basic rule seems to be that they turn every procedure into a hilariously complicated bureaucratic ordeal, just to make people’s lives more miserable. The other basic rule is that all the official rules keep changing all the time, so at some point you will inevitably end up accidentally breaking them and facing the consequences. I imagine we will experience this several times during the trip.

Our first actual problem is that our route requires three entries into Russia: one to get around the Caspian Sea, one to get from Kazakhstan into Mongolia, and one to get from Mongolia to the finish line in Ulan-Ude. Russia is simply so big it’s everywhere, and if you want to get anywhere it’s always in the way! Most of the other rally teams are choosing the southern route through Turkey, Georgia, Azerbaijan, and a ferry from Baku to Turkmenbashi to cross the Caspian Sea. We opted against this route for various reasons, one of them being that we’d really like to check out Chernobyl.

Anyway, three entries means that you cannot get a tourist visa, as Russian tourist visas can be only single- or double-entry and there’s a rule you cannot have two visas in your passport at the same time. There used to be other kinds of visas, such as “humanitarian”, “sports relations” and “cultural” visas. But conveniently, just this year, the Russian government changed the rules again so we can’t apply for any of those. The only kind of multiple-entry visa that we’re eligible for is a so-called “business visa”. We decided to go with these business visas: 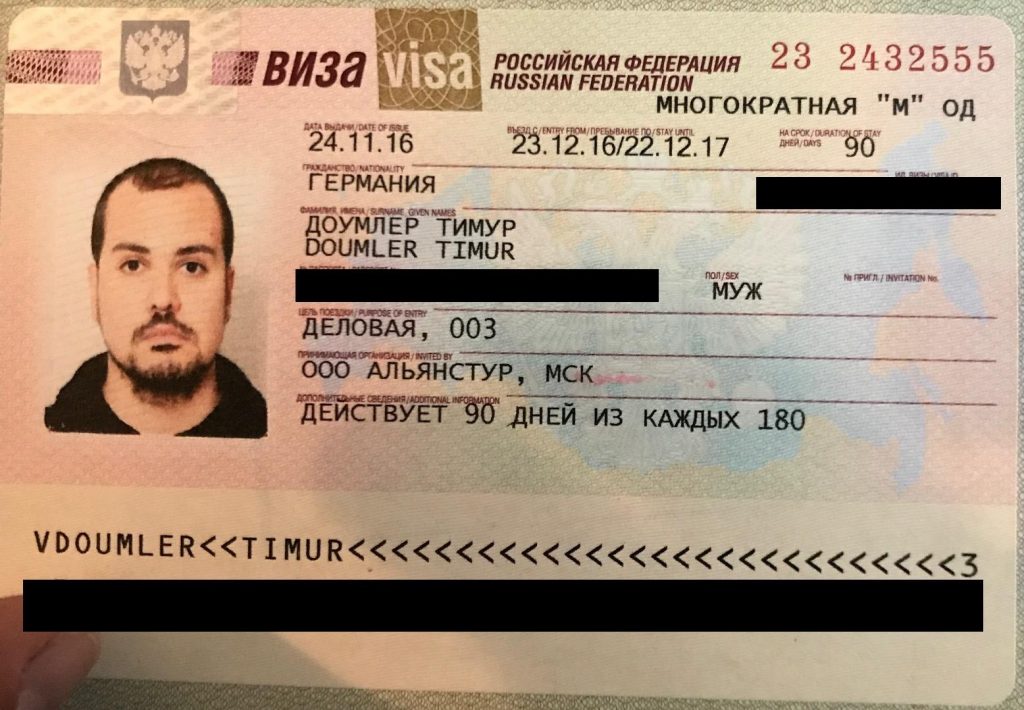 The problem with them is of course: we are not actually on business! Usually, when I travel on a Russian business visa, the border guards don’t ask any questions apart from: “Your purpose of travel?”– “Business.” – “Thank you”. That is, when I fly into airports in St. Petersburg or Moscow in a civilised manner. But what happens if we rock up at some remote land border in a beaten rally car, with big “Mongol Rally” stickers on the side, all smelly and unshaved and obviously not travelling on business? I tried to find out by asking around, and the answers I got were ranging from “no problem at all”, through “they probably won’t let you in” all the way to “you’ll be thrown into Russian prison for violating immigration laws”. Basically, no one knows. There are reports of people having succeeded with these kinds of visas several years ago. But there are also a lot of reports that this year, Russia’s immigration rules for EU citizens became much more strict (apparently, Putin didn’t like the move of the EU to grant visa-free travel to Ukrainians, and decided to retaliate). So we simply don’t know what’s going to happen to us. We’ll find out when we first get to the Russian border. I am excited.

The next challenge was to actually get those business visas for Eslie and Zsolt (I already had mine because I travel to Russia frequently). This involved a visa agency to get the “business LOIs”. Unfortunately, that agency turned out to be creepingly slow and utterly incompetent, and screwed it up really badly. After several months of drawn-out bureaucratic madness, and just a few weeks before the launch, the visa applications were finally submitted to the Russian embassy in Budapest. At this point it turned out that Eslie’s LOI was there, but Zsolt’s LOI somehow magically got lost in the mail between the agency and the embassy. WTF? By that time, it was way too late to re-apply for something else. He was told that there’s nothing they can do and the best he could get without that business LOI (which was £300 by the way) was a single-entry tourist visa.  In addition, it meant that the three of us would now be travelling on different kinds of visas, which might cause even more confusion at the border. We went with that anyway because there was no alternative, and had to endure the agonising wait to see whether we even get the passports back before the rally starts…

The good news: since today – four days before we launch! – everyone finally got their passports back, with some kind of Russian visa in it. So we are good to go at least through Russia once and then through all the ‘stans.

The bad news: Zsolt only has a single-entry visa. So our only chance to make it all the way to the end is to get a second Russian visa for Zsolt somewhere on the road, after we leave Russia for the first time, which may or may not be possible. We’ll try queuing at various Russian embassies in the Central Asian cities on our way, and hope that one of them has some kind of express visa procedure. Not helping is another brand new rule that you can in principle only apply for any kind of Russian visa in your country of residence. I imagine we will need to grease the hands of some Russian consulate staff in order to get around that rule…

So here’s the challenge: can we get a visa for Zsolt in one of the ‘stans? Will we arrive at the finish line? I am excited and slightly optimistic.

One more thing. In order to finish the Rally, we also have to raise £1000 for Cool Earth. We’re already 16% there at the time of writing – thanks a lot to everyone who donated so far! So please, if you want us to succeed and you like this blog, please click on the link below and donate a little bit. Maybe just the amount you would otherwise use to buy your coffee. It all goes into reforestation projects to battle climate change. We won’t use any of it for visa fees. Promise. Here’s the link:

Thanks, and until next time!