So, what is all this then?

We are Team unBEARable – Eslie, Zsolt, and Timur. Two dudes from Hungary and one half-Russian/half-German guy. We are still working on the official team photo. In the meantime, please find some mugshots below. 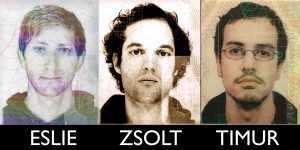 We are one of the teams on the Mongol Rally 2017. This means we will be driving 10.000 miles through a lot of countries called ‘stan, all the way to Mongolia. We will attempt this crazy trip in a tiny 1993 Suzuki Swift with an even tinier 1.0L engine that we bought for a few bucks from a Hungarian scrapyard – to raise money for saving the planet.

Our journey starts on 18 July in Prague, Czech Republic. We hope to arrive in Ulan-Ude, at the Baikal lake, by end of August. We don’t know yet what the availability of WiFi and/or internet cafés will be on the way, but we plan to regularly post on this blog to let you know what we’re up to. If you like to know how we bribe border guards, fix the car after breaking down at 4600 metres altitude, and steal camel milk from the locals to survive, you’re at the right place. Just follow this blog!

The goal of all this madness is to raise at least £1000 for Cool Earth. They do reforestation projects to counteract CO2 emissions and climate change. The cool thing about them is that they are doing this very cost-effectively and in a way that is actually transparent and quantifiable!

Why is this important? BEAR with me for a bit…

A while ago I got interested in a movement called Effective Altruism. The idea is based on the following. As someone living in a rich western country with a regular income, giving away a significant part of your money to a good cause is the right thing to do. You can actually logically derive this in a very convincing way. The argument goes back to the wonderful essay Famine, Affluence, and Morality by Peter Singer, a great philosopher whom I was lucky to meet once in London. I definitely recommend reading this essay – it’s reasonably short to be digested in a couple of hours, and might change your life forever.

Anyway, moving on. How do you decide where to donate your money? You see all these ads on the underground with big-eyed kids staring back at you, appealing to your emotions. Disaster relief? Cancer research? The problem with all this is that you don’t really know where your money goes and how efficiently it is spent to cause sustainable, positive change. Donating a hundred pounds to these charities is the equivalent of going into a supermarket, giving them a hundred pounds, and leaving it up to them what products, and how much of it, they’ll give you in return. Doesn’t sound like a good deal, does it?

Here’s another great recommended book explaining this problem: Doing Good Better. The bottom line is that in order to decide what charities are the best, you should not listen to your emotions. This is a very bad way of making good decisions anyway. Instead, the efficiency of various charities – basically, how much of a positive difference you can make per donated dollar – should be evaluated and compared on-site using scientific methods and verifiable data.

Now, this idea has been around for a couple of decades now. Today, there are actually several of such independent charity evaluators. One of them is givingwhatwecan.org. They list what they believe are the most effective charities for the causes that can make the most difference for saving lives worldwide – distributing bed nets to stop the spread of malaria, deworming children to fight deadly parasites, and reforestation to battle climate change (and, unlike Donald Trump, we think climate change is a pretty big deal). The interesting revelation is: as soon as we find ways of measuring the effectiveness of a charity (using units like e.g. the QALY), it turns out that the most effective charities are hundreds of times more effective at doing good than the less effective ones.

This is where Cool Earth comes in. Cool Earth is the most cost-effective charity they have identified to date which works on mitigating climate change through direct action, and also the overall most cost-effective climate change charity which can reliably reduce emissions without risk (higher-risk options include the advocacy charities Sandbag and the Citizens’ Climate Lobby). The estimate is that Cool Earth is able to reduce emissions by 1 tonne of CO2-equivalent for every $1.34 donated.

Long story short, if you like our Mongol Rally trip and are reading this blog, please donate now by clicking on the link below – and tell all your friends to do the same 🙂

In the next post, I’ll describe our route – or at least the route we are planning to take. No one knows what will actually happen.